The Title Says It All 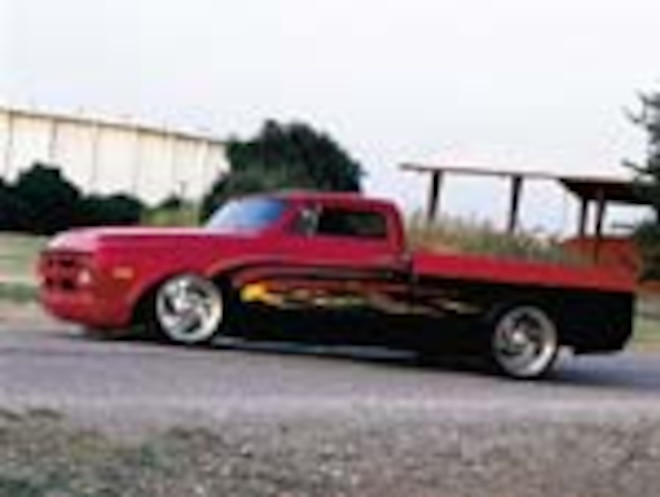 Jim Bayne is our kind of truck guy. He is everyone's car guy for that matter. Like so many of us, Jim is one who cannot simply leave anything stock for very long. Plus, already having seen three of his previous vehicles within the pages of as many McMullen Argus magazines, Jim knows what it takes to gain the necessary exposure from one of our magazine clowns.
What separates Jim from the average truck builder is his motto, "Not finished, but gettin' there." His latest ride sums up that statement perfectly. What began as a relatively nice show-type custom '68 GMC was soon transformed into its present day creation through a series of mishaps. The previous owner had already given the truck its 7-inch haircut, but Jim went one step further and completely reworked just about everything else on the truck.
Starting at the frontend, the stock front coil arm suspension system was cut away in favor of the more eye-appealing, airbagged, frame-layin' pieces seen before you. In place of the factory control arms are Chassis Tech dropped units featuring double convoluted Firestone airbags from Air Ride Technologies as well as all of the bracketry, air compressors, and air lines. An upgrade in roll control comes way via a new Brothers 1.25-inch sway bar. Rolling stock consists of a set of 18x8-inch Vision Custom Wheels covered in Yokohama P245/40ZR18 rubber. As a result of this truck being more than 30 years old, Jim felt braking technology was improved in the last three decades. Gone are the factory 33-year-old drum brakes. Full stopping force is applied through the use of later model Corvette pieces.
In the rear, Jim again went a little overboard. The factory five-link-style rear suspension was also removed and replaced with more of Air Ride Technologies pieces including bags, 3/8-inch air lines, and electric solenoids. To tuck the truck even closer to the pavement, a set of 2-inch CPP lowering blocks was fashioned to the coil spring perches as well as a major slice and dice to the framerails. These now sport a massive C-notch and a track locator or a Panhard rod to relocate and position the rearend correctly in the wheelwell. Significantly taller and wider 20x9.5-inch Vision Custom Wheels now reside in the back fender openings covered in Yokohama P285/ 30ZR20 rubber.
Part of Jim's addiction to truck customizing tells him never to stop. About the only individual who can stop the insanity is his wife Melinda who absolutely put an end to this project, at least until their daughter is born. However, Jim was able to persuade Melinda to let him at least finish the truck to the point seen before you. Under the hood, the stock small-block was rebuilt to stroker specifications by the previous owner who used a '78 small-block punched out 0.030 inches and now displacing 383 cubes. Fit internally to the motor was a stock 400ci crankshaft spinning stock rods fit with 9.5:1 compression pistons. Actuating the valves is a Comp Cams hydraulic tappet running 274/286 duration and 0.487/0.490 inches of duration, respectively. Topping the short- block are stock iron heads fit with an Edelbrock intake manifold. Added increase in power comes way via a B&M 144 Supercharger topped off by an Edelbrock carburetor. External dress-up accessories include Billet Specialties billet aluminum valve covers, an air cleaner, breathers, and numerous chrome-plated accessories. All exhaust chores are handled by a set of block-hugger, ceramic-coated Rodworks headers fit to a 2-1/2-inch Flowmaster exhaust system.
Artistically, Jim left many of the previous owners' body modifications including the chop top, but also improved upon the exterior sheetmetal in other areas. The front and rear bumpers were replaced with weld-in steel roll pans that dramatically cleaned up the vehicle's exterior appearance. A frenched-in radio antenna was added and many other items were shaved including the stock mirrors, all the emblems, the rear maker lights, the rear taillights, and the stake pockets. With the body smoothed to near perfection, Jim applied the coats of PPG Red and Black basecoats highlighted with PPG Orange and Yellow flames.
Inside, the truck is just as impressive as the exterior dimensions. Jim wishes he had air conditioning and plans are in the works for a custom Vintage Air Kit. For now, the truck boasts rich red tweed on stock late-model Chevy Cavalier buckets. Nestled comfortably between the buckets is a tweed-covered center console relieved from a '96 Chevy truck and serving double duty as added storage and housing for the air gauges. On the door panels, Jim fabricated a trick set of flames out of foam rubber glued to the inner door and covered each panel in more red bolts of tweed. The flamed theme was even carried over onto the headliner. Numerous billet interior trim items round out the completely functional look through the use of window cranks, door levers, a rearview mirror, a shifter, and A/C vents. The coup de grace of billet is the steering wheel complements of Billet Specialties. Cruising tunes are provided by an Audiovox head unit that is fed power from a pair of Kenwood amps wired together with Monster cable. Audio tunes are heard from a set of 6x9-inch speakers and dual Sony Xplode subwoofers mounted in an owner-fabricated subwoofer enclosure.
This is the kind of truck and story that most any enthusiast or car owner will understand. It simply doesn't matter what kind of vehicle it is; nothing is ever quite complete. Even the most professional of truck, car, and street rod builders in the world will comment, even to paying customers, that there were always areas even they feel could be improved upon. We would assume it is just the nature of the beast in every one of us always striving for perfection in some way, shape, or form.