One Low and Radical Tahoe 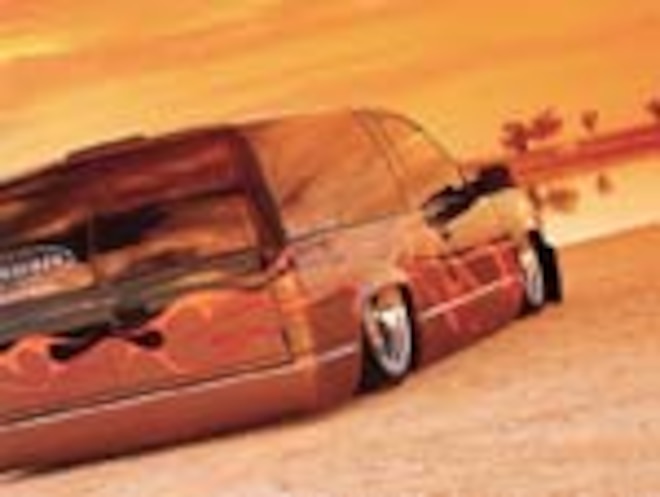 The images that danced through Kevin Blackshere's head were of body dropping, 'bagging, laying the rocker panels, and tucking 20s when he drove his '97 Chevy Tahoe off the lot in March of 1997. Kevin hails from Oklahoma City, and we caught a glimpse of his insane ride at this year's Truckin' Nationals in Phoenix.
Amazed at the first sight of this cutting-edge custom, we knew it would be among our batch of chosen feature vehicles for the Nationals. Kevin is a member of the Pleasures Trucks and Compacts car club, which is made up of several radical rides that push the envelope on every extreme. Being the past owner of two heavily modified custom pickups, including an '86-1/2 Nissan Hardbody and a '91 Chevy S-10, Kevin took his enthusiasm and his pocketbook to a whole new level with the Tahoe. The more-than-three-year customizing construction began with modifying the chassis and the body.
Resting the rocker panels firmly on the Oklahoma soil was a prerequisite for this project. So without hesitation, the Tahoe was delivered to Modern Customs in Oklahoma City to receive Firestone airbags on all four corners teamed up with Belltech spindles at the nose. Aiming to drag body and show up the competition at national events, Kevin had the Modern Customs crew perform a 3-1/2-inch body drop on the Tahoe, bringing its bottom side flush with the earth's surface. Tucked under the smoothed and modified sheetmetal are 20x8-inch front and 20x9.5-inch rear Colorado Custom Somerset billet wheels dressed in Michelin 245/40 ZR20 front and 275/35ZR20 rear rubber. This choice in rolling stock adds a conservative touch to the radical overall theme of Kevin's ride.
Now that the suspension alterations were complete, Kevin moved on to making his paint and body, engine, and interior modification dreams come true. The factory 5.7L engine was given a boost thanks to a Vortech supercharger, JBA headers, and a Flowmaster exhaust system. Thrown into the mix is an assortment of polished engine accessories for visual appeal. With the chassis and the engine modifications complete, the Tahoe was in desperate need of the right blend of body modifications and paint to make it a show-stopper.
Certain metal modifications and paint treatments tend to be replicated on various vehicles present on the custom scene. When Kevin set out to modify the Tahoe's factory body skin, he was looking for modifications that separated his custom cruiser from the shaved door handles and Cadillac taillights crowd. The ingredients used for a unique exterior are a shaved roof rack, a molded roll pan with a shaved license plate box, a shaved antenna, a shaved core support, and shaved fenders. Replacing the factory front sheetmetal is a '99 GMC Denali front end accompanied by a 2000 GMC Sierra front bumper. A billet grille insert was fit in place in the Denali housing to add that necessary custom touch to the front end. Once the last rough weld was ground smooth and the body was perfectly straight, Jason Farley of Affordable Customs in Irving, Texas, began to lay down some color. Dark green was used as the base color, which is complemented by orange tribal flames that have been stretched from front to back and around the rear end. A colorful hood graphic using yellow, orange, and red spices up the top of the Denali hood.
Since the Tahoe's completion, Kevin has been showing it like crazy at events including the Truckin' Nationals, the West Coast Nationals, Spring Splash, and Texas Heat Wave, collecting an Editor's Choice award and Best of Show honors for his efforts. Kevin would like to thank his family, Pleasures Trucks and Compacts, Modern Customs, Affordable Customs, Colorado Custom, and Empire Motorsports for all their help and support with the project. Resting Rocker pushes the envelope of truck customizing while it blends cutting-edge modifications with tasteful style. Kevin informed us during the photo shoot that the Tahoe is up for sale. We will definitely be on the lookout for Kevin Blackshere's next hot custom creation.
Inside Innovations
The inner confines of Kevin's two-door people hauler features tan tweed and leather threads sewn over the factory seats. Billet accessories from Empire Motorsports and a Colorado Customs Somerset billet steering wheel add an extra dose of custom medicine to the cockpit. The headliner was adorned with seven layers of flame patterns to capture a hot rod theme and to replicate the flamed exterior paint scheme. To update the dash, Kevin simply pulled the pod around the gauges and the air-conditioning vents free, painted it to match the exterior green color, and reinstalled it to contrast against its light-tan-colored surroundings. Opening the back doors reveals a custom tweed cargo area covering the fuel cell and providing a resting place for the air tank. The craftsmanship on the inside of this belly dragging cruiser is definitely top shelf. 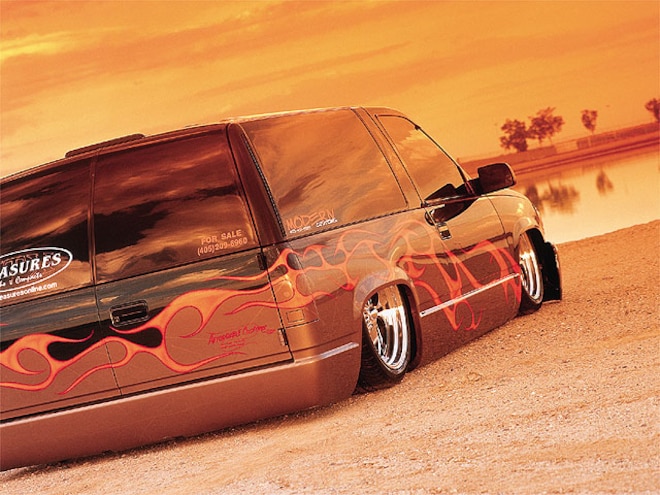 View Photo Gallery | 12 Photos
Photo 2/12   |   Just like an artistic painting, this body-dropped masterpiece is amazing to look at on every surface. The way it buries the 20-inch Colorado Custom billet wheels deep in the fenders while gracefully laying the rocker panels flat on the asphalt is incredible. 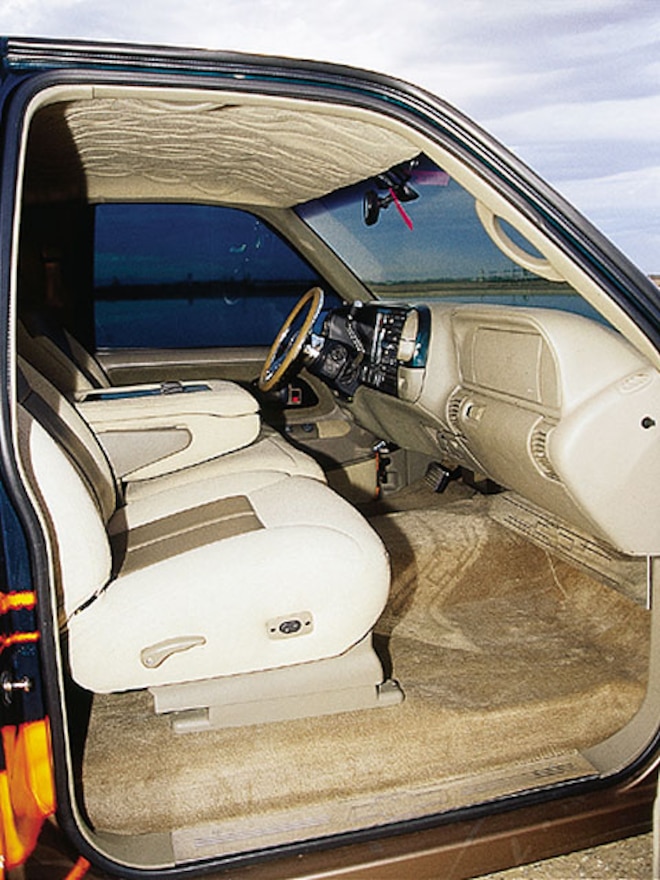 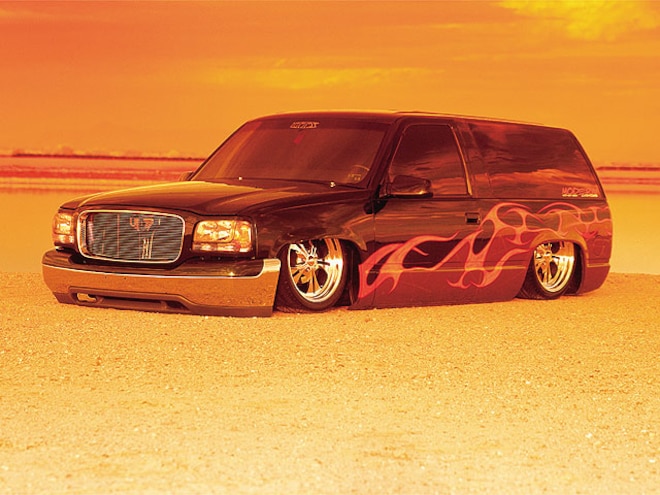 View Photo Gallery | 12 Photos
Photo 8/12   |   A creative design of orange tribal flames was applied to the smoothed and modified body. These hot licks, when viewed from any angle, make the exterior come alive. 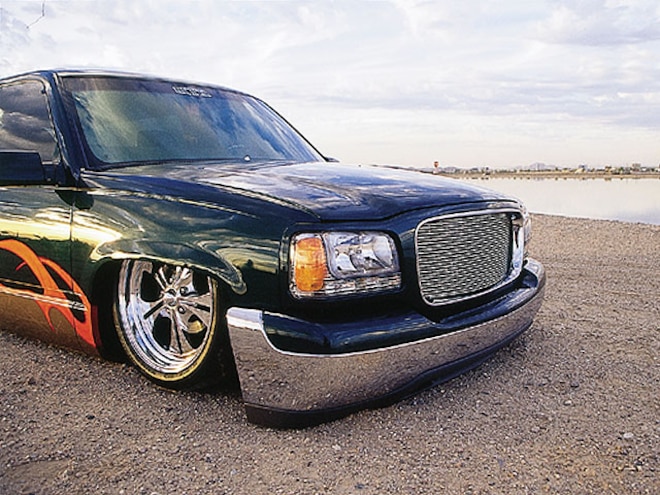 View Photo Gallery | 12 Photos
Photo 9/12   |   The factory front end was ditched in favor of a 2000 GMC Denali unit complete with a billet grille insert. Instead of using the Denali bumper like most other enthusiasts do, Kevin chose a 2000 Sierra bumper to slightly alter the overall look. 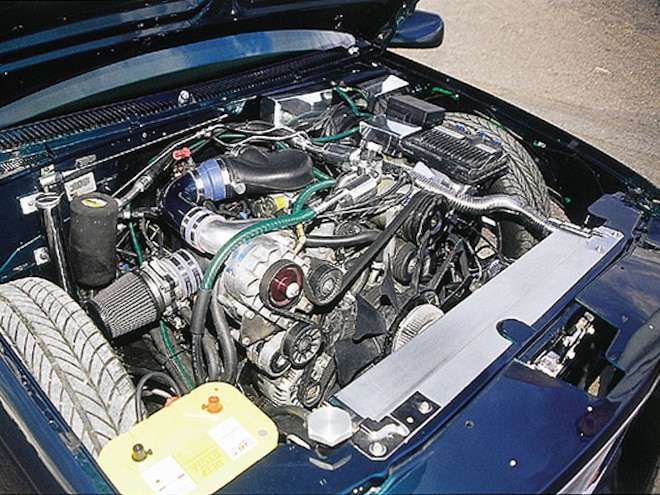 View Photo Gallery | 12 Photos
Photo 12/12   |   The factory 5.7L engine was massaged with a Vortec supercharger, JBA headers, and a Flowmaster exhaust system. The engine was detailed and cleaned within an inch of its life with the use of several polished components.