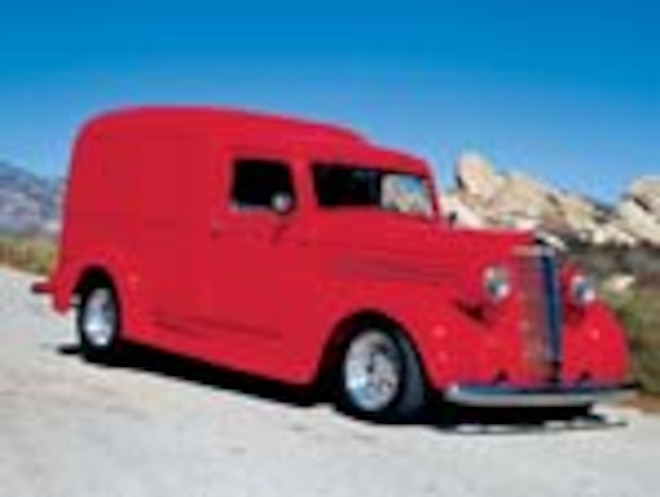 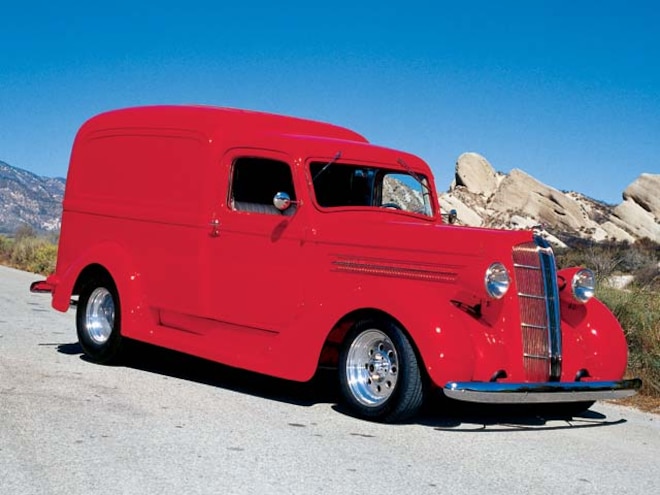 View Photo Gallery | 21 Photos
Photo 2/21   |   What better color for a rare Dodge truck than bright red? The Major's '36 Humpback Panel is one of fewer than 150 built that year. After 10 years of rebuilding, Jim and Barbara Major have an outstanding early street truck that is a show winner as well as a super cruiser.
Have you ever seen something that you wanted to buy, but didn't for one reason or another and regretted it afterward? All of us have probably done that numerous times. That was the case for Jim and Barbara Major as they walked the Pomona, California, swap meet more than 20 years ago. They were the proud owners of a reworked '37 Plymouth and were at the swap meet just to see what was there. They stumbled onto an old Dodge panel truck, which was neat-looking in an odd way. Its panel body was kind of humpy and very different from most panel trucks. Since the Majors had an affinity for Chrysler cars, the panel drew a stronger than usual interest. However, they resisted the urge to get serious because they were in the process of moving to Northern California and did not need a new project. 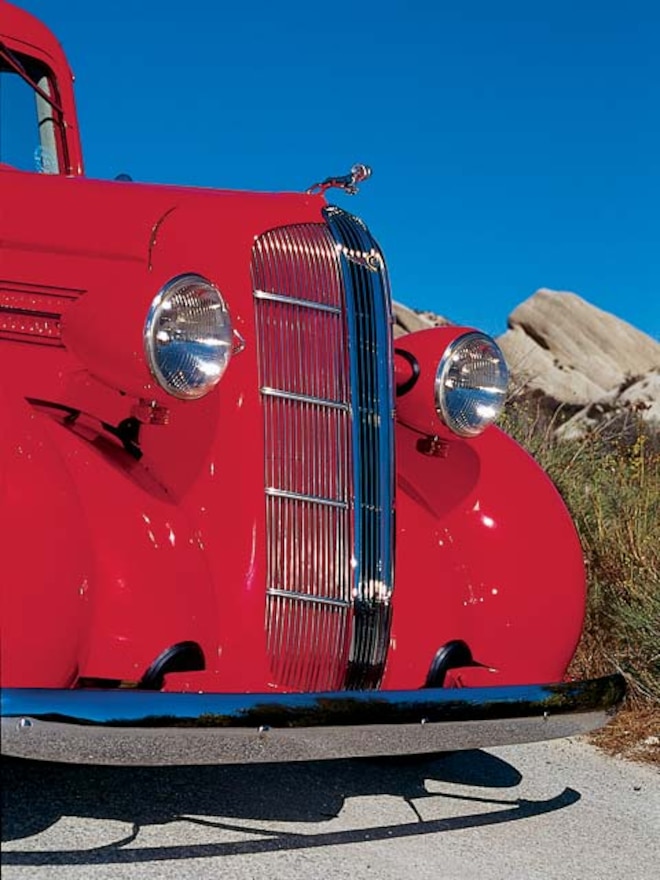 View Photo Gallery | 21 Photos
Photo 3/21   |   From any angle, this early Dodge looks really sweet. It sits low but has good ground clearance for a truck that is driven all the time and sits on a rake. The larger rear body may look like someone grafted a 3/4-ton rear section to a smaller 1/2-ton front portion, but that's the way Dodge designed it. The model is rare and very few exist today. The Majors did a great job of bringing the panel back to life.
That Dodge panel left an image in their minds that would not go away. About three years later, Jim spotted an advertisement in Hemmings that caught his eye: "'36 Dodge Humpback Panel truck. Has been sitting for some time and is in poor condition but is mostly all there." The truck was in Washington state and was within range of what they were willing to pay, so they bought it. They took a trailer to pick it up, but once they saw it, they weren't sure it was worth taking home. But they had made a deal, and towed it away.
Over the next 10 years, Jim and Barbara worked on the project. Jim was able to do all of the chassis and bodywork, and it was very rewarding to watch the rusty hulk come back to life. In addition to the truck having most of its stock trim pieces, it was a very rare model. Because of Jim's research, he now believes that there were only 150 of these Humpback models built, and that fact alone made the project a challenge. Being a street rodder, Jim had to have the running gear updated, but the stock appearance was what they both liked.
The chassis has been completely updated. The framerails were boxed in where it was needed needed. Jim went with a Mustang II front suspension for his panel. A Heidt front crossmember was used to install the independent suspended frontend, which uses stock Ford parts, including a set of disc brakes and rack-and-pinion steering. Jim installed a Morrison Pro Street ladder bar kit to go with the narrowed Ford 9-inch rearend. Ford disc brakes were also fitted to the rearend. The Morrison kit supplied the coil-spring setup along with the ladder bars. He used KYB shocks all around.
Being a Mopar man from way back, Jim did the right thing and selected a Dodge 340 small-block to provide the power. He selected a '72 engine that he farmed out to Motor Machine in Sacramento, California. Jim's instructions were to rebuild it to stock form, because Jim and Barbara wanted a totally reliable motor that would function just like one found in a new car. The entire project was done with that in mind. It was to be a classy driver and one that ran without any problems. Jim added the Offenhauser Tunnel Ram intake manifold, which he had ported to match the stock heads that were surfaced and ported.
Jim completed all of the body rust fixes and additional body repairs over the long 10-year period that the Majors owned the truck. The exterior remains stock, since the Majors like the look of the truck and wanted only to drop the stance some and make it reliable. The paintjob was handled by Mike Weninger at Turner Nisson's Body Shop in Sacramento, California.
Two different materials finish off the interior: Leather was used in the front portion and oak wood covers the rear area. It is refreshing to see a sweet machine such as this one, and it is refreshing to see a wife who is into it enough to do some of the major work. Barbara is good at refinishing furniture, so she took on the task of finishing the inside rear area. The Majors also had some help from good friends Bob Ijams and Mike Hall.
This entire project really came together well. The exterior retained the stock look, but the bright-red paint and lowered stance makes it look right at home at any major street rod or truck event. Jim and Barbara's Mopar is a real beauty.

- OF
By Don Emmons
8 Articles