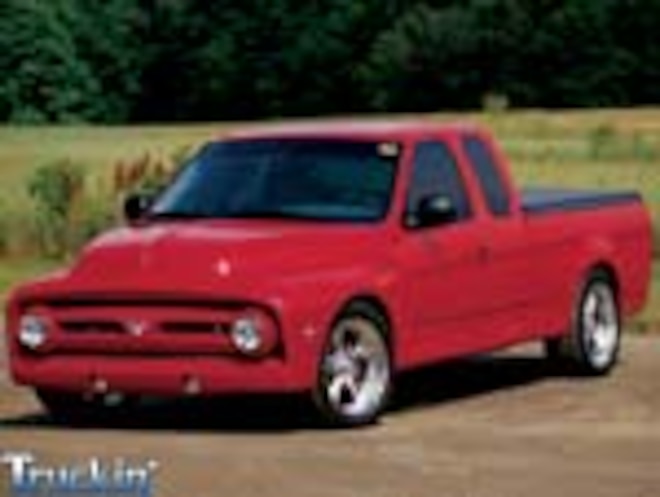 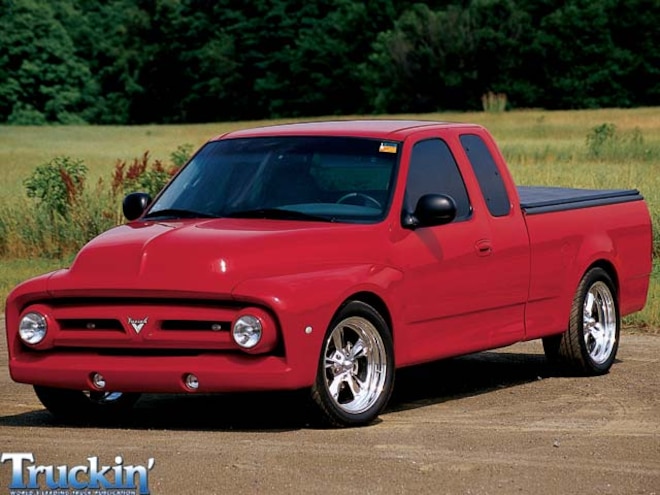 View Photo Gallery | 14 Photos
Photo 2/14   |   2000 Ford F150 front Side View
Fuzion (fyoo'zhen) n. 1. A melding or blending together. A reaction of two elements combining to form a new element with the release of great energy. 2. A new breed of truck from Fuzion Motors LLC that combines the classic good looks of the '53-'56 F-100 with a current-model F-150 resulting in one badass ride.
A few years ago, a man from Sylvania, Ohio, by the name of Frank Ragone had a vision. He was checking out the current-model F-150, brainstorming for customizing ideas that would transcend the typical fare of billet grilles and clear corners. He decided that the look of today's F-series pickup simply didn't hold a candle to the clean lines of his all-time favorite truck: the '53 F-100. Frank was just 10 years old when the new Effie was introduced and he's had a soft spot for it ever since. 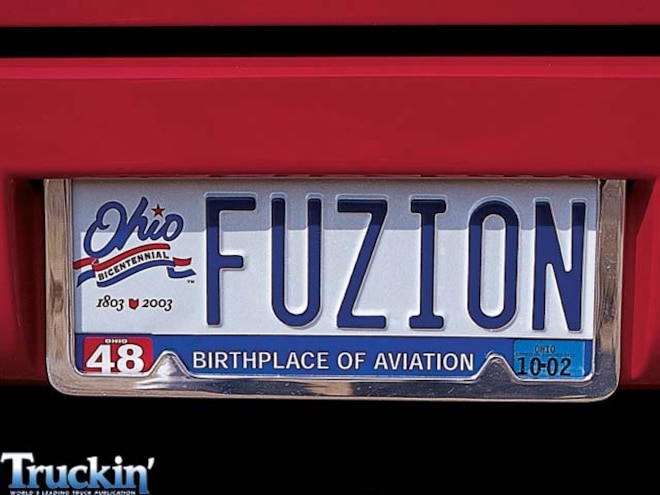 View Photo Gallery | 14 Photos
Photo 3/14   |   2000 Ford F150 license Plate View
Eventually, Frank got the idea to meld the two together. An engineer by trade, Frank had the wherewithal for the task at hand, but it was a long process. A few simple measurements of F-series new and old showed that the overall width of the two vehicles was nearly identical; however, getting the height of the cowl down to size would prove to be quite a feat. Soon, a series of renderings were drawn up, followed by a 1/18-scale model. Frank then began to scour the country for an assortment of the cleanest Effie hoods, fenders, and grilles to produce a steel prototype from.
Close to a year of nights and weekends were spent by Frank and his talented metalworkers, beating some modern curves into the vintage sheetmetal and smoothing them out on the English wheel. After much persistence, a steel prototype front end was completed, and from there, the tooling was prepared to make the components from fiberglass. When the finished products were bolted into place on Frank's '00 F-150 SuperCab, they looked right at home and fit perfectly. The final fitment test came when Frank bolted up an original '53 F-100 grille to his retro front end -- another perfect fit. Elsewhere on the truck, the rear bumper was scrapped and a Fuzion-built fiberglass roll pan was installed. The hybrid truck was reshot in the original factory Ford red before the halogen headlights, turn signals, and driving lights were installed onto the front end. A custom soft tonneau was added to cover the bed area, and Fuzion logos were added to the grille and tailgate. 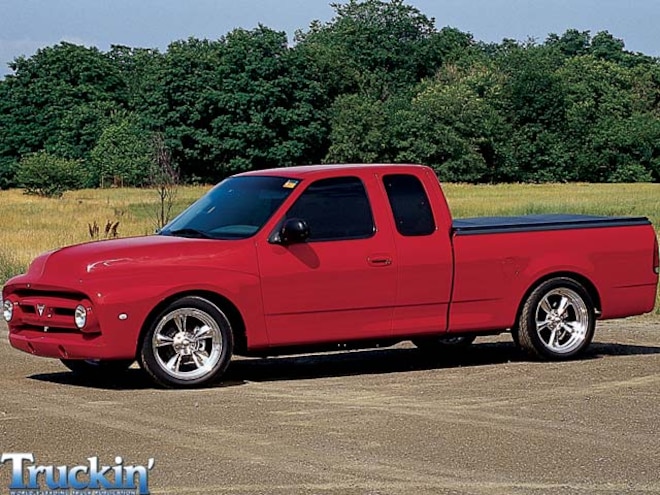 View Photo Gallery | 14 Photos
Photo 10/14   |   The stance is provided by a 3/4 drop from Belltech. The hot rod rake looks right at home with the Effie front end.
To gain the true Effie custom look, Frank knew the front end needed to be a bit closer to the ground. Up front, 3-inch Belltech coils replaced the stock components, and a 4-inch hanger and shackle kit was installed into the rear. Belltech shocks were installed in all four corners for stability, before a set of 20x9.5-inch Colorado Custom Slotted Lazear wheels was outfitted with a set of P295/40ZR20 Eagle HP tires from Goodyear.
Besides some clever rearranging under the hood, things remain mostly stock. The 4.6L V-8 was outfitted with a K&N air intake up top and down below, and the stock exhaust was replaced with a Flowmaster after-cat exhaust with signature Fuzion tips.
The Fuzion theme was continued into the interior as well. Lincoln Navigator leather upholstery was installed, and the seatbacks were embroidered with the Fuzion logo. The steering wheel, gauge cluster, and several trim pieces were also upgraded with Navigator pieces. 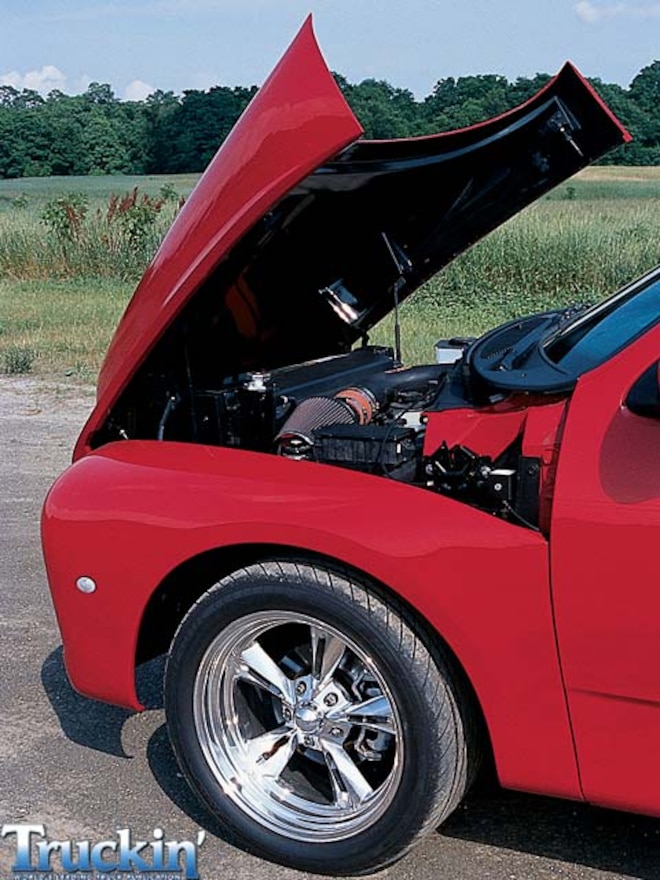 View Photo Gallery | 14 Photos
Photo 14/14   |   2000 Ford F150 hood View
Fuzion Motors sells its creations as complete units and will build to suit, using anything from a standard cab Flareside to an Expedition. There are also other options available, such as superchargers, brake upgrades, moon roofs, towing packages, and a show-finish bed area. Frank has definitely found a winning combination with the Fuzion hybrid, and the public is responding well. He has taken seven First Place trophies in the past six months, including one at the All Ford Show in Dearborn, Michigan. So when building your next vehicle, look past that honeycomb grille and imagine the possibilities.