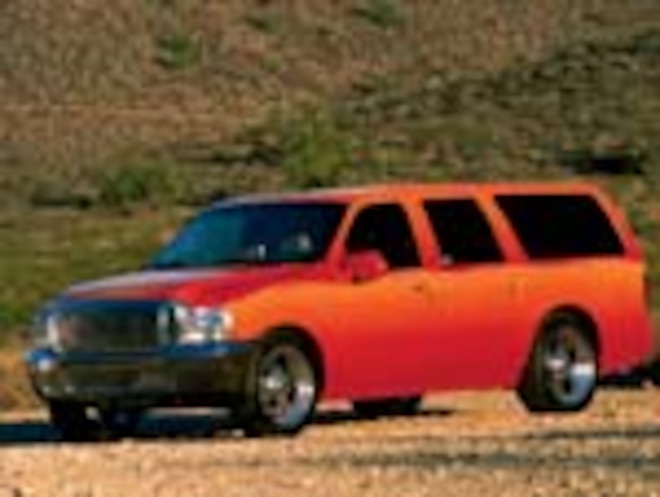 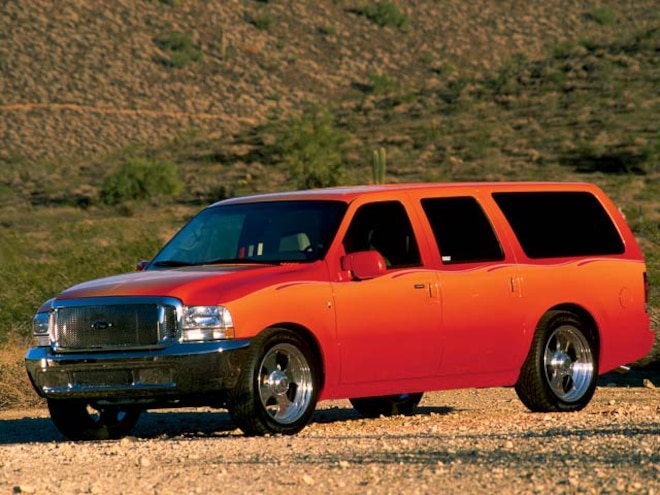 View Photo Gallery | 11 Photos
Photo 2/11   |   2002 Ford Excursion front Side View
Rick Dore certainly knows how to mix a good drink, as demonstrated by this '02 Ford Excursion. Dore, owner of Rick Dore Kustoms, in Glendale, Arizona, has earned a strong reputation based on the radical custom cars and trucks he has created over the past 15 years, some that were old school and some brand new. He has been the brains behind several Best of Show at SEMA cars and trucks, has won World's Most Beautiful Custom three times, and has won both Custom Car of the Year and Custom Truck of the Year. Rick took his knowledge and experience and put it to work on his latest vehicle. 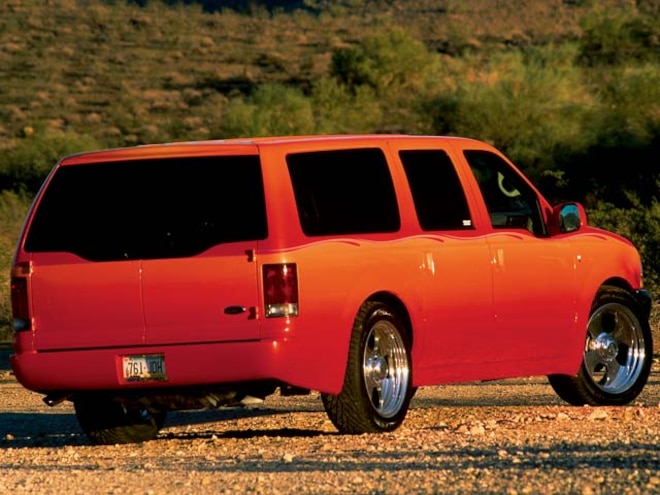 View Photo Gallery | 11 Photos
Photo 3/11   |   The Excursion was lowered 3 inches in front and 4 in the rear. Making it look even closer to the pavement are extended body panels on the sides and in the rear. In addition, the rear bumper was modified and the license plate frame was frenched in. The body was coated in Tequila Sunrise, a combination of custom-mixed PPG paints.
Custom creations are made to catch the eye, and this Excursion, named On The Edge, was given paint and bodywork that wouldn't disappoint even the most experienced of show-goers. Robert Stewart and Rick Dore did most of the bodywork, adding 4 inches to the bottom of the rocker panels and 6 inches to the bottom of the back of the Ford, behind the rear wheels. This worked with the 3/4 DJM lowering kit, installed by Stewart, to make the Excursion look even lower and closer to the ground. In addition, the rear bumper was radically modified to work with the new body mods, and Concept Works, in Tempe, Arizona, frenched in the license plate frame. Up front, Distinctive provided the bumper, and the grille shell was filled with Street Scene billet. Doug Jerger, at Squeeg's Kustoms, in Mesa, Arizona, applied the custom-blend PPG Tequila Sunrise paint. To protect the fantastic paintjob on this custom beauty, Rick applied StarShield paint protection, an invisible layer that defends against rock chips and road debris. The Excursion has 22x10-inch Colorado Custom Flat Irons and 305/40R22 Toyo Proxes S/T tires.
While the Excursion was given show-stopping good looks, it was also built with features that provide plenty of power for the multi-ton beast. SVC Motorsports, in Scottsdale, Arizona, installed a Vortech supercharger on the Ford V-10, and Mighty Muffler, in Phoenix, bolted the Gibson exhaust system onto the back of the engine. The heavyweight sport utility now gets up to speed in a hurry. 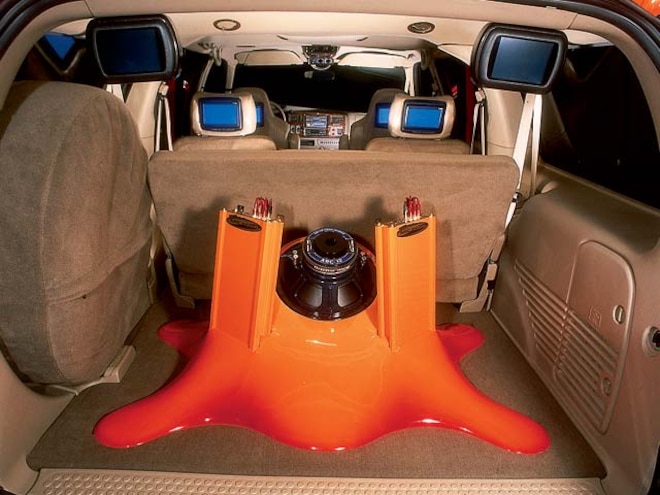 View Photo Gallery | 11 Photos
Photo 4/11   |   The cargo area was treated to a custom enclosure, which was also painted with Tequila Sunrise. It houses a 12-inch Arc Audio subwoofer, one Arc 800-watt amplifier, and an Arc 1,000-watt amplifier.
On the inside, Benevento provided the wood trim that adorns the dash, doors, glovebox, and center console. A complete mobile electronics system was also installed, making its presence known in the dash, doors, sunvisors, seats, and cargo area. A motorized Accele LCD screen and DVD/CD head unit were added to the dash, and a 4.5-inch screen was installed in the passenger-side sunvisor. Four Accele 8x6-inch widescreen swivel monitors were added to the first- and second-row headrests, a pair of screens was added in the cargo area, and there are screens in each cargo door, making a total of 10. Cardenal Electronics, in Glendale, installed all of the video gear, as well as the audio components, which was a considerable undertaking. The entire audio system is made up of Arc Audio gear, including the new speakers in the stock locations, the 800-watt amp and the 1,000-watt amp, and the subwoofers. A 12-inch subwoofer was installed in a custom Tequila Sunrise enclosure in the cargo area with the amps, and a 10-inch sub was put in a custom Rick Dore-built console that fits between the captain's chairs in the second row. 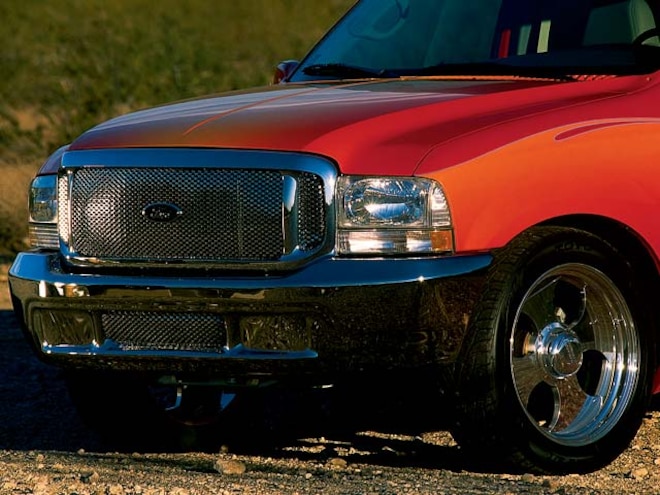 View Photo Gallery | 11 Photos
Photo 5/11   |   2002 Ford Excursion front Side View
You would think a vehicle that looked this good would take up all of Rick Dore's time. However, he still found a way to do other projects, and currently has three new ones to keep his hands full: a '40 Ford Zephyr pickup and two brand-new Ford vehicles. As if that were not enough, he has also been developing aftermarket hoods and grilles, and somehow finds the time to take his project vehicles to shows. He has quite an impressive gallery of vehicles, which can be seen on www.rickdorekustoms.com. However, if you can't visit the Web site, we can just about guarantee you'll see more of his work in the pages of Truckin'.