One Hot GMC With All the Right Licks 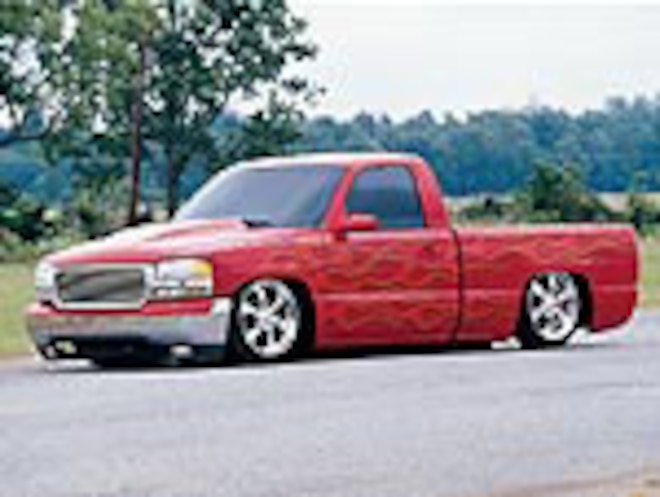 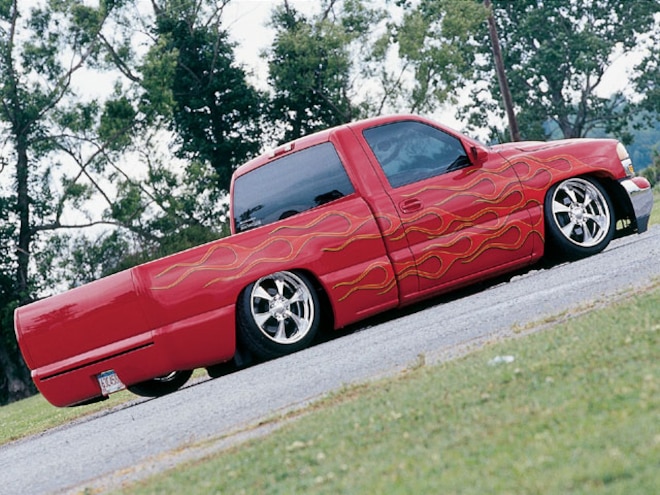 View Photo Gallery | 12 Photos
Photo 2/12   |   2000 Gmc Sierra rear Passenger Side View
Are truck enthusiasts born with a knack for customizing vehicles, or do they develop their passion for custom trucks by learning it from their parents? This question brings to mind the nature versus nurture debate, and, ultimately, there really isn't a definitive answer. For Jason Mattison, of Northport, Alabama, though, building custom vehicles was definitely a learned behavior.
"Dad got me started customizing vehicles at an early age," he recalls. "He is a street rodder, so he got me interested in vehicles and helped me out with my first vehicle at the age of 15." So it stands to reason that Jason's latest creation, a 'bagged and flamed '00 GMC Sierra, has roots somewhere near the family tree.
Like many projects, Jason's custom was rescued from a used car lot and brought home to be transformed from basic transportation to cool street machine. The first order of business was giving the truck the right altitude adjustment. Chassis Tech drop spindles and Contitech airbags replaced the stock spindle and spring up front.
With the front setup in place, the truck was wheeled to Ground Pounder Customs for a completely new rear suspension. Out back, the original leaf spring setup was scrapped in favor of a two-link suspension from Ekstensive Metal Works. To give the truck an earth-hugging stance, a Monster Notch from Silver Star Customs was grafted into the frame. According to Jason, he and his father-in-law Terry Tyner, with friend Chad Skelton, reworked the rear suspension a few times to get it right. The rear rides on Airlift airbags, while the whole air system uses 3/8-inch lines and ODE Black Max air valves. For rolling stock, Jason chose 20x8.5-inch Billet Specialties SLX26 wheels wrapped with 245/40R20 Falken tires. 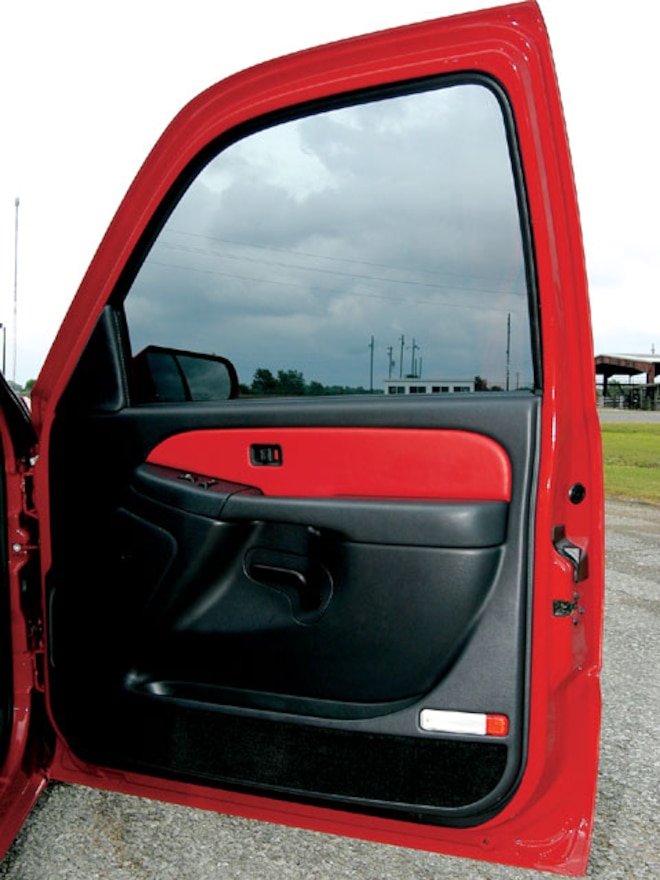 View Photo Gallery | 12 Photos
Photo 6/12   |   2000 Gmc Sierra inside Door Panel
Before the truck was shipped off to the paint booth, some custom body mods were in order. Up front, things were kept simple with the addition of a Stull Billet insert in the chrome grille. Other simple add-ons included Street Scene mirrors, a cowl-induction hood, and a Sir Michaels steel roll pan for the rear. Barker Custom and Collision in Tuscaloosa, Alabama, was the source for more serious mods, such as shaving the taillights, stake pockets, and the tailgate handle and also molding in the steel roll pan. Kevin Williams was credited with laying down the Victory Red paint on the truck along with the trick flame job.
The flamed theme continues on the inside as well, starting with black ultra-leather flamed seats and flamed Trenz billet pedals. Kenny Long of Long's Glass and Upholstery in Vernon, Alabama, did the flame job on the seats and also fabricated the custom center console. The flamed console is decked out in black and red ultra-leather and houses AirLift Easy Street Air Gauges. Another flamed touch is the Colorado Customs billet steering wheel. The dash was also smoothed and painted for a true custom appearance, while red-leather door inserts complement the dash. The finishing touch is a complete JVC sound system.
As a daily driver, Jason kept the original 5.3L engine fairly stock with the exception of painted Escalade motor covers and the addition of a Mac Products air intake. With the motto "do it right the first time" and a hankerin' for flames, Jason has created a cool custom that even his father would be proud of.

- OF
By Kevin Wilson
42 Articles