Because Size Does Matter 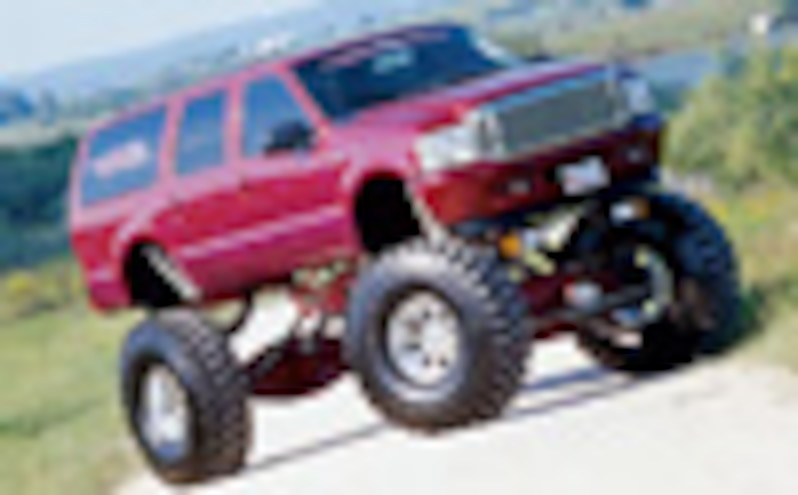 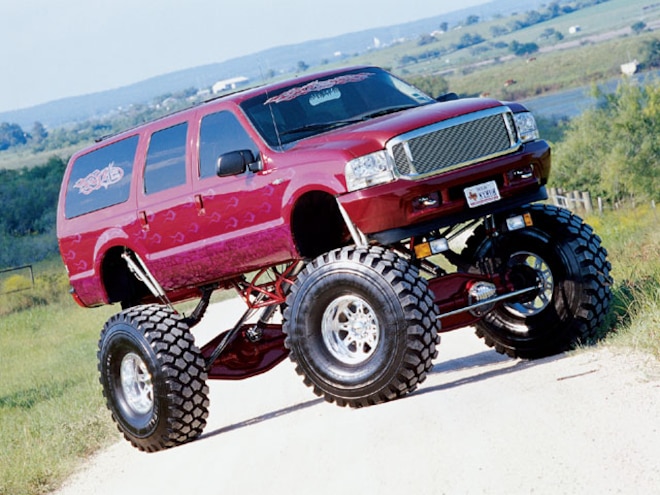 View Photo Gallery | 2 Photos
Photo 2/2   |   2000 Ford Excursion 53 Inch Tires
When you pick a name for your business, you want to make sure it represents who you are and what your company can achieve. When you look at Joey Gonzalez's shop, Maximum Altitude Offroad, it's clear as day what he represents. Joey has been providing the San Antonio, Texas, area with everything from mild lifts to extreme custom big-inch lifts for the past 10 years. His current flagship, an '00 Ford Excursion, was picked up from a friend because it was already at maximum size and Joey wanted to make it bigger and better.
The boys at the shop began by removing the stock suspension components. The differentials, stuffed with 5:13 gears, were plated, reinforced, as well as gusseted, and a custom four-link was added to keep axle wrap to a minimum. A subframe was fabricated, and hangers with 15-inch leaf packs and blocks were added in the rear; up front 30-inch leaf packs were used. Shock hoops were bent up for all four corners, and Doetsch remote reservoir shocks were bolted in place. After a few measurements were made, Drive Shafts Unlimited, also in San Antonio, cut up a set of 'shafts for the beast. To complete the lift, a set of 52.9-inch Michelin XZL tires was mounted to 20-inch Weld Cheyenne wheels and added to the truck.
Once the truck was driveable, it was taken around the corner to Oscars Custom Upholstery. There, the headliner, door panels, center console, and seats were treated to a full leather flame job. Joey then installed some billet to brighten up the interior. Trenz billet doorsills, a rearview mirror, and pedals were added along with a flamed gauge cover.
Brandit Franco, the Maximum Altitude in-house stereo guru, was then unleashed on the Excursion. A Pioneer DVD head unit was used up front and Pioneer 5x7-inch speakers were installed throughout the cab. Four 12-inch MTX pro-series subs were installed in a custom-built fiberglass box and powered by dual Memphis Audio amps for serious bumps.
The final stage in building the Maximum Truck was spraying some new paint on the shell and adding some graphics to the lower half. James Benavides of Krazy Kustoms Paint and Body, located in San Antonio, took the reins. House of Kolor's Torrador Red was used to coat the shell of the truck, and then flame licks and skull graphics were added using House of Kolor's Raspberry Pearl.
Joey's ability to think big coupled with a great group of mechanics such as Casey Cockran, Gabe Montez, Brett Bell, and Hank Sommers are the reasons that Maximum Altitude has been pumping out massive amounts of show-quality trucks over the last decade and will continue to do so in the future.