This '98 Diesel Chevy Is Full of Changes 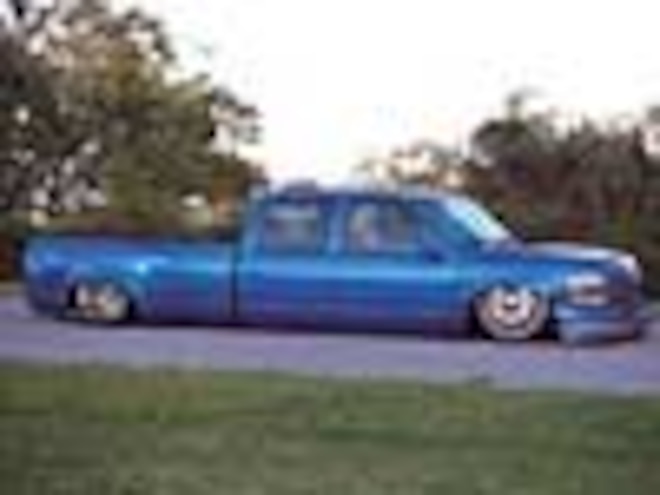 There is a saying that goes, change is good. This cliche would explain the changes behind Kerry Cunningham's '98 diesel-powered, Chevy dualie. After being featured on the pages of Truckin's June '02 issue as a colorful two-tone rocker-draggin' Crew Cab dualie with an Escalade front end, it underwent a complete identity transformation. Cunningham is a member of the prestigious club Negative Camber, where the membership fleet of road graders and draggers pride themselves on living the low life. The complete makeover took only six months to complete.
Starting with the dualie's foundation, the frame and suspension were dropped a total of 14 inches from stock-ride height. To achieve this, the front suspension received a pair of Belltech 3-inch drop spindles, and the factory lower control arms were refabricated to accept the larger 22-inch wheels and tires. Custom-bent tubing supports were also fabricated to accommodate the Firestone 26C airbags. In addition, the rear framerails were step-notched to allow for increased negative ride height and suspension travel of the rear axle housing. Tucking 22s, the Alcoa polished-aluminum wheels were wrapped by P265/35R22 Pirelli Scorpion rubber that retracts up inside the wheelwells when the Firestone 26C 'bags are deflated. Monroe shock absorbers control and dampen the suspension frequency, contributing to better ride quality.
With these mods in place, the rockers still weren't leaving an impression in the ground. So, the Sawzall was broken out to assist in a 3-1/2-inch body drop (channeled, for the old-school readers), allowing the six-wheeler to drag the rockers, bedside panels, roll pan, and front bumper.
Lifting the hood exposed the factory 6.5L turbodiesel that was yanked, then steam cleaned and coated with body-color-matching Corvette Blue Sherwin-Williams paint. A pair of electric fans kept the rotating power mass cool, while two Optima Red Top batteries allow for ample cold-cranking amps. The 4-inch Flowmaster exhaust system purges the diesel exhaust at 12-16 pounds of boost produced by the turbo. A B&M Shift Improver Kit was also installed, creating much firmer shift points. The factory computer has been reprogrammed to allow for a respectable 18.17-second, 92-mph quarter-mile pass.
The body mods were performed by Cunningham, Tyler Scott, and Travis Chauvin, and included a completely shaved and smoothed door, tailgate handles, gas door and roof seams. The previous '00-'01 Cadillac Escalade front sheetmetal was scraped, and a pair of sectioned '98 Chevrolet front fenders were teamed up with an '01 HD grille and grille shell, flanked by a pair of '01 HD headlights. An '01 HD factory hood, radiator core support, and an '01 HD front bumper finished off the leading edge. The rear tailgate was shaved and smoothed with a Sir Michaels roll pan and '92 Caddy taillights. The rear dualie fenders were extended 2 inches to accept the larger 22-inch wheel and tire combo. The previous ragtop opening was eliminated by skinning the top and installing an all-new roof skin. After everything was complete, Cunningham's six-wheeler was rolled into the paint spraybooth, where it underwent a color change. The present color is a rich Moody Blue Sherwin-Williams Corvette Metallic.
Mounted into the factory dash is an Eclipse 7000D video head unit pulsating audio tunes to three Alpine V12 amplifiers and three W6 JL Audio subwoofers mounted in a custom box behind the back bench seat. The Kicker separates and mids were grafted into all four doors. Cunningham labored and displayed his interior talents with the remaining interior factory plastic pieces of the dash, door panels, A-pillars, and moldings. He removed the pieces, sanded them smooth, and painted their exterior Moody Blue Sherman-Williams Corvette Metallic. He also installed a factory black carpet kit and vinyl headliner, then mounted a pair of racing bucket seats up front. A Colorado Customs Denver steering wheel caps the factory tilt-steering column.
A project like this always encounters a lot of help and understanding from friends and loved ones. Kerry would like to thank his mom, dad, brothers, Travis Chauvin, Kevin Holland, Marc Breaux, Clint Roger, Scooby Greedy, Frank at Rod's, Kevin at Dent Works, Da' Shop, the crew at Trapp Chevrolet, and his girlfriend Stacie. We are sure the list goes on, but editorial feature space is limited.
Supposedly, cats have nine lives. How many lives does a '98 Chevy dualie have? According to Kerry Cunningham, it's two. But could there be a third?