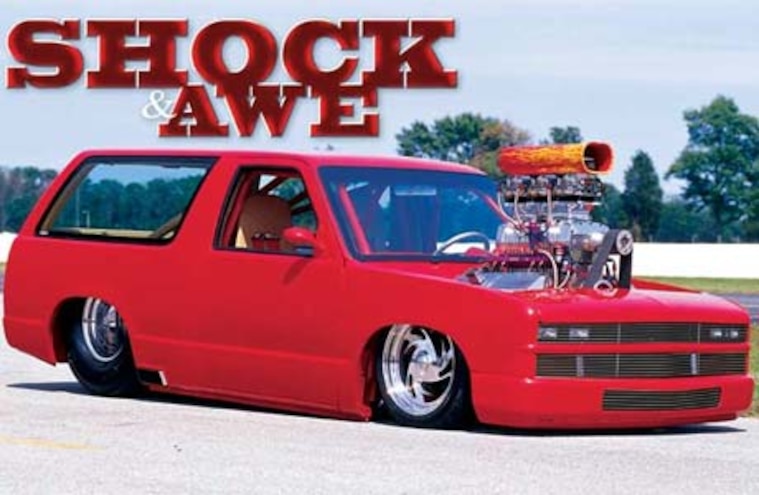 When the number one reason why people say they build their trucks is "to be different." Carl Peters isn't much different when it comes to his reason for one of the most radical Pro Street rides we have ever laid eyes on. The difference in this buildup, however, is the fact that this '84 Chevy S-10 Blazer is unlike anything else, and it encompasses a wide variety of custom aspects from mini-trucks, hot rods, and classics, to full-blown race cars.
Carl and his brother David are the co-creators of this beautiful machine and have spent the last seven years building, designing, cutting, welding, painting, and doing all the other tedious chores that go into the full buildup of such a badass truck. The pair started off with the idea of stuffing a big-block into the Blazer. With this idea came all the realities of exactly what would need to be done for this Blazer to handle the amount of power they wanted to unleash. The Blazer was torn down to the frame to begin the process.
Carl wanted his truck as low as possible, so the Blazer received a 3-inch body drop, and the front of the frame was sectioned, moved up and gusseted, then rewelded to allow the suspension and the frame to clear the engine, as well as sit flat on the ground. The rear of the frame was then chopped off and a new tubular rear clip was built to house the air ride's essentials, including the fuel cell. The front received Belltech drop spindles to allow the truck to lay out when the air is depleted from the Air Ride Technologies air springs. The rear suspension uses a ladder bar setup to keep the Dana 60 rearend in track. Once the frame was to the brothers' liking, it was time to tackle the motor.
A 540-cid V-8 big-block is the heart and soul of this Pro Street Blazer. Boasting more than 1,000 hp, the engine, with the blower, carburetors, and air cleaner, sits higher than the roof. After the motor was completely assembled and mocked up to the frame, Carl figured it might be best to have a professional deal with the headers and exhaust. After an extensive wait and many excuses from the header shop, however, Carl and David decided to build the parts themselves.
After just eight hours, the headers were built and installed. After the engine and truck was wired, it was time to give the nose a face-lift. Having already built a fullsize Chevy, Carl decided that was the front end look he would stick with. The two men cut the Blazer fenders to fit the fullsize billet grille. A fullsize hood was cut to fit, along with a fullsize bumper. Carl also wanted a smooth exterior and hot-rod-style look, so the Blazer was soon missing the body line, roof ribs, handles, and taillights, while some flush-mounted LEDs were molded into the roll pan.
After the fullsize front end was smoothly crafted to the Blazer and the body was rid of all the factory annoyances, the next order of business was the interior. It was obvious that a rollcage would be built, but once again the Peters bothers weren't about to build the usual. The Blazer's full interior sports bent tubing throughout that is so impressive, the truck could roll 1,000 times and everything but the body would probably survive.
A custom-built center console was also incorporated to house the shifter and gauges. The dash, door panels, and center console were smoothed, painted, and upholstered to match. The Blazer wears custom-mixed Dupont Red that flows from the custom-built engine bay to the handbuilt rollcage and everything in between. The whole package was finished off with the addition of Colorado Custom Wildhorse one-off wheels. Carl wanted that super-drag look and feel, so he had a set of 17x5-inch wheels wrapped with 170/60R17 Dunlop motorcycle tires put up front, while super-wide 15x15-inch Wildhorse billets wrapped with 21.50x33R15 Mickey Thompson Pro Street rubber carry the rear. The amount of work and detail that went into this seven-year buildup can't be accurately described in words, so we hope these pictures help portray the Peters brothers incredible ground-up project.
the lowdown
Wheels/Tires
Front set of one-off Colorado Custom's Wildhorse 17x5-inch billet wheels wrapped in 170/60R17 Dunlop motorcycle tires / rear set of Wildhorse one-off, super-wide 15x15-inch billet wheels wrapped with Mickey Thompson 21.50x33R15 Pro Street rubber
Suspension/Chassis
Belltech drop spindles / 'bagged all the way around using Air Ride Technologies air springs / new front crossmember / handbuilt rear frame and tubular arms / rear suspension uses a ladder bar setup
Body Modifications/Paint
Body-dropped 3 inches / '90 Chevy fullsize billet grille / '90 Chevy fullsize front bumper cut and rolled to fit / cut and reshaped front fenders to fit the fullsize front end / cut and used Chevy fullsize hood / firewall moved back 4 inches / handbuilt inner fender and radiator supports / shaved third brake light, body line, roof ribs, taillights, tailgate handle, license plate, and door handles / license plate motorized to fold out from under roll pan / LED taillights molded into roll pan / molded custom exhaust tip exits in front of rear wheel / custom-mixed Dupont Red paint
Interior
1- and 1-5/8-inch tubing rollcage runs throughout the interior / handbuilt center console houses shifter and gauges / reworked dash, door panels, and gauge cluster; painted and upholstered to match / Kirkey Racing seats / five-point RJS seatbelts
Engine/Performance
540-cid big-block V-8 / machined by Speed-O-Motive / Merlin heads / 4.5-inch pistons / Competition Cams high-performance camshaft / narrowed Dana 60 rearend / relocated Odyssey battery behind passenger seat, sunk in the floor / MSD electronic ignition / handmade 3-inch exhaust / handmade headers / 1,000-plus hp
Special Thanks
Carl's brother David / Carl's wife for all he put her through