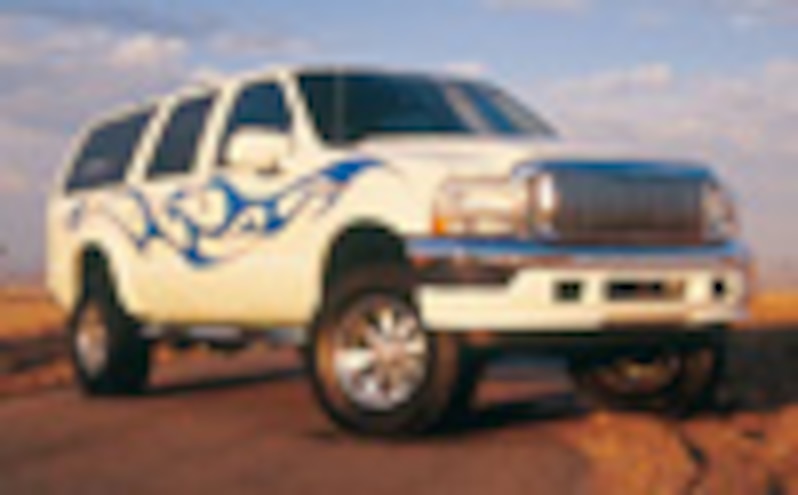 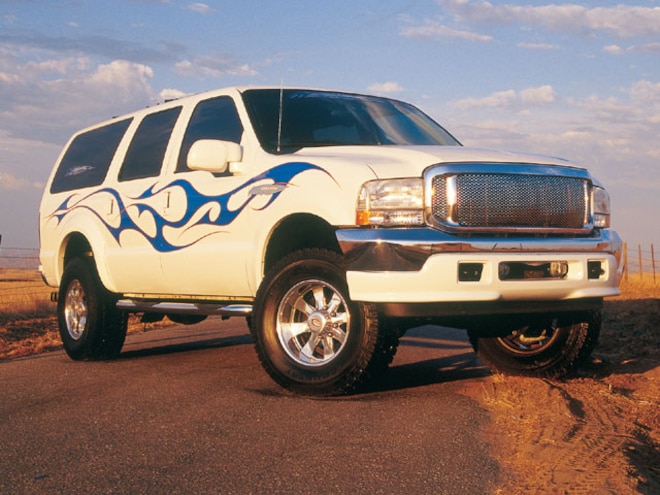 View Photo Gallery | 2 Photos
Photo 2/2   |   2001 Ford Excursion fabtech Lift Kit
When it comes to behemoth trucks, power is the key to getting their carcasses motivated. It has been said, "There's no replacement for displacement" when it comes to making big power. For most people, the idea of swapping the engine in a new vehicle is completely out of the question; yet there is a way to make your engine think it's bigger than it really is. How? Forced induction, that's how.
The engine is an air pump - the more air it pumps, the more power it makes. At sea level, the weight of the air from the top of the ozone to the top of your head weighs about 14.7 pounds; this is known as atmospheric pressure. When one of your engine's cylinders moves down and takes a breath, it has more than just the force exerted by the piston moving down. It has atmospheric pressure pushing air into the cylinder as well.
The amount of air moved by the cylinder in a revolution, with the proper amount of gas, is directly related to the amount of power the engine can make. A blower, supercharger, or turbocharger is just another air pump. The pump is designed to create pressure on the intake side of the engine so that the engine moves more air with each stroke. The increase in airflow is again related to the amount of air the engine can move. The added pressure in the cylinder allows it to move more air, which makes more power.
Whipple Superchargers is in the business of building superchargers solely for the combustion engine, but Whipple didn't stop there with this '01 Ford Excursion. Getting this carcass up to speed is made easy with the custom one-off intercooler V-10. Exhaling through a set of JBA headers and Borla's Cat-Back exhaust, the big breather puts out an estimated 504 hp at 4,700 rpm, and 680 lb-ft of torque at 2,800 rpm.
Getting a rig this big to stop is done by way of Stillen's six-piston AP Racing brake system. The ventilated disks are larger in diameter, giving the brakes a leveraged advantage compared with the stock units. The six-piston calipers have more contact patch-surface area for added stopping power. The result is the ability to stop the flamed Orca in a reasonable distance.
The killer whale sits on a set of Boyd 18x10-inch Hot Rod 8 rims, and Toyo 325/65R18 Open Country hides cover the alloy rims. Some additional clearance was needed for the large-diameter rolling stock, so a Fabtech 6-inch lift was adapted to the big Ford's suspension to achieve the proper ride height.
Bryen of Bryen Dunn-it Custom Paint tapped and sprayed the heavy carcass, leaving a layer of Blue Dupont tribal flames stretched across this hulk. PPC Custom installed a Street Scene front grille and air dam to round out the exterior. On the inside, a suede headliner sets off the white carpet quite nicely. The APC gauge cover gives the cluster a custom look, while flamed alloy pedal covers accent the foot controls. Carbon-fiber inserts were added in the door panels, dash, and center console. Additional aluminum highlights the interior, including the door seal steps, the door panels, the headrest-mounted monitor bezels, the speaker covers, and the polished amps.
Reproducing the cries of an orca through miles of dense water can be tough, so Audiobahn's A-2200HCX 1,200-watt and A-235HCX 280-watt amps were used to move the large speaker surface area. These amps are mounted under Plexiglas with all the other caps and crossovers. Audiobahn was also the driver of choice for the whale's audio emission. Three 12-inch subs are enclosed in a tuned box, four sets of 6-inch mids and mid-bass couplers are installed in the doors, and four sets of tweeters balance out the sound spectrum for an even sound wall.
Heading up the visual department are two Sony monitors mounted in the headrests of the front seats, as well as a cockpit-mounted monitor for entertainment. The Sony XAV-7W head unit acts as the liaison between the CD/DVD information and the amplifiers. A whopping 1,440 watts is just what this killer whale needs to keep the other mammals informed of the haps. Free Willy! (In memory of Keiko the killer whale).