When You Need to Pull Some Stumps 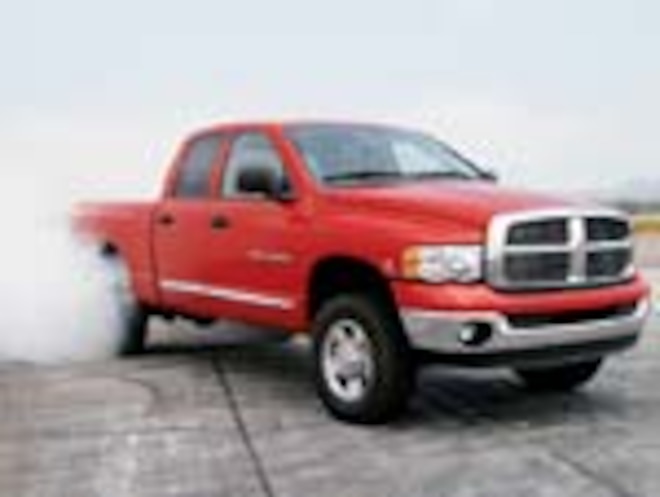 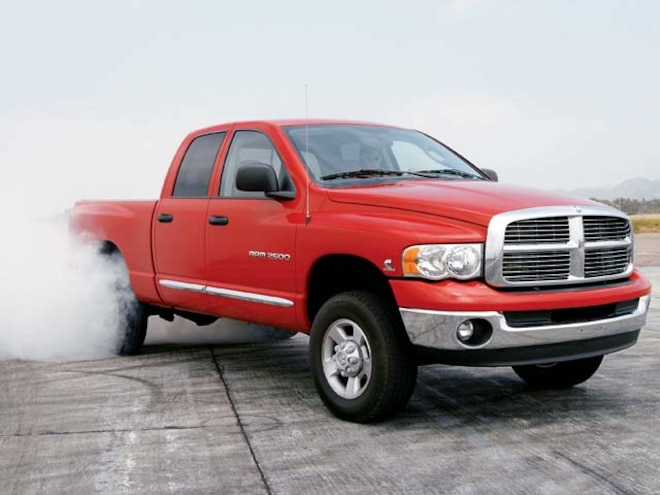 View Photo Gallery | 9 Photos
Photo 2/9   |   2004 Dodge Ram 2500 front Left View
Dodge has been hot on the heels of Ford and Chevy ever since its redesigned Ram hit the market with the much-hyped Hemi V-8. Dodge is showing just how determined it is to take over the truck world by introducing desirable niche products, such as the Ram SRT-10 and Power Wagon, and strongly competitive mainstream products, such as the class-leading 5.9L Cummins 600 I-6 diesel engine.
Our flame-red Ram 2500 tester was dropped off at the office, complete with the $5,460 Cummins 600 checked off on the order box, along with the luxurious Laramie package that included comfortable, heated leather seats and upgraded everything. Similarly equipped as the competition, the Ram came in at $44,245 - the lowest of the test. The Ram was a pleasant place to do business, and all of the testers commented on how maneuverable the Ram was around town. While the Ram had a firm ride, it was also one of the smoothest, no doubt helped by the front coil springs on top of the solid axle. The quick steering made the Ram feel relatively nimble and lightweight, and unlike the GMC, the best thing about the Ram is when you step up into it, it feels like a proper truck.
At the track, the Ram's lighter weight and 325 hp enabled it to show its tailgate to the other trucks with a blazing 0-60 time of 8.85 seconds and a quarter-mile run of 16.8 at 80.58 mph. The Dodge's brakes, which were by far class-leading around town in feel and stopping power, also turned in the best 60-0 braking distance of 138.6 feet - only 6 feet longer than the recently tested '04 Dodge Ram SRT-10, and a whopping 16 feet shorter than the GMC Sierra HD. The 30-0 braking distance with the trailer was also tops.
With the trailer in tow, the quicker steering that the testers liked around town promptly became a disadvantage, causing busy steering and making over-corrections all too easy. The Dodge Ram was also the only truck of the test to come without the optional trailer-towing mirrors, which are only a $100 check box on the order form. Pulling the grade, the Cummins felt strong but had a dead spot in the powerband, which limited the Dodge to the same top speed as the GMC's 75 mph. The Cummins also doesn't feel as free-revving as the Duramax or Power Stroke, but the transmission uses what it has to pull off exceptional shifts and held the Dodge to 60 mph on a four-mile stretch of a 60 percent grade. The Dodge's chassis also felt more susceptible to trailer sway, and while it can easily tow the load, when driven back-to-back between the other trucks, it doesn't feel the most stable. In this test, the lack of big mirrors and trailering dynamics contributed to the Ram being the less desirable tow vehicle of the bunch. 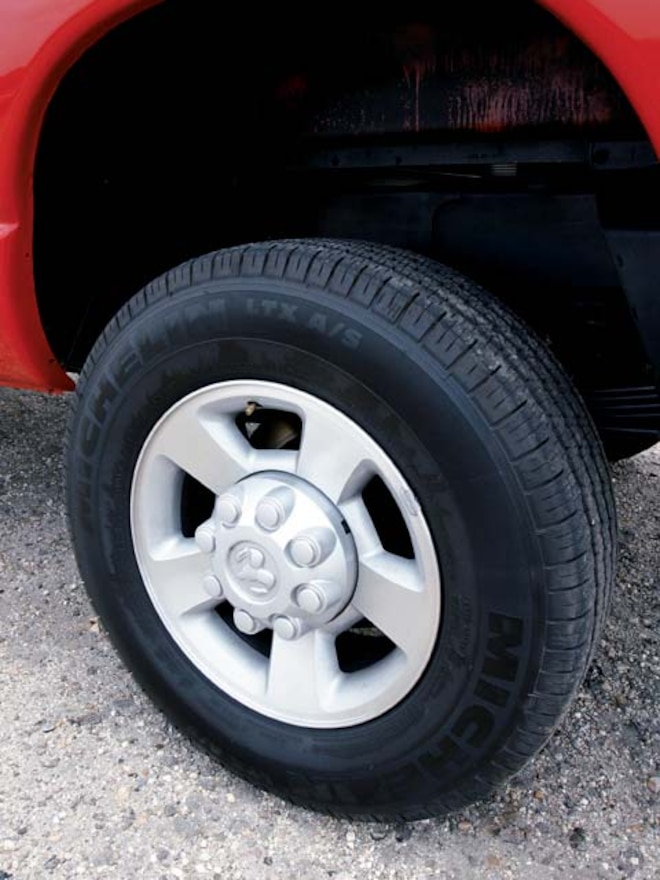 View Photo Gallery | 9 Photos
Photo 3/9   |   2004 Dodge Ram 2500 wheel View
Overall, the Dodge is a strong performer; only its shallow bed and quick steering keep it from being the best hauler in the group. We noted the awesome brakes, clean ergonomics, and quality fit and finish. We would recommend the Dodge to anyone who has the need for heavy-duty truck, but might see more commuting in it than towing. But if you are going to tow, enjoy the Cummins and plunk down the extra hundred bucks for the mirrors.
From the Logbook:

What other six-cylinder sounds so tough?
- Dan Ward, Associate Editor

There isn't much to complain about on the Dodge, but why don't the steering wheel controls light up?
- Sean P. Holman, Associate Editor