I've Fallen and I Can't Get Up 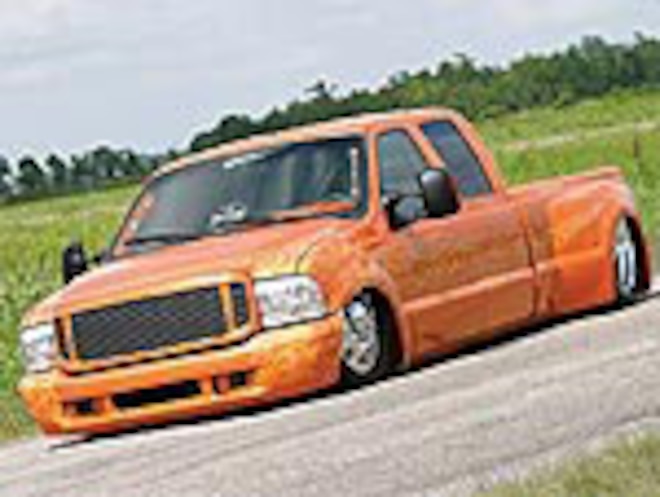 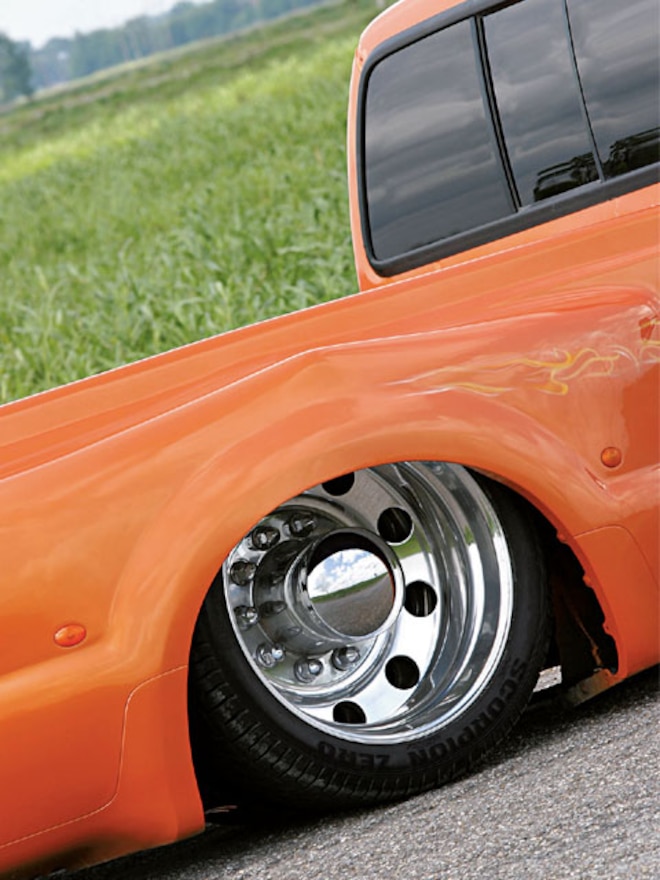 View Photo Gallery | 13 Photos
Photo 2/13   |   1999 Ford F350 custom Wheel
There are some things in life you just can't control. When these things go unintentionally wrong, they're labeled accidents. By definition, you'll find it's simply the way things happen without any planning, apparent cause, or deliberate intent. Basically, it is the act of an unplanned and unfortunate event that results in damage, injury, or upset of some kind. We'd all like to point the finger when things go awry: It keeps the attention of our own failures away from ourselves, and provides a direction for anger. When misfortune comes, it can come in many different flavors. Just ask Clyde at Silver Star Customs in Horn Lake, Mississippi, about his experience with a certain '99 Ford F-350.
It all started when Clyde purchased the F-350 to build a promotional tow vehicle for his shop. His intention was to be the first heavy hauler draggin' body panels over 22s. Four weeks after the purchase of the truck, the engine just quit working. For one year, the truck was hauled from shop to shop with a mystery problem no tech could seem to figure out. Numerous parts were thrown at the heavy hauler, including a complete engine with fuel system. Four Ford dealerships in the area couldn't even find the problem. Finally, the fuel system was cleaned and a new Engine Control Module was installed, and the truck came back to life. Clyde says he isn't sure if that was the problem or not. After replacing $13,000 worth of parts, there weren't many things left that hadn't already been changed. It could have been any combination of parts that made the truck run again.
Unfortunately, the new ECM was for a pickup with a standard transmission, and its programming destroyed the automatic tranny behind the 7.3L diesel powerplant. This was discovered after tearing up two transmissions in the big rig. The truck was put back on a lift to have a third trans put in it, with the correct ECM. The problem was that this new transmission had a bulge on the rear of the trans that none of the other transmissions had. Of course, this bulge didn't clear the floor pan of the body-dropped F-350. The tech working on Clyde's truck had no clue about the tranny hump and body-clearance issue. Hell, he just pulled out a tranny that fit just fine. Leave it to Ford to keep you guessing with components manufactured to do the same job with different dimensions. The tech proceeded to jack up the new transmission with a tranny jack, not realizing the truck began to come off the lift. The lift was a center cylinder lift, and the weight on the truck rotated the center lift cylinder until the frame was no longer under the lift pads. The heavy hauler gained momentum as the balance shifted, and the truck fell off the rack. It landed on a 55-gallon drum, crushing the top of the cab and left-side fenders. 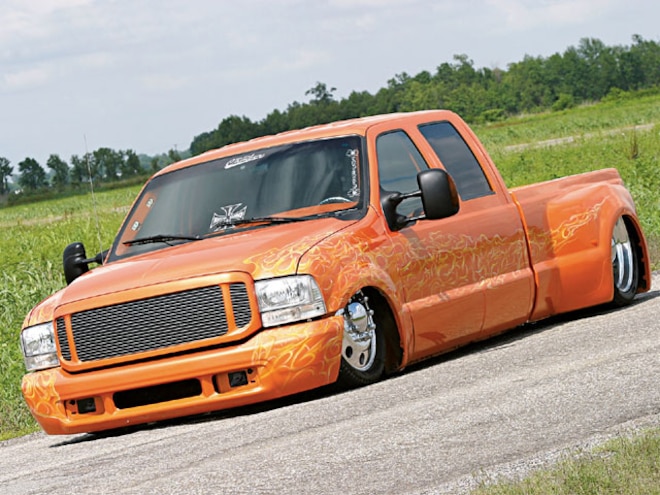 View Photo Gallery | 13 Photos
Photo 3/13   |   1999 Ford F350 front View
Before its demise, a lot of work was put into the heavy hauler in the time Clyde owned it. The truck was body-dropped, but still retained the stock floor pan. The front frame section of the F-350 was cut off and a Chevy six-lug 1/2-ton clip was adapted to the big Ford; this was done because there is a larger variety of rims for the six-lug wheel pattern. Out back, the springs were removed and a heavy offset rim was used to push the track in. A killer spider-skeleton-style frame was welded in and 'bags and links dial-in the rear suspension. The heavy hauler was equipped with the 'bags on all four corners and 1/2-inch air line was ran from them to the Silver Star air valves. Dual nitrogen tanks mounted in the bed with iron cross-styled brackets supplies the valves with all the pressure and volume needed to get the heavy hauler "hopping." Even though Clyde had put many painstaking hours into customizing the Ford, he was elated that the insurance company was just going to cut him a check for the damage. He saw this as the golden opportunity to get rid of a headache.
Two brothers, Mike and Kevin Hyde of Memphis, Tennessee, decided to buy the truck from Clyde for a good price. They saw no reason to put the truck to rest just because it had a rough beginning. Plus, they were just going to finish customizing the truck anyway. They thought about cutting off the roof and making a Calaway-style rig, but that wasn't going to make for a very functional hauler in the wet. So they decided to set the truck on 24s and fix the body. A trip to 4 One Autosports in Memphis got the truck headed back into shape. The techs at 4 One cut off the collapsed portions of the cab at the seam lines and fitted new body pieces to the heavy hauler's cab. While they were in deep with bodywork, they shaved the truck of its molding and badge holes, handles, tailgate and taillights, and custom-molded the modified dualie's rear fenders. The fiberglass rear fenders received new bulges to fit 24-inch rims under the big hulk. 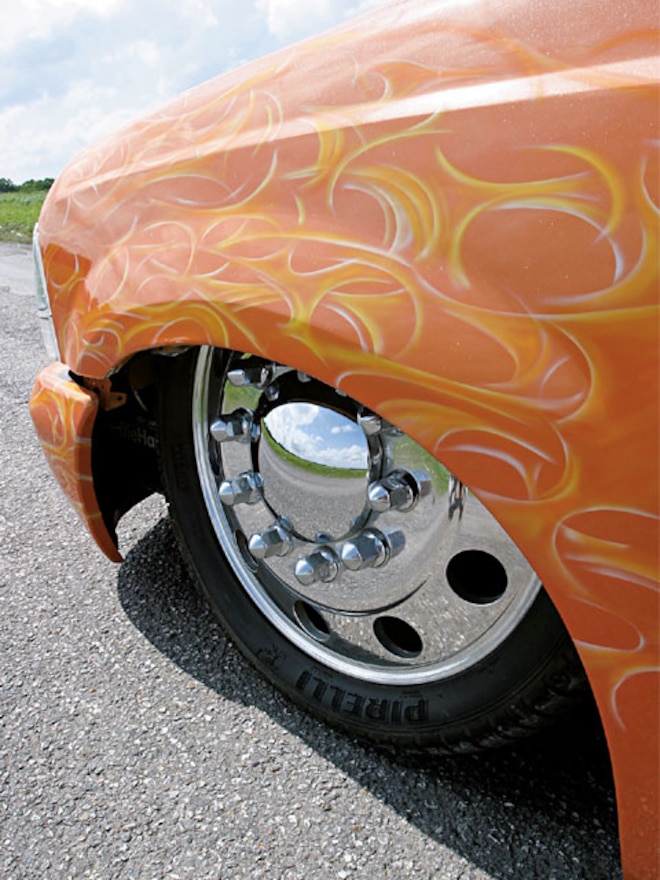 View Photo Gallery | 13 Photos
Photo 4/13   |   1999 Ford F350 custom Detail
With the suspension and bodywork done, it was time to smooth the interior and spray pigment on the heavy hauler's carcass. Kutin Edge Kustoms took the already-ripped-out interior panels and smoothed them with some filler and sandpaper. Every plastic panel was sanded smooth and shot with Sherman Williams Spiez Orange. While Jay Cee had the gun in hand, he also laid down the orange base color over the Blue Oval. Yellow, orange, and white "real flame" graphics were airbrushed over the basecoat. With all the flames laid down, a few layers of clearcoat brought out the wet look over the freshly shot pigments. All the interior plastics where reattached to the vehicle's fuselage. Katzkin leather covers the dualie's seats. A B.A.D. steering wheel tops off the interior styling, and is the only accent of aluminum in the interior, complementing the external style decisions. Outside, 24-inch alloys were tailored to the 6-lug pattern with large 10-lug wheel adapters. A set of 295/40R24 Pirelli meats covers the alloy rims.
Sound Waves of Memphis installed the entertainment in the dualie, including a CD/DVD Pioneer head unit that supplies the front headrests' video signal to run the Clarion 6.4-inch monitors mounted in them; 5.25-inch speakers fill the four doors made by Image Dynamics. A set of subs by the same speaker manufacturer is inclosed in a sub box behind the rear seats. Powering the array is a 750-watt Zapco amplifier.
From wreck to ride was a long haul for the brothers. Kevin and Mike are proof positive that will can conquer almost anything. Even if you can't control all things, you can be persistent with success. All in all, the truck is a sweet ride now. Good job, Kevin and Mike.