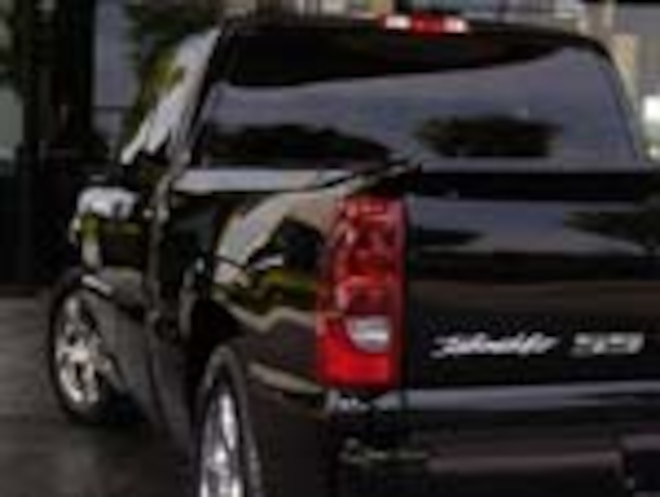 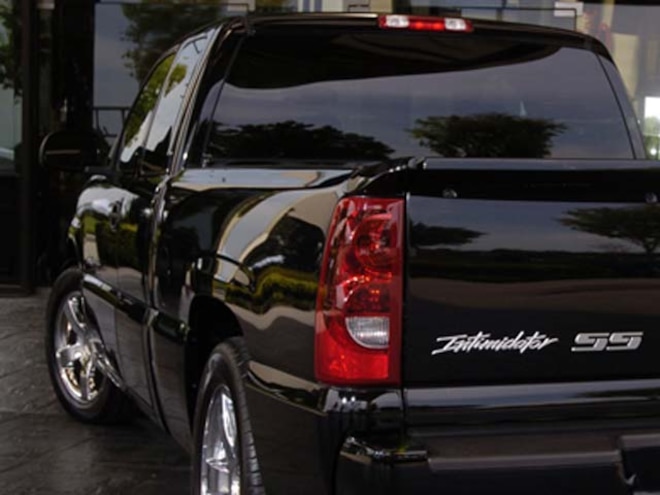 View Photo Gallery | 17 Photos
Photo 2/17   |   2006 Chevrolet Silverado Intimidator SS Rear Driver Side View
What has 345 horspower, 380 lb.-ft. or torque, all-black paint, "Intimidator" badges and will spin the rear wheels? A Monte Carlo with a Nothrstar engine in the trunk? No. The 2006 Chevy Silverado Intimidator SS, that's what. Your buddies behind the bow tie will be making 1,333 special edition pickups to honor the late Dale Earnhardt, with a donation going to his foundation for every truck sold.
When compared to the "normal" Silverado SS, the Intimidator is more than just a badge package. It will include a lowered ride height, performance suspension, two-stage multi-leaf springs, Tenneco shocks, a stiffer front stabilizer bar and harder front jounce bumpers. It will also be rear wheel drive with a 3.73 locking rear differential. Unfortunately, this will not be unique to the Intimidator, a GM representative says that every model year 2006 Silverado SS will be twisting only the rear wheels.
The exterior will feature monochromatic black paint and "Intimidator" badges on the front doors and on the back of the truck. Chrome 20-inch wheels will be standard, along with a silver grille insert and a spoiler on the tailgate.
The interior boasts large Dale Earnhardt Legacy logos embroidered on the front headrests and the racer's signature on the tachometer. There is also an "Intimidator" badge on the instrument panel and floormats with the "Intimidator" script. The special edition truck will also include standard features found on every Silverado SS, including 4-speed auto transmission, cruise control, keyless entry, power front seats, radio controls on the steering wheel, power windows, engine oil cooler and transmission fluid cooler.
The Silverado Intimidator SS is the sixth "signature edition" vehicle to be offered by Chevrolet. It joins the 2002 Dale Earnhardt Signature Edition Monte Carlo (3,333 units), the 2003 Jeff Gordon Signature Edition Monte Carlo (2,424 units), the 2004 Monte Carlo Intimidator SS (4,000 units), the 2004 Dale Earnhardt Jr. Signature Series Supercharged SS Monte Carlo (2,883 units), and the 2005 Tony Stewart Signature Series Supercharged SS (1,020 units).