Darryl Lind Gets a Head Start With His '95 Chevy Fullsize 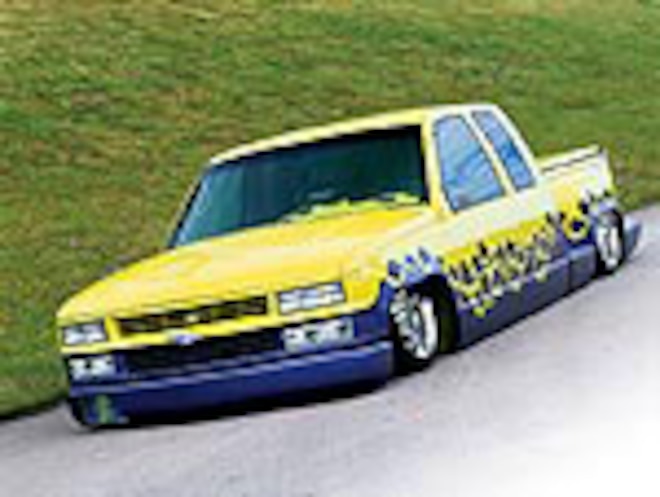 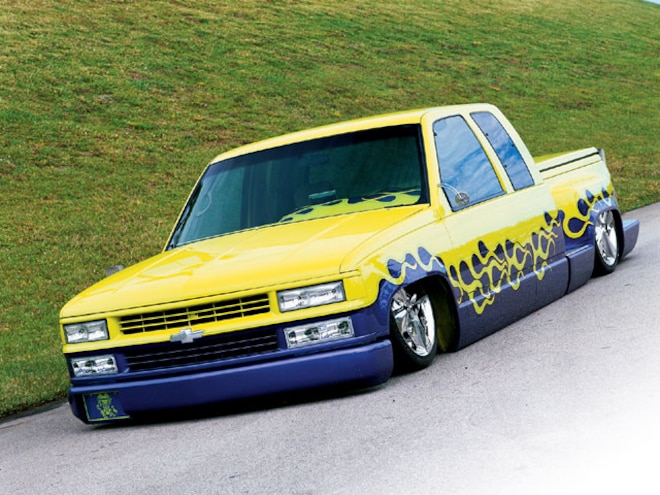 View Photo Gallery | 14 Photos
Photo 2/14   |   1995 Chevrolet Silverado front Drivers Side View
Custom-truck owners are often divided into two camps: Either you build your own or you buy one already built. The general rule is if you have more talent than money, you tackle the construction process yourself. You get the satisfaction of saying "I built it," and you know if something goes wrong, you are probably the best one to fix it. On the other hand, if you're short of time, talent, tools, or motivation, buying may be the best approach. The instant gratification of seeing something you like and driving it home that afternoon is hard to beat.
Darryl Lind, from Vero Beach, Florida, sees the value in both approaches. Darryl began his automotive involvement with motocross at an early age. When he transitioned to four wheels, he built a custom '98 Ford F-150, which was shaved, 'bagged, laying frame, and rolling on 20s. The truck was hot and he enjoyed competing at shows. But even with good-looking trucks, there comes a time when something new is always exciting. When Darryl began looking for a replacement for the F-150, the choice was to build another or buy one already complete. Scanning the local Auto Trader one day, he found the answer to his question. Since one of the requirements for his new truck was a body drop, discovering Tom Parrish's '95 Silverado up for sale made the decision easy. Parrish had been working on the truck almost four years and like Lind, was looking for a change. Lind drove from Vero Beach to see the truck at Parrish's home in Jacksonville, Florida. It was a case of love at first sight and the two quickly struck a deal. 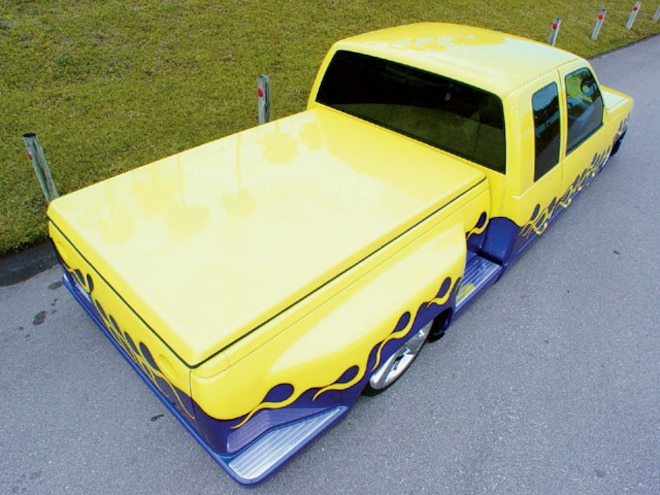 View Photo Gallery | 14 Photos
Photo 3/14   |   1995 Chevrolet Silverado top View
The dramatic look of the Chevy is due in large part to the huge 4-inch body drop that puts it in the weeds. Parrish modified the suspension by installing 2-inch dropped spindles from Belltech up front and used a custom four-link suspension in the rear. Four Firestone 2,600-pound bags were connected by 1/2-inch lines to a pair of compressors mounted to the frame. The twin reserve tanks in the bed store the power. At the touch of a button, the truck comes up to ride height and just as easily, slips back down for show. Ensuring the wheelwells are properly filled, the Stepside runs 20-inch Synergy rims from Lexani that are 8-1/2 inches wide and are wrapped in Nitto 245/35 ZR20 rubber. The inner fender panels were removed under the hood, ensuring that nothing would interfere on its way down. 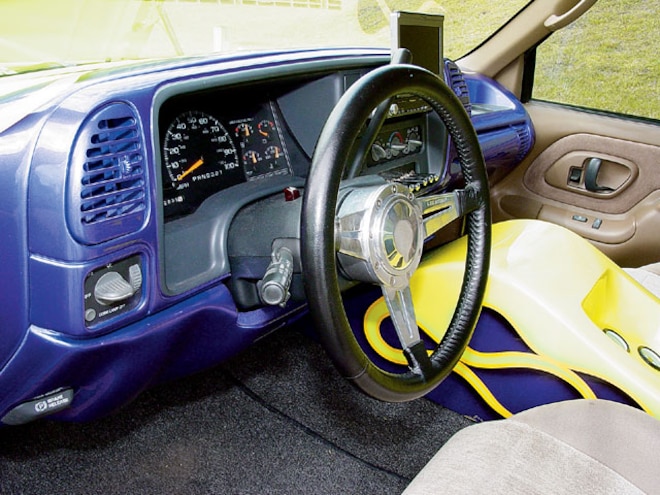 View Photo Gallery | 14 Photos
Photo 4/14   |   1995 Chevrolet Silverado custom Dashboard
Body modifications on the Chevy include smoothing just about every body panel. All unnecessary emblems were removed, along with the door handles and tailgate latch. The stock side mirrors were replaced with subtle billet versions. A custom Sir Michaels rear pan and offset license plate dressed up the rear, while the smooth 20th Century fiberglass tonneau cover dispenses with an external latch, using instead the factory automatic door lock mechanism inside the cab. Small '39 Ford taillights, mounted high in the tailgate, are a unique touch. Underneath, the frame is painted to match the Lime Green and Purple flamed exterior.
Motive power for the truck is a 350 V-8 equipped with a Super Chip, custom exhaust, and a single large 3-1/2-inch exhaust pipe exiting in front of the rear wheel on the passenger side. Darryl is looking for more horsepower and thinks a supercharger might be his first major addition. 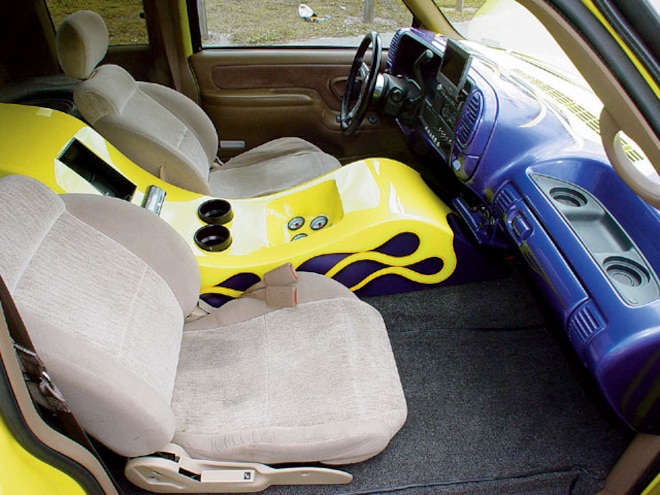 View Photo Gallery | 14 Photos
Photo 5/14   |   1995 Chevrolet Silverado custom Interior
Inside, the fiberglass dashboard has been painted to match. The Pioneer P6400 flip-face head unit controls the stereo system, with the head unit powering the front stage speakers mounted in the doors. Parrish created a full-length custom center console in between the seats that holds the Pioneer DVD player. Hidden from view, the JL Audio 500-1 amp powers the pair of Rockford Fosgate 12s, mounted in separate enclosures behind each bucket seat. The system fills the Extended Cab with both music and video.
Future plans are to keep the fabulous paintjob just the way it is and spend some time on the interior. Darryl plans to add Escalade seats and a few other personal touches. Whatever changes occur, however, Darryl is already sure of one thing: The best part about buying a truck that already incorporates most of what you want, means you're that much closer to driving the truck of your dreams.