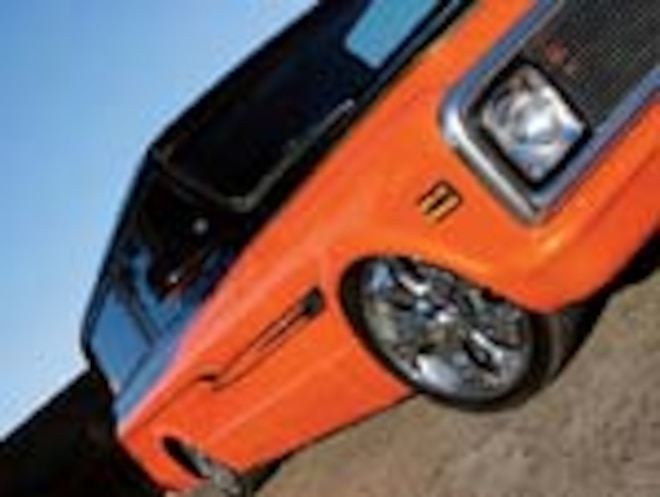 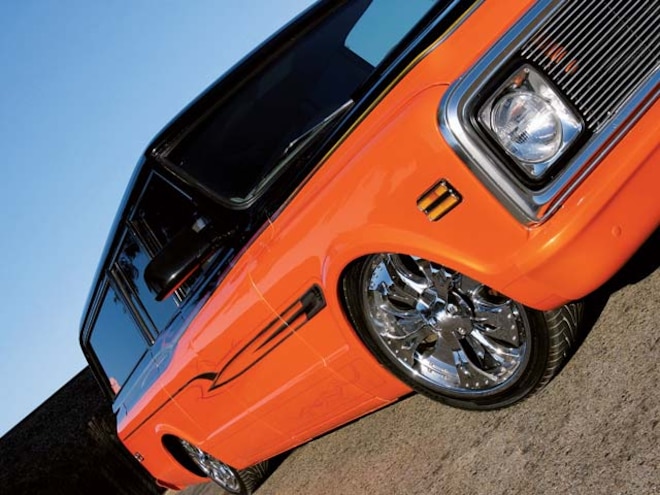 View Photo Gallery | 12 Photos
Photo 2/12   |   1969 Chevrolet Suburban front Side View
Back when Suburbans looked and drove more like trucks, they were intended to be used as workhorses, hauling materials and people to the job site. Back then, soccer moms weren't even part of the Suburban equation. Now, we see parents hauling and fetching the kids, not to mention the amount of times we have seen Suburbans being parked at some pristine country club or five-star restaurant. Many of today's late-model Suburbans are seen clad with all the bling-bling and bump-itty-bump available out there.
During the early '70s, custom trucks and SUVs weren't seen cruising or displayed at a show 'n' shine. To make up for this timeless void, John Monteiro built this wild '69 Suburban. They say "you're as young as you feel." If this is true, then John is a 70-year-old teenager. He has been building and cruising the boulevards for 50 years. John and his wife, Maria Cristina, have resided in Hanford, California, for almost three decades. John has been pulling on udders most of his life as a dairyman. My hat goes off to him; it's a hard living. I know: My uncle was a second-generation dairy farmer in Los Banos, California. John says, "If you've seen one udder, you've seen them all." When he's not milking a Guernsey, he's out cruising or parked under a shade tree at a show 'n' shine and taking home trophies as an active member of the 559 Kustomz club.
When a vehicle's construction is shared with other custom enthusiasts, it makes the journey that much more rewarding. Major players involved in this Burb's completion were Rafael Felix, John Banda, and John's nephew "Fish."
To bring the Burb down to its current ride height, John Banda, a member of 559 Kustomz in Selma, California, installed a pair of Western Chassis 2-inch drop spindles and Slam Specialties airbags up front, with Nitro shocks. To get greater stopping power, Banda installed a Western Chassis disc brake kit. Because '69 Suburbans came with a trailing arm rear suspension (no leaf springs), it made it simple to 'bag. To eliminate any rearend housing clearance issues, the framerails were C-notched. A pair of Nitro shocks damp the rear suspension when John is in roll mode. The pneumatic airbag system is activated by a Parker manifold and 4-1/2-inch valves, a Parker compressor, and a reserve pneumatic tank. A set of styling KMC Venom Spinner wheels wrapped in Kumho 245/40R20 rubber provide bling and grip to John's custom efforts.
Lifting the internal, orange-flamed, forward-tilt hood exposes a colorful engine compartment. The stock 350ci has a polished aluminum intake manifold with a Holley 750-cfm carburetor that's covered with a custom polished aluminum air-cleaning box. Exhaust gases flow into a pair of two-stage Flowmaster mufflers, creating that unique, throaty rumble.

View Photo Gallery | 12 Photos
Photo 9/12   |   1969 Chevrolet Suburban front Interior View
The interior received a gray leather and gray tweed makeover featuring a flame-embossed headliner and a center console with sliding top. The dash is covered in tweed, and its center section is raised in padded gray leather, displaying an embossed Chevy Bow Tie. A Sony head unit/CD player delivers audio vibes through four 6-inch JL Audio mids, powered by a 300W JL Audio amp. The boom comes from two 10-inch subwoofers--located in a custom enclosure--that are juiced by a 600W JL Audio amp. A Pioneer DVD player activates a 7-inch flip-down monitor mounted in the headliner. A pair of ball-milled, polished billet aluminum dash inserts, a gauge cluster and the glovebox, flank the center entertainment portion of the dash. White-face Auto Meter gauges maintain vital engine signs. A stylish APC leather-covered steering wheel directs the driver's lateral direction input.
This era's Suburban was given a square body shape that featured a concave body line, mid beltline, pancaked roof, raised hood, and a forward-racked rear D-pillar roof line with a grafted third brake light. To achieve a smooth appearance and two-tone colors, Rafael Felix at Custom Upholstery & Paint in Dinuba, California, performed some outstanding body mods: The door handles and gas filler were shaved, and a Lincoln gas filler door was grafted into the left rear quarter panel. A pair of vertical Cadillac taillights were frenched into the trailing edge of the rear quarter panels that flank the barn-door-style rear doors. With the body mods complete, the body was then primered and block-sanded until every ripple, crease, and wave was eliminated. The front and rear bumpers were narrowed to tuck-up to the fenders and were painted chromatic Tangelo. A polished billet grille was installed to the factory shell, and to achieve a cleaner appearance, front one piece windows were installed. Rafael laid down House of Kolor Tangelo Pearl, Black, and Candy Purple hues. He also displayed his airbrush talents by applying some newstalgic body trim with highlighted pinstriping and Bow Tie graphics.
When John cruises the boulevard, he does it in style and comfort. Rafael and his crew at Custom Upholstery & Paint are responsible for the immaculate interior that features gray tweed and leather. A massive gray, tweed-embossed flame covers the entire length of the Long Roof's headliner. The center of the dash and console are covered with gray leather, and the inlaid sliding console cover displays an embossed flame. Popping open the doors exposes the stylish door panels covered in gray tweed with leather armrests inserts. The custom-padded dash cap is covered in gray leather that highlights the dash's gray, tweed face. A pair of ball-milled billet aluminum dash insert panels highlight the white-faced Auto Meter gauges and glovebox. A pair of factory buckets were borrowed from a '94 Suburban and rebuilt with new foam before being reshaped and covered in gray tweed and gray leather. Rolled and pleated gray leather Bow Ties were inserted in the headrests. A stylish, APC gray leather-covered steering wheel caps the factory tilt column.
The audio system completes the total custom truck package. John had Rafael Felix build a subwoofer enclosure for the two 10-inch JL Audio boomers. The components and wiring were done by John's nephew Julian and his friend Mario. A Sony was the head CD unit of choice and get its amperage from two JL 300W amplifiers for the mids and highs, with a healthy 600 watts driving the subs. The four 6-inch mid/high speakers are located in the center console and quarter panels. For visual stimulation, a Pioneer DVD player with a 7-inch flip-down monitor is located in the ceiling. The multiple talents of Rafael Felix are present throughout the entire Suburban, whether it's the flawless paint scheme or a superior stitched interior. A youthful John Monteiro has been involved in custom cars and trucks for a half century, which goes to show that you're as young as you feel. And John's youthful spirit is carried over to his cool '69 Long Roof.