Wishing You Were Ken 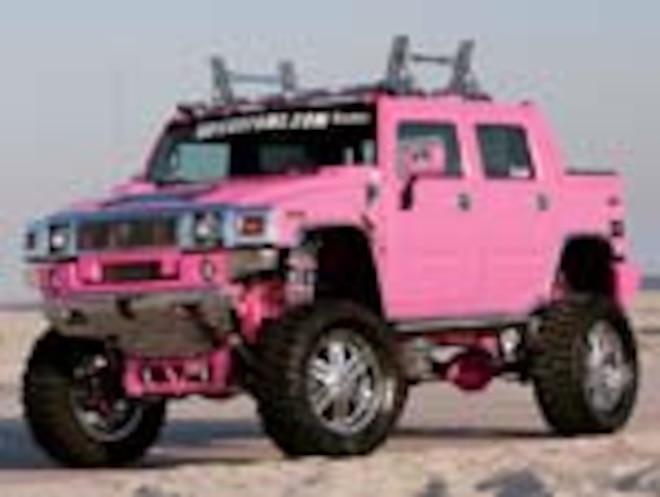 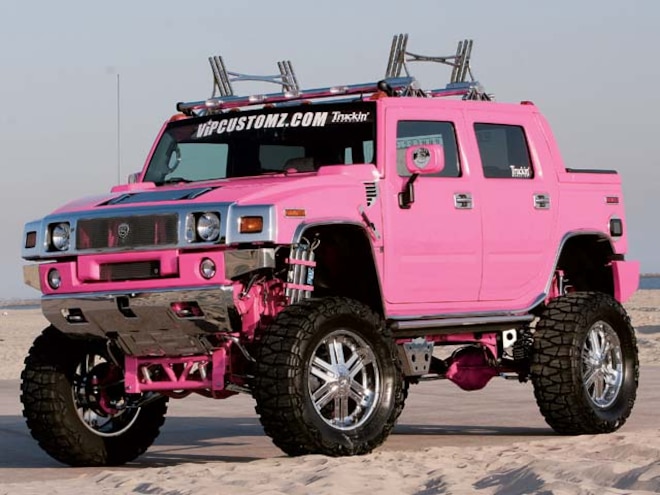 View Photo Gallery | 14 Photos
Photo 2/14   |   Click here for more pics!
Yes, we have lost our minds putting a pink Hummer SUT on the cover. We consider ourselves manly men who pound our chests during football games, who aren't scared to ride a mechanical bull, and who don't flinch at flesh wounds suffered during wrestling. However, we did get a little weak in the knees when the Pink Barbie Hummer pulled up and beautiful women flocked to the thing as if a Tiffany's diamond sale was going on. If women ruled the world, and Barbie was the queen, she'd arrive in style, exiting her pink and star-painted chariot. 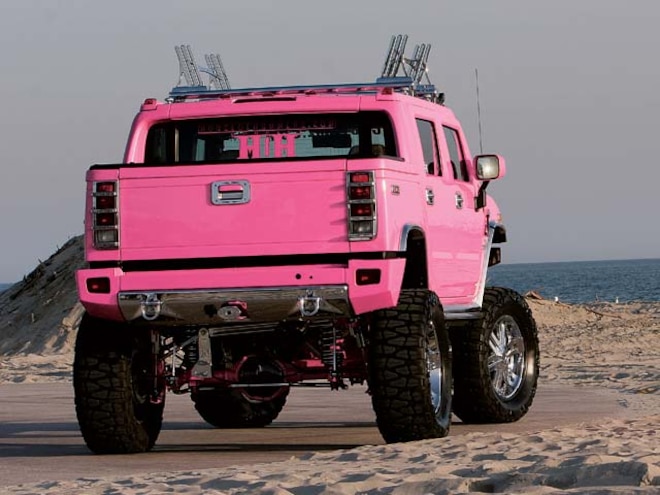 View Photo Gallery | 14 Photos
Photo 3/14   |   custom Pink Hummer H2 Sut rear View
Under all that bright PPG Pink Panther paint is a manly vehicle, we promise. Manny DeEncio knows manly, after all he has built some of the biggest, sickest, and most crowd-pleasing Hummers in the world. Featured in Truckin' twice before, his H2s have received plenty of exposure and garnered the attention of one interested businessman, this SUT's owner, Lundy Nath of Kreative Import Technologies. When Manny told us last year he was building a Barbie Hummer SUT with Mattel's approval, we were very skeptical. Pink? A word not typically associated with hairy chests and freshly grilled steaks. After seeing the Hummer and the results Manny achieves, we are now believers. Before you send us hate mail, check it out in detail. 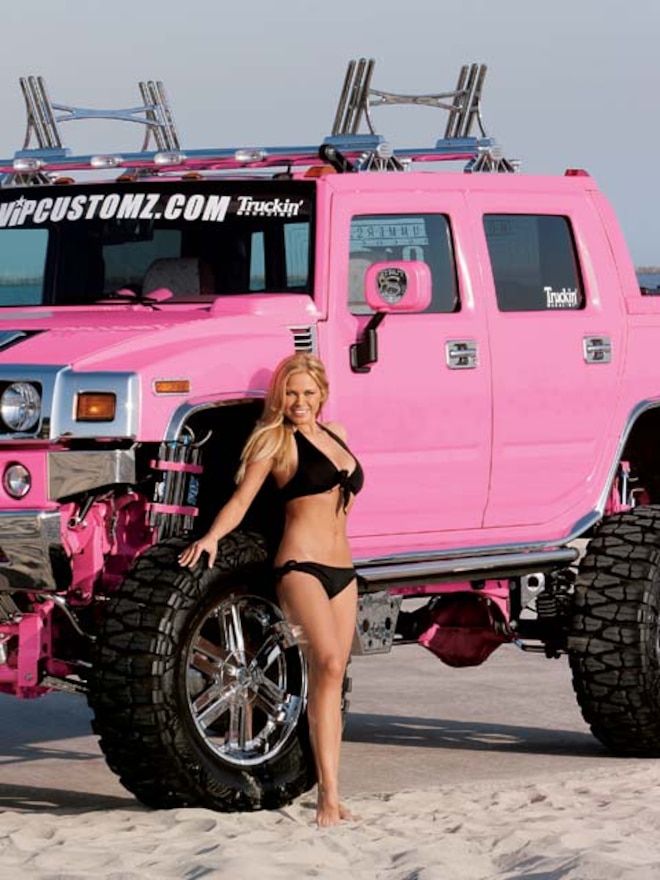 View Photo Gallery | 14 Photos
Photo 4/14   |   custom Pink Hummer H2 Sut side Angle View
Taking receipt of the silver SUT before the public could buy one, Manny, owner of VIP Customz (formerly CTL Motorsports), had the truck-crossover lifted and clearing 40s last summer. Talking with him, he said it was the perfect driver, not too high, but still clean. Looking at it now, the "under the radar" philosophy got lost in the paint booth somewhere. Starting with the stock H2 SUT, the team at VIP bolted on a Bulletproof Suspension 12-inch IFS lift kit. Using Fox Racing 2.0 Shox and the LT40x15.50x22 Nitto Mud-Grappler tires, the SUT is actually sitting a full 15 inches higher than the General had in mind. Resting securely in those 40-inch Nittos are American Racing's newest wheel addition. TIS double-deuces in chrome measuring 22x9-1/2 inches at each corner supply the rolling bling. Bringing this rolling mass to a halt are a Stainless Steel Brakes 15-inch Big Brake kit up front and 14-inch rotors out back.
Each piece of suspension would have to be quickly removed, once the plan to go pink was green-lighted. After Anaheim Plating chromed each piece of metal that wasn't painted, the body was masked off and the gun mixed with PPG Pink Panther pink. Stars and Barbie logos were ghosted from nose to tail and sparkle in the right light with the Purple Pearl and Rainbow flake paint pigments. Every piece on the skin that wasn't painted was quickly replaced with a billet or chrome counterpart from Manticore. Manticore also supplied the beautiful billet snowboard rack made out of solid 6061-T billet, and a Strut front grille keeps the SUT ahead at the shows. XTC Lighting bolted on the top lightbar at the '04 SEMA Show just in time to light the way for a new product launch. A ClearGearz diff' cover adds undercarriage good looks, and speaking of undercarriage, the entire frame is also now pink. Helping egress and ingress, a set of Amp Research power steps was added and chrome molding from International Rite-Way brings the bodyline to shining perfection.

View Photo Gallery | 14 Photos
Photo 8/14   |   custom Pink Hummer H2 Sut driver Seat View
When it came time to do the interior, Brea Upholstery, of Brea, California, had plenty of Louis Vuitton Cherry Blossom fabric to wrap the seats, sunroof, center console lid, and sunvisors. Matching pink suede covers the headliner, remaining seat surfaces, and lower portions of the dash. While removing the dash in a Hummer doesn't sound like fun to us, it didn't stop Manny and his crew at VIP from pulling it, smoothing it, and painting it PPG Pink. Opening any door reveals a host of audio and video components that are out of this world. NESA supplied the monitors-13 in all-with three 17-inch monitors mounted under the tonneau lid and the remaining screens scattered throughout the interior.

View Photo Gallery | 14 Photos
Photo 9/14   |   Pumping gas never looked better than with this 5-inch screen in the gas door.
KRU Customs performed the killer install of the video and tunes alike. Sounds can be heard bumping through four 10-inch Cliff Designs subs powered by four Cliff amps. Each rear door houses a pair of 6 1/2-inch components, while the front doors house three pairs for extra sound staging. Going over the top with monitor placement, the custom Pro Fit gas door now contains a slick NESA 5-inch monitor for instant gas-pumping entertainment.
This H2 is making the most of all of the major shows-the little bed is stuffed full of trophies every weekend. Pink. We know. But, surely you can respect this sick H2 SUT after seeing there was no rock left unturned. Next time you're in a dating drought, try picking one of these up, and see if your Louis Vuitton seats aren't filled with beautiful young ladies. Oh yeah, quit wishing you were Ken.