All You Need Is Just a Little Patience 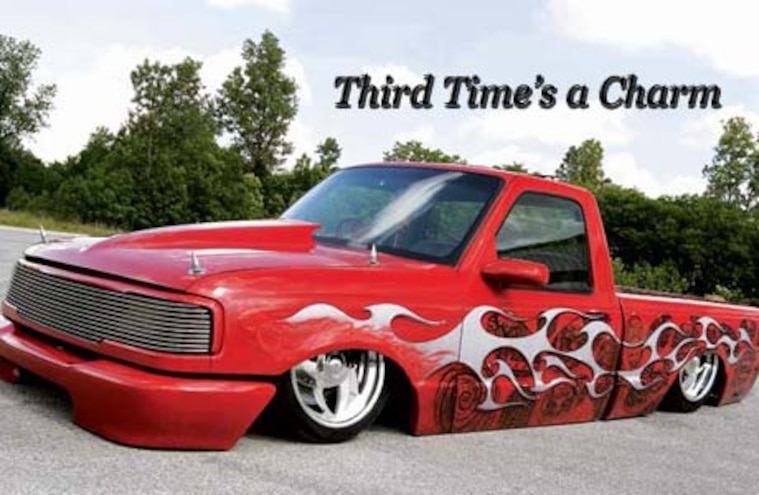 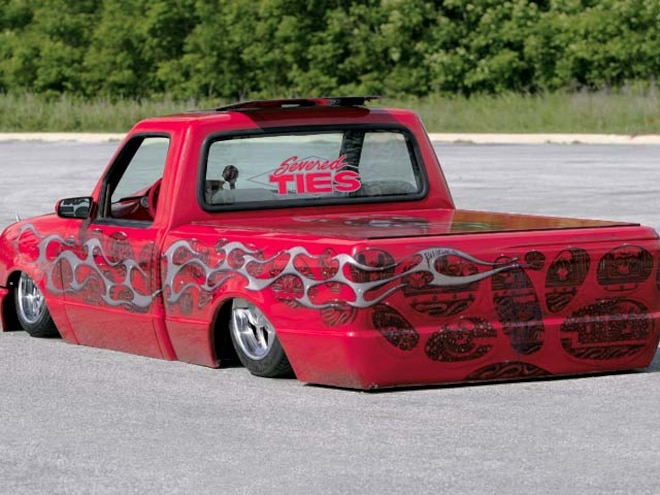 View Photo Gallery | 13 Photos
Photo 2/13   |   OWNER: Patrick ReidRIDE: '93 Ford Ranger Hometown: San Leon, Texas
Patrick Reid of San Leon, Texas, gives new meaning to the expression "off in left field."
Some people are different from the rest - heck, some people just aren't right in the head. You wonder what makes these people tick. Do they breathe the same air the rest of us do? Are they drinking the same water? According to Patrick, all is well in San Leon.
Patrick's '93 Ford Ranger, dubbed Patience, has seen more time under the knife than a "Baywatch" lifeguard. This is Patrick's third build on this vehicle in three years, each time changing personalities and getting more insane. Patrick builds almost every aspect of his vehicle himself. Every time he finished his ride, it was featured in our rag. Third time's the charm and Patrick scores with his first cover shoot. 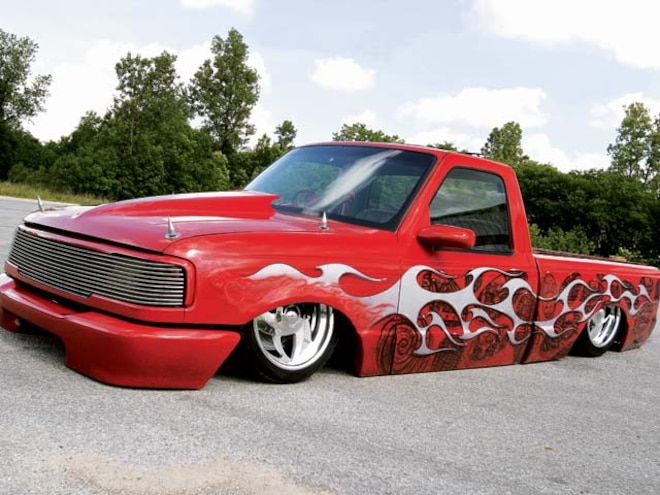 View Photo Gallery | 13 Photos
Photo 3/13   |   custom 1993 Ford Ranger front Drivers Side View
The most in-your-face feature on this truck has to be the vehicle height. Sans rockers, this vehicle has to be a treat to get into. We suggest sitting on the pavement first, then just sliding over as not to hurt yourself. The road-grating stance can be attributed to a 6-1/2-inch body drop performed by Patrick, as well as all other modifications. The suspension work up front consists of drop I-beams by AIM, with rebuilt radius arms with Firestone airbags mounted to them. All of the front suspension has been smoothed and painted. As for the rest of the framework, 3x2-inch tubing resides under the cab to assist with a spacious interior. The rear was bridge-notched and a triangulated four-link in custom cantilever fashion was added. Nitro shocks help smooth out the ride, while the 17-inch Colorado Custom Cortez billet wheels help add to the flavor. 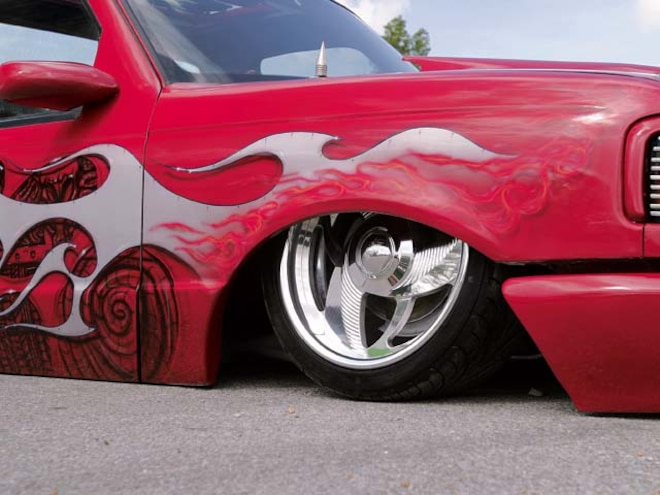 View Photo Gallery | 13 Photos
Photo 4/13   |   custom 1993 Ford Ranger front Fender
Patrick's Ranger has no problem breaking the rear tires loose thanks to a 306ci small-block Ford motor, backed by a T-5 transmission. The engine has been bored 0.030 by Strictly Performance; other engine mods were taken care of by Oddball Turbo. MSD handles distribution and ignition responsibilities, while DynoMax exhaust and ceramic-coated Headman headers flow the California air. The ultra-clean motor was painted and chromed to the max, and to add some extra flair, Moroso valve covers and billet pulleys were installed. The alternator feeds itself to a gel cell battery located under the bed. 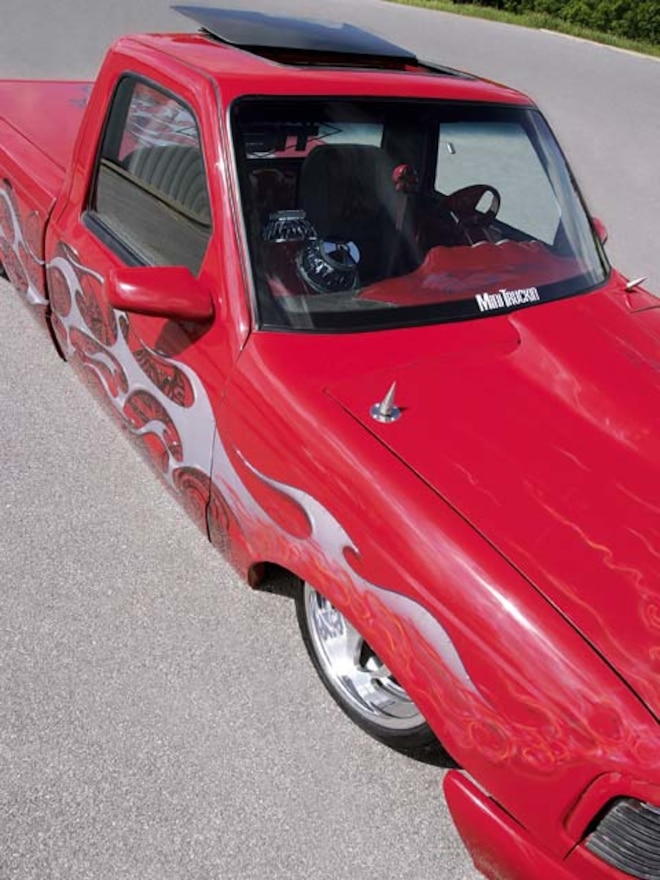 View Photo Gallery | 13 Photos
Photo 5/13   |   custom 1993 Ford Ranger front Passengers Side View
As if all these modifications weren't enough, Patrick busted out the welder for more fun. Patrick hand-formed a stainless grille for the front fascia. For the strangest mod, wanting each side to have its own personality, Patrick only shaved the driver-side body line. All the norms were taken care of, including the door handles, gas door, stake bed pockets, cab seams, and taillights. The fenders and side mirror mounts have been molded to the body.
With the body smoothed and violated, Patrick proceeded to pull out his spray gun and lay down the PPG Victory Red basecoat with Frost Silver glitter. With the red basecoat lonely, Patrick let H.R. Giger's vision bestow itself on either side of the Ranger as well as the tonneau cover. Never able to make up his mind, Patrick added flames to the mix for good measure. Usually changing oil or working under a vehicle isn't a treat, but not under Patrick's ride. Paint and graphics adorn the once bleak underbelly. 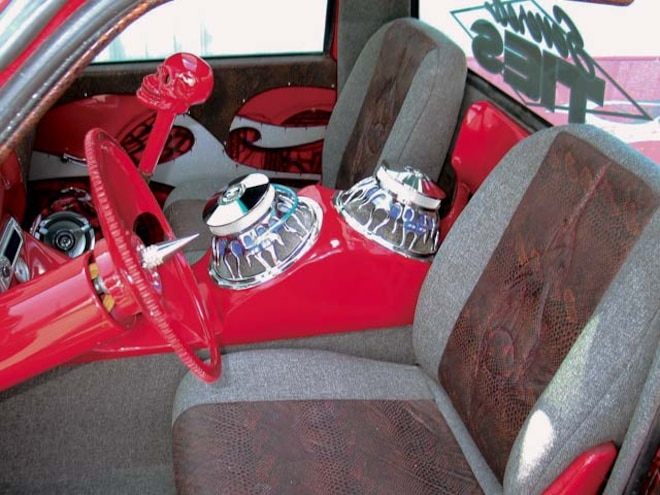 View Photo Gallery | 13 Photos
Photo 6/13   |   custom 1993 Ford Ranger custom Interior
The outside craziness also makes its home on the interior of the vehicle. The dash has been custom-formed to house performance gauges and a Panasonic CD player. The Ranger's dash was then covered with PPG Victory Red and snakeskin upholstery for contrast. Patrick used a 14-inch ring gear for his steering wheel, but added a little of his own personality due to his "I can't leave anything alone" policy. A one-off center console falls off the dash, housing two 10-inch Audiobahn subwoofers and a larger than life skull shifter. A 1,000-watt Hollywood amp helps the sound waves move effortlessly through the vehicle, while the custom-painted door panels are home to Kenwood 6-1/2-inch speakers. Grey tweed and snakeskin laid down at Stitchwork by David, in San Leon, cover all aspects of the interior that weren't painted, including the seats, headliner, and '85 S-10 buckets. 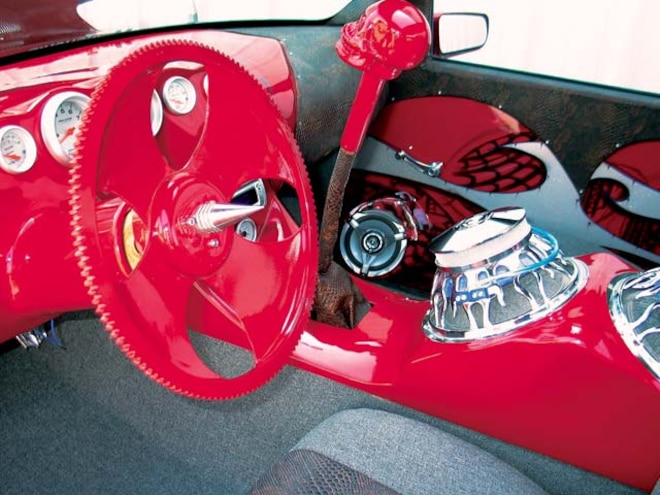 View Photo Gallery | 13 Photos
Photo 7/13   |   custom 1993 Ford Ranger custom Center Console
Most of us hope we have what it takes to finish one custom in our lifetime. However, it's people like Patrick who drive us all to know that it's possible. A lot of people would have sold the truck after its first or second build. Becoming attached to a vehicle is nothing new if you put your heart and soul into it. When building your own vehicle, just remember Patrick's motto and have a little patience.
THE LOWDOWN