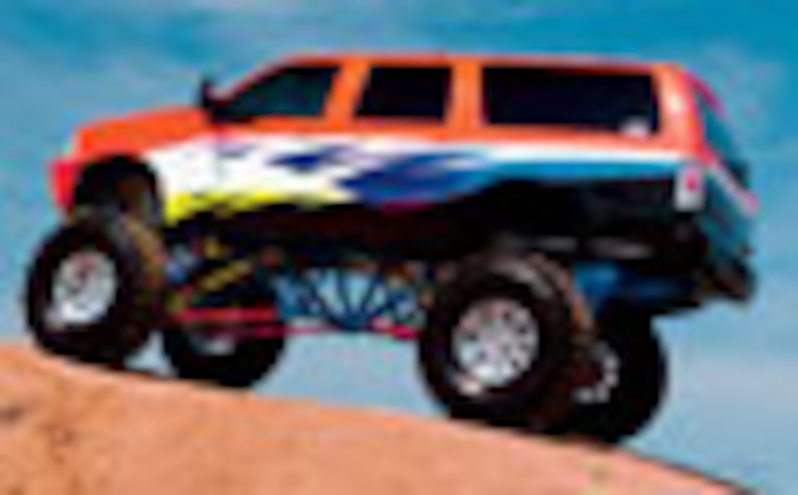 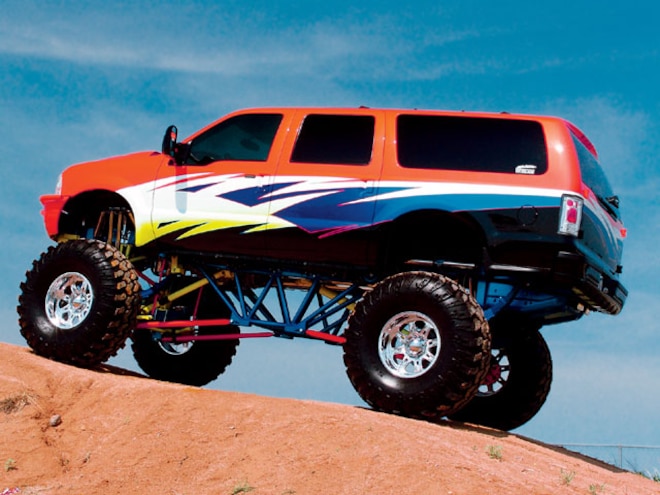 View Photo Gallery | 2 Photos
Photo 2/2   |   2000 Ford Excursion side View
Matt and Kim Rossi like their trucks big. Their '00 Ford Excursion makes other big trucks look...not so big. Both Matt and Kim have always enjoyed running 4WD trucks on the street and participating in the show circuit, although taking them off-road was never really a priority. When it was time for a new family vehicle, they chose the Ford Excursion, optioned to the max. Matt drove the truck stock at first as part of his car transport business, planning only a few minor additions. All that changed, however, when the custom bug bit and the truck started gaining altitude. During various customizing phases, Kim also enjoyed the truck, using it as her daily driver and causing quite a stir when she rolled in to her job at the day care center on the 8-inch lift and 38-inch Super Swamper tires.
As the number of mods slowly increased, Matt desired more power to turn the even-bigger tires he was planning for the truck. Although the big V-10 was great, more is always better, so Matt chose a combination of power-adders. A Kenne Bell supercharger augmented with a hundred shot of nitrous and a Jet Hot coated 3-inch dual exhaust system with Flowmaster mufflers added the extra punch. The package bumped up the stock 310 hp to more than 460 hp and dramatically improved performance.
In the winter of 2002, they decided to renovate the undercarriage, adding more heavy-duty components, designing the front and rear ladder bar suspension, powdercoating the frame, and raising it another 6 inches. Even after that, Matt could not leave well enough alone. Less than a year later, he added another foot of lift to the truck, for a grand total of 25 inches of nosebleed-inducing altitude.
Upon closer inspection, it's easy to marvel at the innovative engineering; the meticulous detailing of the undercarriage reaffirms that the Rossi's genuinely enjoy their "on-road" 4x4. When every last stock suspension component was eliminated, the powdercoated blue cradle in the center was installed-a setup similar to those used in monster trucks. The cradle holds the transfer case and the four ladder bars that stabilize both ends. The front and rear axles are heavy-duty Dana 44s equipped with 4.56 gears and are held in place by massive Atlas 18-inch leaf springs using a J&B Motorsports 3-inch shackle kit. The cradle also serves as the mounting point for the eight Fox Racing 2.0 Reservoir Racing Shox, ensuring the big Excursion takes even the biggest bumps in stride. Additional components include ORU crossover steering, a hydraulic ram assist, chrome shock hoops, and custom differential covers. Drivetrain parts from the Driveshaft Super Store include the High Angle Bad Boy Jr. front driveshaft, which uses Eaton posi units fitted front and rear for plenty of low-speed torque. The Ford AOD transmission and transfer case allow shifting into the low range from the dash. Matt says that with all the mods, the huge vehicle is quite streetworthy and easy to drive. (Special thanks to Joe and Brian Costira of J&B Motorsports for all their help.)
Once the truck could leap small buildings in a single bound, Matt turned his attention to the interior, accenting it with a Trenz billet skull steering wheel, door sills, and door panel inserts. The APC white-faced gauges and Autometer transmission and boost gauges keep track of underhood action, while the neon-blue carpet and blue and orange leather interior from Katzkin pamper the occupants.
External accessories include a Reaper Racing front prerunner bar, four Kodiak Sidewinder electric steps to make entry a little easier, four IPF J-OI driving lights, PIAA 1500 lights under the rear bumper, a Keystone hood, a Xenon rear bumper cover, a California Custom grille, APC Projector headlights and clear corners, and Altezza Euro taillights. The elaborate paint scheme begins with House of Kolor Tangelo Pearl over a white basecoat with Oriental Blue Candy over a base fade of Pavo Purple Metallic to Orion Silver Metallic. Snow White Pearl with a Lime Gold Candy fade on top transitions to black on the bottom. Blue and Orange pinstriping separates the multiple shades. Extreme Motorsports Painting in Stowe, Pennsylvania, was in charge of the spray gun wizardry, and Van Industries of Birdsboro, Pennsylvania, powdercoated the entire undercarriage with Candy Blue and Sulphur Yellow.
Now complete, the truck has become a show-only vehicle. Matt and Kim travel up and down the East Coast, as well as to the Midwest, participating in custom truck events. Looking back on the build process, Matt and Kim say they never planned to create something quite this big; it just kept growing as they added more and more custom pieces. Each time a change would be complete, they would step back and say "maybe we can fit a little bigger tire." Matt confides, "Once Super Swamper came out with their 49s, that changed everything!" Running 20x12-inch Weld Racing Cheyenne rims, the tires caused a domino effect since they had to raise the truck another foot for proper clearance.
Future plans for the high-altitude Excursion include a stereo with multiple TV monitors and, most likely, a few thousand watts. Matt and Kim are also considering a blown 514ci big-block that will add even more horsepower to the already powerful truck. Naturally, the stronger engine means changing the transfer case...and the beat goes on.