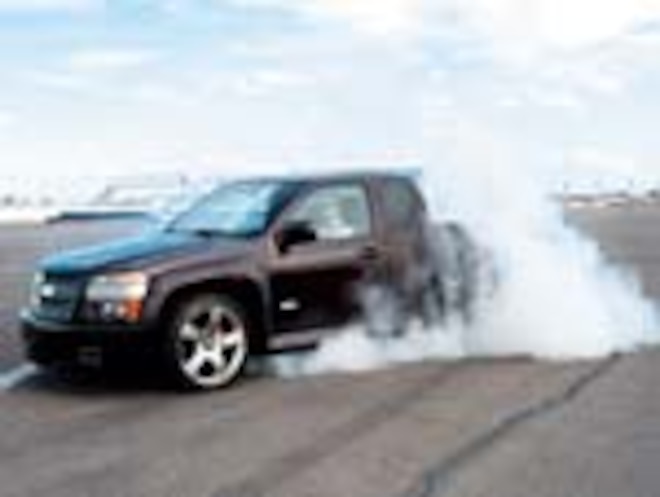 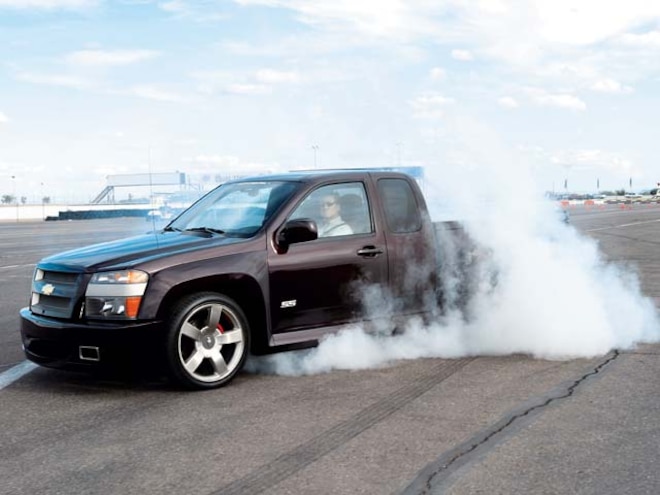 View Photo Gallery | 16 Photos
Photo 2/16   |   Living proof that this Colorado has had a Vette heart transplant is in plain view in this image. The main sensory input you're missing is the sound waves of the tire-frying 365ci engine pushing out the tones that can only be produced by the Heartbeat of America.
Many auto manufacturers have used musclecar glory days to market their new vehicles. For the most part, these new-breed passenger vehicles stand in the shadows of their name branding. This isn't the case with GM's SS-series power players. We found GM touting its SS TrailBlazer, sporting the new LS2 6.0L motor. For the GM all-aluminum-constructed engine with 10.9:1 compression, GM recommends you run 91 octane fuel, but it's not required. Of course, if you want to use every bit of the LS2's 395 hp or 400 lb-ft of torque, you'd better stick 91 in the tank.
We'll save the discussion of ridiculous price-gouging for a totally different story. But, with alternative fuels and power sources on the horizon, it's great to see that GM's not afraid to provide consumers with what they want-power. GM also had its Colorado SS concept truck out for display. This Colorado was equipped with the early version of the LS-series engines. Even though the older modular motor only has 346 cubic inches in comparison to the 365 in the TrailBlazer, this hauler has an incredible pucker factor.
We're told GM's on the fence about putting the midsize hauler to production with either of the LS-series modular engines. We're hoping GM sees that catering a V-8 to a vehicle that is more mommy-based is missing the market by not catering power to a vehicle that would be more prone to hauling. Not to mention, guys who love trucks and power are less concerned about gas prices. After seeing the Colorado SS in action, we're even more anxious to inspire GM to make the V-8 midsize a dealer showroom figure.