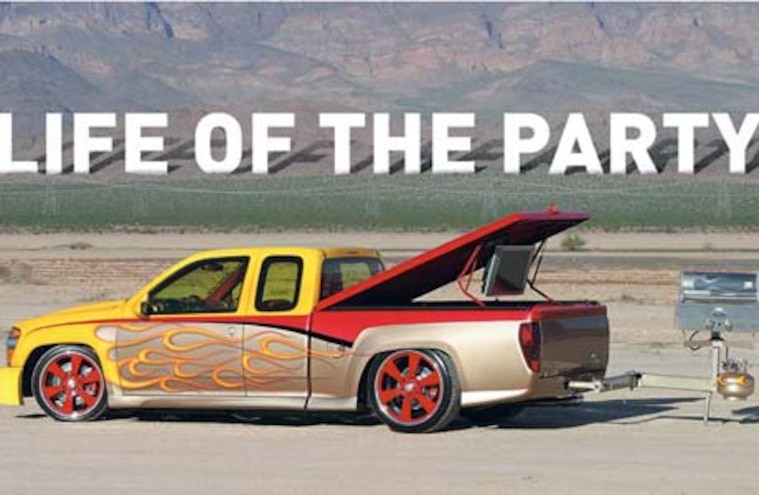 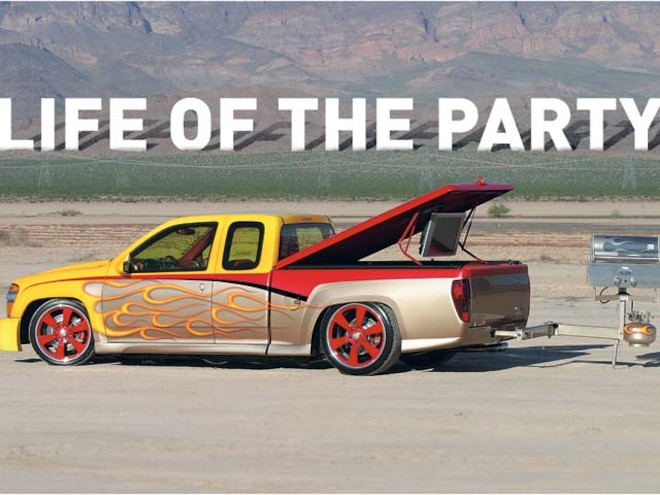 View Photo Gallery | 23 Photos
Photo 2/23   |   "In 1989, I was turned away from a local shop when looking for a custom interior for my '88 S-10. With determination and the help of the right people, I learned to sew and never looked back." - Trent Van Arsdalen
Imagine that you built a one-of-a-kind sport truck that was so unique that it prompted Van Halen bassist Michael Anthony to personally autograph it. Trent Van Arsdalen did just that. His '05 GMC "Grand Canyon" SEMA project not only attracted the Van Halen member's attention but ours as well. Anthony's interest was twofold; this truck rolls wheels from his company, Bonspeed Wheels, but it also carries with it a tailgate party theme. That theme stretches throughout the interior of this truck, which features football-stitched seating, into the bed that contains a huge LCD monitor for watching the game and a custom barbecue. When you're watchin' the Patriots spank the Raiders and cookin' up some grub for your friends, you need special sauce, right? Well, just swing open the tailgate of Trent's ride and you'll find all of "Mad Anthony's" grillin' sauces on standby and his autograph on the custom-built sheetmetal gate. Between the bitchin' grill setup, the surround sound system in the bed, and the monitor, this truck has the art of throwin' a tailgate party down to a science. Of course, we love the truck for its hammered stance and killer paintjob. 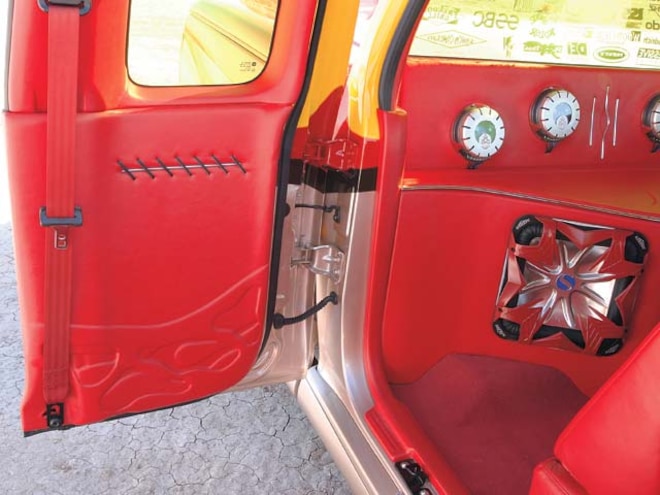 View Photo Gallery | 23 Photos
Photo 3/23   |   custom 2005 Gmc Canyon rear Cab Subwoofer Enclosure
Once you look beyond the well-executed theme that vehicles built specifically for SEMA like this one are known for, you'll find an extremely detailed sport truck. The trailer hitch-mounted Freedom Grill barbecue is a nice touch, but we especially liked the refined engine compartment of the Grand Canyon. Trent's shop, Trent's Trick Upholstery, fabricated the smooth cover for the I-5 engine, which was finished by Aaron Lynch of Lynch Concepts. The cover hides an AIRAID throttle-body spacer and twin-tube dual air intakes. Lynch flamed the cover, which also features Cool-Tube hoses and Pi-Thon hose clamps. The engine is also outfitted with a Corsa 2.5-inch stainless steel exhaust system, which helps wake up the five-banger. 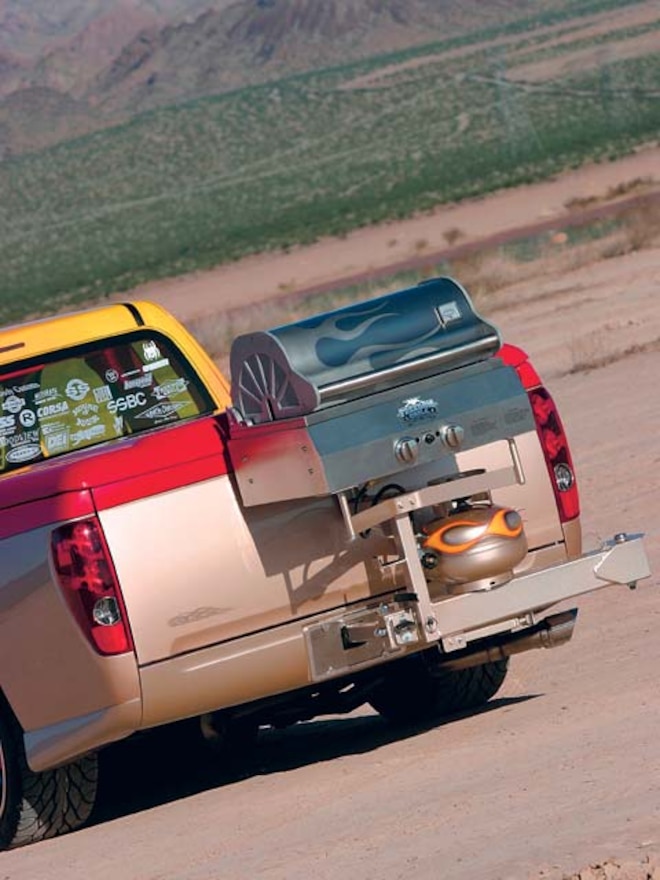 View Photo Gallery | 23 Photos
Photo 4/23   |   custom 2005 Gmc Canyon grill Setup
The Canyon is a great-looking truck to begin with, so it doesn't take much effort to refine its looks. The major modifications that we are particularly impressed with are the side-opening tailgate and custom-fabricated door and tailgate handles by Dave Dean of Lowe Body Customs. Dan Dreisbach of Naked Sculpture fame created the one-off tailgate, while Aaron Lynch added the smooth paint, which features leopard print in the striping, if you look close enough. Other exterior dress-up items include a Trenz billet grille, Street Scene mirrors and bumpers, and an ARE tonneau cover to protect the tailgate party accessories. Of course, no self-respecting sport truck owner can roll at stock height, so Progressive Automotive dropped the Canyon 6 inches up front and 8 inches out back, using Air Ride Technologies' Shockwave units and its own three-link rear suspension setup. Air Ride Tech's E-ride digital controller and electric valves control the suspension action, with Air Zenith compressors providing the motion. Rolling stock is by Bonspeed and measures in at 20 and 22 inches, respectively. 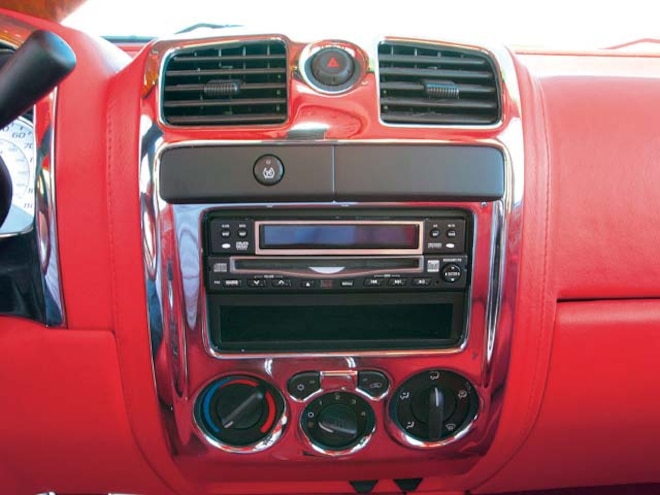 View Photo Gallery | 23 Photos
Photo 5/23   |   custom 2005 Gmc Canyon custom Interior Dashboard
Trent is well-known for crafting custom trucks such as his Coloradical Chevy Colorado, which, of course, featured his shop's amazing interior work. Trent wasn't always an interior guy, though. He actually fell into the profession after being turned off by a local shop, when he was shopping for a custom interior for his own truck a decade ago. These days, his shop is picking up the slack by turning out bitchin' interiors for its own customers. It's tough to top a truck like Coloradical, but we think he succeeded with the Grand Canyon. The football theme goes a long way toward creative genius, but it's the details that really impress us. Things like the custom-bent and padded stainless steel center console really set this interior apart from the rest of the painted fiberglass units we are accustomed to seeing. The same stainless trim piping is also found on the sculpted door panels and the subwoofer enclosure, giving this GMC a refined look.
Wrapping up the custom touches and putting the party in full effect is a rockin' audio and video system. Chad, Steve, and Dave Planton of Chillicothe, Ohio, assembled the audio system, using Monster Power Cells by Kinetik and a full arsenal of Kicker components. Obviously, the bed is ground zero for the party, so it received a 27-inch Westinghouse LCD monitor to watch Bowl games on. With the grill nearby, partygoers are treated to John Madden's bellowing voice, thanks to the 12-inch subs in the bed and 6.5-inch components. This truck has the sights and sounds that make us want to run right out and buy an extra recliner just to haul to Ohio State Buckeye games. Got room for one more, Trent?
THE 411