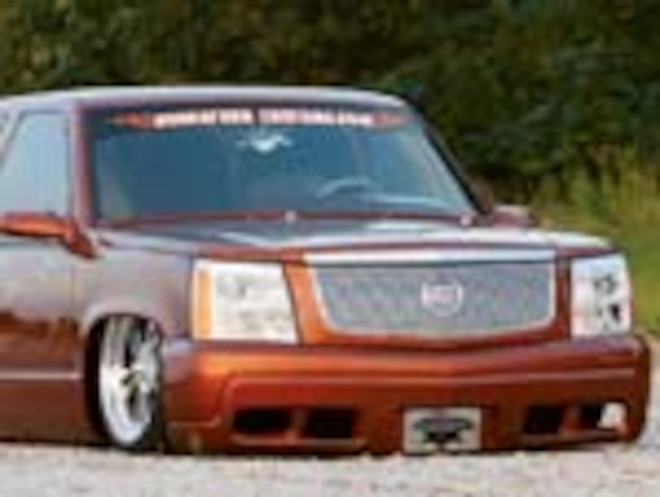 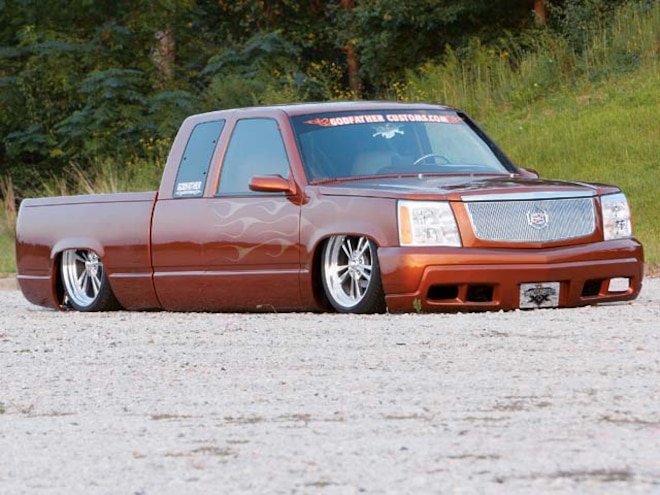 View Photo Gallery | 11 Photos
Photo 2/11   |   1993 Gmc Sierra front Left View
Hal Johnson, owner of Godfather Customs in Decatur, Georgia, has had this 1993 GMC long enough to build it twice. Actually, after the first time around Hal had a good foundation to build on, so it was really just a remodel. Hal's imagination got the better of him when he learned about Nicour's Escalade conversion for '88-'98 GM full-size trucks and '92-'00 SUVs. His '93 already had a '99 Escalade front clip, but he was in love with the '02-'06 Cadillac front clip and how it would look on his GMC, so his truck became one of the first to go under the knife. 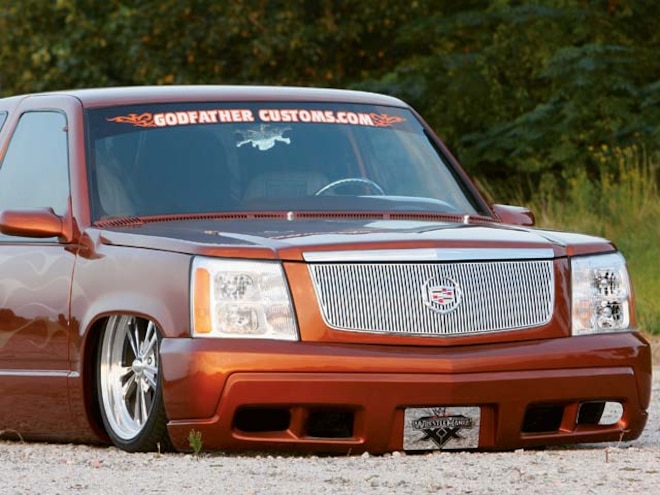 View Photo Gallery | 11 Photos
Photo 3/11   |   1993 Gmc Sierra front View
Before the truck got its new face it needed the right altitude. Dropping the front are a matching set of DJM control arms that the guys at Godfather Customs modified to fit Firestone 'bags and Toxic shocks. To provide clearance for the frame's bridge, the bed floor was raised and coated with Line-X, and then Firestone 'bags and Godfather Customs' own four-link were installed. Also under the bed floor are a 12-gallon fuel cell, stainless steel braided brake lines, and an Optima battery. 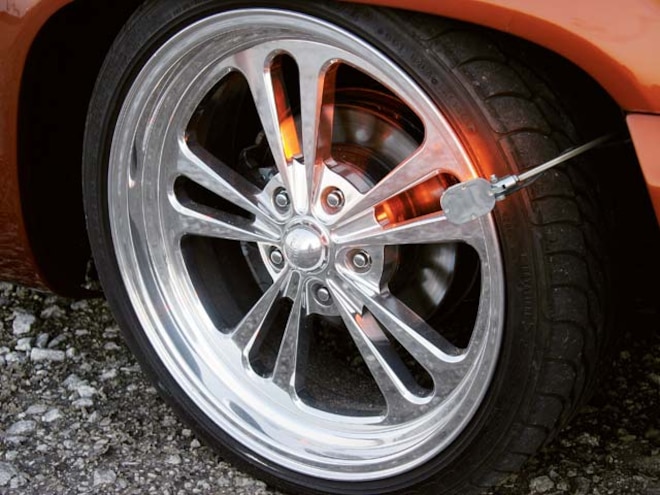 View Photo Gallery | 11 Photos
Photo 4/11   |   1993 Gmc Sierra wheel View
Hal wasn't quite satisfied with the truck's stance after the suspension was all buttoned up, so the crew at Godfather Customs began work on dropping the cab over the frame. After the front wheelwells were removed and the new floorpan was welded in place 3-1/2 inches higher than stock, the truck finally had the look Hal was after. All that chopping and dropping got the GMC 12 inches closer to the ground (which happens to be all the way to the ground, in case you're keeping track) and allows it to tuck 245/35/R20 rubber on 20x8-inch Colorado Custom Empire IIs up front and 285/35/R22 rubber on 22x10s out back. 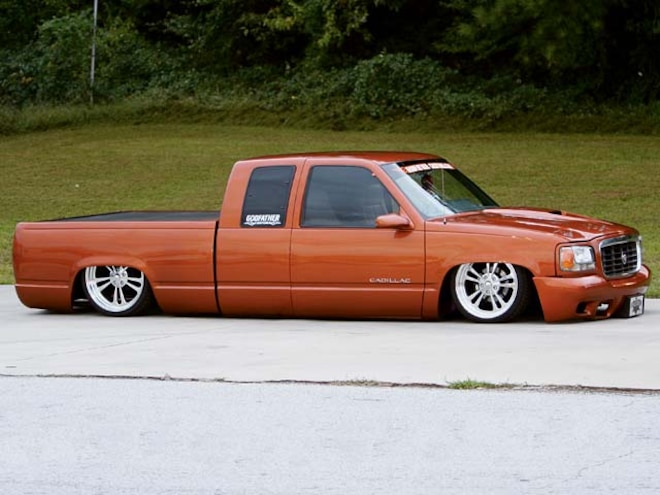 View Photo Gallery | 11 Photos
Photo 5/11   |   Before
The Escalade front clip wasn't the only modification to the GMC's body, as a host of custom touches create a clean, uncluttered look. Nicour supplied the front bumper to match its new fenders, and a Precision grille provides a little more flash than the factory piece. Any unnecessary body lines were removed as the door and tailgate handles were shaved, as were the roof line and the antenna. Godfather also built a custom bumper to finish off the back of the truck, and it's only fitting that the taillights got scrapped in favor of Cadillac Deville pieces. To further clean up the bed, a Pace Edwards flush-fitting tonneau cover was installed. Next up, the truck received the custom-mixed House of Kolor Copper that was applied in Godfather Customs' booth. 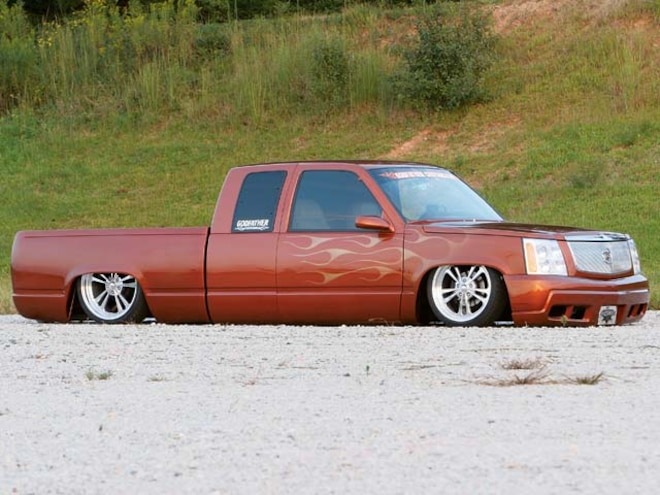 View Photo Gallery | 11 Photos
Photo 6/11   |   After
Keeping this GMC cruising is a Street and Performance 350ci TPI that breathes in through a polished factory GM intake manifold and exhales through chrome Gibson shorty headers and 3-inch exhaust. A serpentine belt running on Zoops pulleys turns the Tuff Stuff Performance water pump, power steering pump, and 140-amp alternator. Zoops was also sourced for the valve covers and the coolant reservoir that backs up a Be Cool radiator and Spal chrome fan.
Inside the cabin is more mirror-smooth copper, as Adrien at Autoformz in Marietta, Georgia, prepped the dash for paint. Qualitex seats (both front and rear) got gray leather upholstery to match the dark charcoal suede headliner and Auto Custom Carpet. A 15-inch B.A.D. Skully steering wheel leads off the billet accents, which include Ryno Manufacturing flame pedals, dash kit, doorsills, and rearview mirror. While the interior was under construction and fully stripped it got a generous application of Hush Mat to let the stereo system (pieced together using Alpine components) operate without any background noise.
We've got to say that the angular headlights and grille of the newer Cadillac front clip is a great match for the earlier-generation trucks. Hal was so pleased with the results, he made sure that Godfather Customs would be the exclusive distributor of the Nicour conversion; so if you're looking to add a newer Cadillac clip to your GM truck or SUV, contact Godfather Customs at 1-800-231-1101 or on their website at www.godfathercustoms.com.