A New Slant on Roadsters 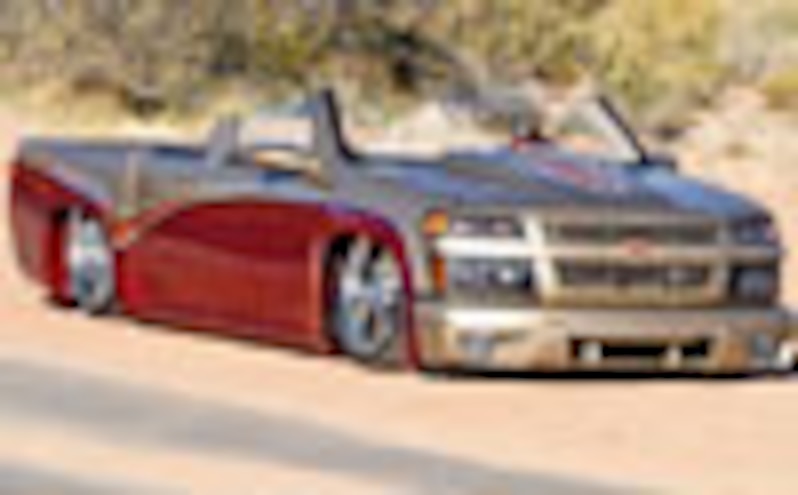 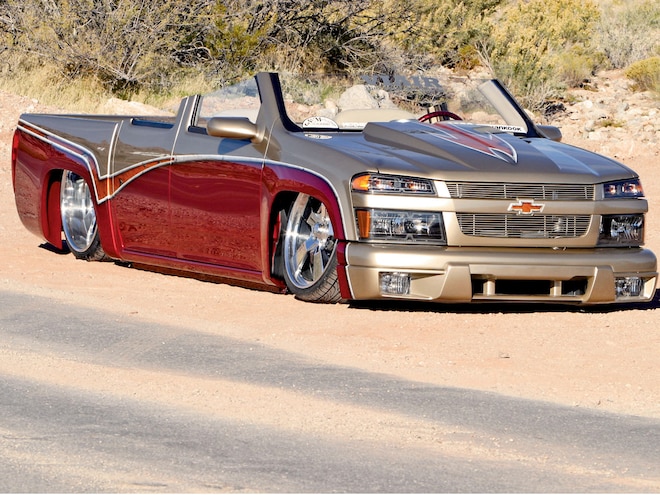 View Photo Gallery | 2 Photos
Photo 2/2   |   2005 Chevy Colorado front Right View
When it comes to advertising your custom fabrication skills, few methods compare to showing off your skills in 3-D with a rolling billboard. There's just no better way to display the talent that is necessary to transform the bland into the extraordinary, and hands down, the place to show off your creation is the annual SEMA show in Las Vegas. Like many other builders working toward a SEMA deadline, Bryan Gillespie was faced with a tight schedule, but as you can see, he put in the extra hours to turn his '05 Colorado into a roadster in the hot-rod tradition.
Bryan owns Cool Cars, the manufacturers of CCE hydraulics, so it was no sweat deciding which direction the suspension would be going. The crew at Cool Cars is responsible for all of the body and suspension mods that allow this Colorado to lay rockers, including the 2-1/2-inch body drop and installation of DJM A-arms. All that hacking on the body still didn't net enough clearance for the 22x8-inch and 22x10-inch Bonspeed Huntingtons that Bryan had earmarked for this Colorado, so the rearend was narrowed by a full foot and the frame went under the knife for a seriously low ride. The front was Z'd 3 inches and the back half uses a custom cantilevered four-link design using 1-1/2-inch tubing. Bryan adjusts ride height via CCE's touch screen airbag controller, and Firestone airbags up front and 2,600lb 'bags in the back. Pressure comes from Viair 460 pumps feeding three 3-gallon Firestone tanks. The entire system is plumbed with a Cool Cars 3/8-inch air ride kit and uses 3/8-inch SMC valves.
Apparently, a body-dropped Colorado that lays rockers wasn't enough for Bryan, as the guys tore into the crew cab with plasma cutters and reciprocating saws flying to get rid of the roof and C-pillars. That's not to say that the finished product is crude - far from it. In fact, the tops of all the remaining pillars are nicely filled in and Speedglass follows the slanting lines of the remaining pillars. While the guys in the fabrication shop were at it, the rear doors got the suicide treatment and the body lines were cleaned up by adding a Sir Michael's roll pan, deleting the factory door handles, and welding the tailgate shut.
Thompson Hot Rods in Louisville, Kentucky, stepped up once Cool Cars had formed the steel and undertook the mighty task of prepping and painting the body. After priming and blocking the panels flat and true, they sprayed a champagne and burgundy two-tone that gives the Colorado a bit of Tri-Five Chevy style. With a smooth canvas to work on, Mutant (also in Louisville) laid the realistic metal graphics down the length of the body and across the hood and tailgate.
With the top removed there's no hiding a sub-par interior, so Cool Cars had to pull out all the stops. The interior integrates audio components throughout, as MDF and fiberglass door panels hold four Infinity 611A amps and four Infinity 60.7cs and 50.7cs speakers. A custom fiberglass dash panel holds an Infinity 50.7cs for the center channel, while the new lower dash is home for a pioneer Avic-N1 CD/DVD/navigation unit. Finally, four 10-inch Infinity subs thump from the fiberglass console between the custom-built rear seats.
To provide the finishing touch, Scott's Upholstery in Louisville, Kentucky, covered the Cool Cars handiwork in tan leather and burgundy suede with snakeskin accents. The color choices were critical. Like we said, there's no hiding that interior. But with such a well-thought-out color scheme and seamless audio integration, putting a top on this roadster would be a crime.