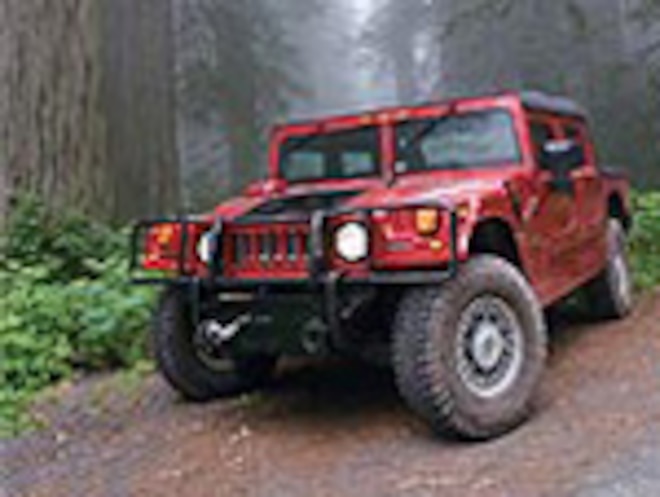 A 45:1 crawl ratio with helical gear-reduction hubs, a Central Tire Inflation System with 37-inch runflat bead lock wheels, a locking transfer case, locking front and rear differentials, four-wheel independent suspension, inboard mounted disc brakes, skidplates, rocker guards, and an auxiliary fuel tank. What could make the HUMMER H1 better? How about a 6.6L Duramax turbodiesel engine with 300 hp and 520 lb-ft of torque? Throw in the heavy-duty, five-speed Allison transmission and you've got the best civilian Hummer ever: the H1 Alpha. General Motors decided to save the best for last, and then cancelled production of the H1.
One for the RoadBy the time you read this, the last Hummer H1 built for the public has already rolled off the assembly line. Since it's always fun to take a road trip and go camping with an old friend before they move away, we decided to spend some quality time with the H1 Alpha. We packed up the bed of our Flame Red open top Hummer, filled the fuel tanks, pointed it north, and followed the 101 freeway up the California coast. The Duramax was put to work as we pulled grades and snaked our way through San Francisco and up to campsites near the Oregon border. And, no, we did not get egged for driving the environmentalists' scapegoat through the Bay Area-although we did once get nailed by an egg while driving an H1 in Los Angeles a couple of years ago.
Thanks to the smaller (but still giant) transmission tunnel introduced in 2004, our passenger did not require medical treatment for a warped left ankle or knee after spending many hours in the front seat. In addition to the improved physical layout, the performance of the new drivetrain made driving the H1 much more enjoyable. Leaving from stop signs and accelerating onto freeways is much easier, and you can almost forget that you're driving a truck that weighs more than 7,000 pounds. After a week of driving it every day, you finally get used to the machine's width. You develop your braking technique to avoid the "Hummer-rock" (caused by the inboard disc brakes and the geared hub lash) when you come to a stop. And you stop noticing everyone you pass-checking you out as you drive by.
H1 Duramax TurbodieselA 2-inch body lift was required to fit the Isuzu/GM-designed 6.6L Duramax where the original 6.2/6.5L Optimizer used to sit. Hummer decided to install the LLY-coded engine, which is rated at 300 hp and 520 lb-ft of torque. That instantly gave the Alpha 46 percent more horsepower and 18 percent more torque than the last Hummer. This knocked three seconds off the zero-to-60 acceleration time, which is now 13.5 seconds. The towing capacity was also increased by more than 1,500 pounds. The Duramax greatly improved responsiveness both on- and off-road. Plus, the significantly improved fuel economy of the new engine combined with larger dual fuel tanks increased the range from 400 miles to about 570 miles per fill-up.
Allison 1000 Transmission

Fuel economy is also aided by the five-speed Allison transmission often found in the Chevy/GMC 2500 and 3500 pickups. It has more gear ratios than the previous 4L80E transmission it replaced, and it has a higher (0.70:1 vs 0.75:1) overdrive gear for better fuel economy at highway speeds. The Allison is also stronger and rated to handle 620 lb-ft of torque (the previous transmission was rated at 440 lb-ft). New axle halfshafts and steering gear were also added to help deal with the extra torque produced by the Duramax.
Fuel Economy: How Far on How Much
From Los Angeles we headed due north toward Redwood country, where the tallest trees in the world grow. What better place to take the largest (red) SUV on the planet? Driving North on I-5 where the speed limit is 70 mph, the H1 Alpha motors down the highway with little concern for grades, passing slower vehicles, or slugging down the #2 Diesel. We passed a few 6.5 and even gas-powered Hummers on our trip, and it was clear the Duramax brings this vehicle to a whole new level of performance. The direct-injection engine seems to run much cooler than the IDI 6.5L, and we never got the Allison 1000 to break a sweat.
Over our 1,700-mile roundtrip (loaded down with food and camping gear for two) we managed just over 10.1 mpg. Considering the A/C was always on, the speeds we were traveling, and the fact that we dialed the central tire inflation system down a few psi for a smoother ride-it could have been a lot worse. Don't kid yourself here. A machine like the Hummer is built for many things-fuel consumption is the price you pay for its high mobility.
Alpha Bits New for 2006
* Duramax 6.6L (LLY) turbodiesel engine
* Allison 1000 (M74) five-speed transmission
* Towing capacity increased by 1,400-plus pounds
* New helical-cut geared wheel hubs
* 3 seconds faster 0-60 mph
* 170 miles increased range
* Stronger axle halfshafts
* 1.5-inch larger brakes
* 2-inch body lift
The Farm That Wasn't: Radar Station B-71 "Trinidad"

While roaming Northern California in the H1 Alpha, we noticed something on the map that looked like a piece of armed forces history. Since the Hummer was based on a military vehicle, we thought it was only right to have it visit some relatives during its final voyage. It turns out the dot on the map on the coast of Klamath, California, was a top-secret, diesel-powered, early-warning radar station that was built to look like a farm to avoid detection.
After the Japanese bombed Pearl Harbor, the nation went on alert for assaults on the West Coast. In 1942, enemy submarines shelled a refinery in Santa Barbara, California, and ports in Washington and Canada. A Japanese sub even launched incendiary bombs into the forests of Oregon during September of 1942. To help prevent other incidents, an Army contractor was hired to create radar station buildings disguised as a farmhouse, barn, and an outhouse. They featured two-foot thick cinderblock walls with wood shingles and facades for camouflage. The farmhouse hid a diesel generator (we guess it was a Detroit Diesel, but would like to hear from anyone out there who knows for sure), which powered the SCR-271 radar equipment. In addition to the electronics were two 50-caliber anti-aircraft guns.
Radar Station B-71 (also known as Trinidad or the Klamath River station) was manned by 35 soldiers from the Army Air Corps. They were all armed with rifles and kept the station in operation 24 hours a day, reporting any potential attacks to officials in San Francisco. Near the end of World War II, the Klamath River station was converted to an air-sea emergency rescue station. After the end of he war, Station B-71 was abandoned and became private property until the National Park Service acquired it during the creation of the Redwood National Park.