Inside the 350+ mph JCB Dieselmax 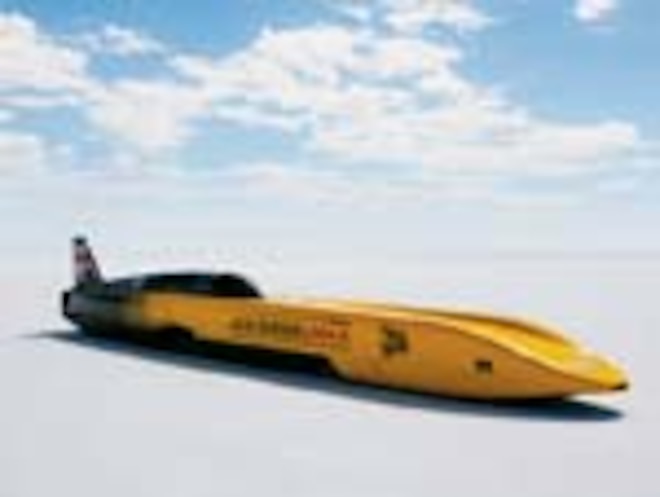 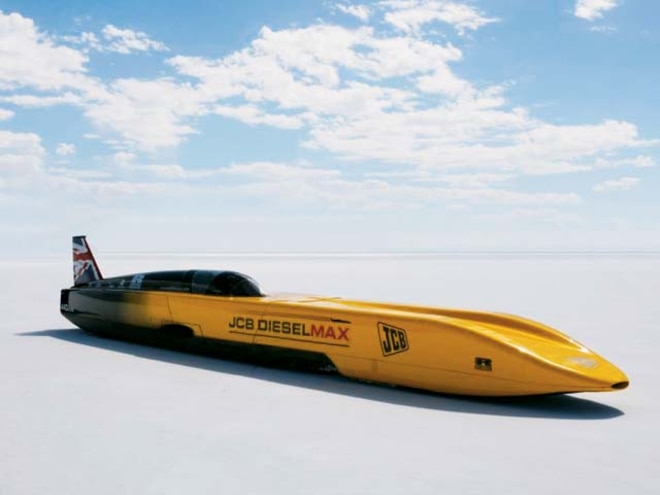 View Photo Gallery | 24 Photos
Photo 2/24   |   diesel Speed Record Car lead Photo
By now you've no doubt seen the world-beating Audi R10 diesel race car, and if you're a real enthusiast you may have heard about Eric McBride's 7.55-second diesel dragster. What you're looking at here is the newest record-shattering diesel vehicle on the planet. It's the JCB Dieselmax, and it's the fastest diesel vehicle on Earth.
Building the fastest anything isn't easy. But owning the world's fastest something sure makes all the hard work seem worthwhile--especially when it's diesel-powered. The JCB Dieselmax is a diesel land-speed race car built to travel more than 300 mph across the famed Bonneville Salt Flats in Utah. It is the marketing tool of a British-based worldwide construction equipment company, and it's the handy work of dozens of world-class British engineers.
The car was born out of the interest of Sir Anthony Bamford, Chairman of JCB Group, in exploiting his company's newest engineering endeavor (the JCB444 diesel engine) to set the international diesel vehicle land-speed record. The current diesel record (235.756 mph) was set by Virgil W. Snyder in 1973 in the Thermo King Streamliner. And Carl Heap holds the Southern California Timing Association record at 272.685 mph in his '47 International K-7 truck powered by a 16V92 Detroit Diesel. By the time this project meets its goals, both of those speeds will have been surpassed.

View Photo Gallery | 24 Photos
Photo 3/24   |   diesel Speed Record Car engine Schematic
Turning the 140hp JCB444 into a 750hp race engine began in January '05 by a group of Ricardo engineers led by Matt Beasley. The JCB444 LSR (Land Speed Record) engines are based on production cast-iron engine blocks and cylinder heads. In race trim, the engines weigh 881 pounds. They've been bored and stroked to 5.0L, and the redline was raised from 2,200 to 3,800 rpm, thanks to a lightened steel crankshaft and new connecting rods. The compression ratio was dropped to 10.5:1, and the boost was raised to more than 87 psi with compounded turbochargers. Each engine benefits from an intercooler between the two stages of turbocharging, an aftercooler, and water injection to reduce intake air temperature more than 100 degrees Fahrenheit. Three oil jets cool the bottom of the pistons (at a rate of 5 1/4 gallons a minute), and the engines must be warmed with external heaters (they run at 195 degrees) before being fired with a laptop computer.