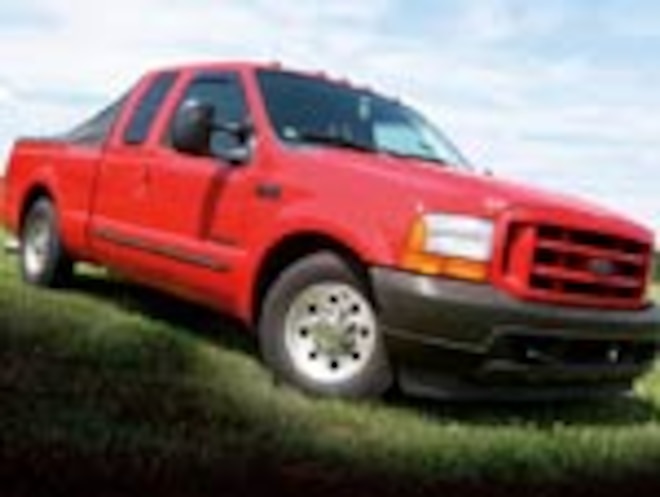 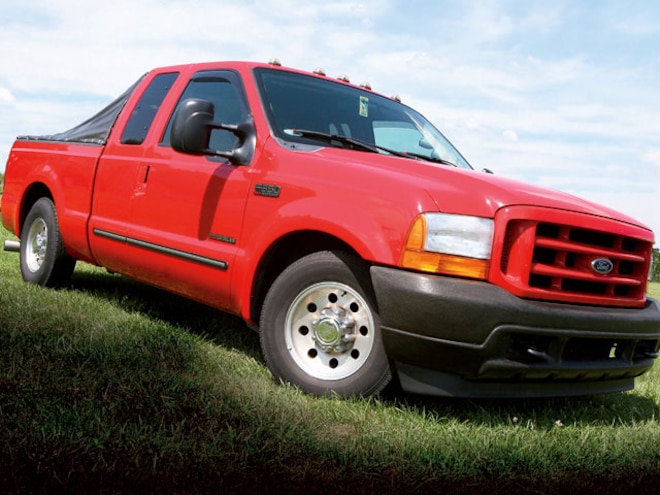 View Photo Gallery | 11 Photos
Photo 2/11   |   2000 Ford F350 Pickup front Passenger Side View
The Man
Dave Whitmer of Greenfield, Indiana, is not afraid of a challenge and assigned himself with the task of making a Super Duty into a Super Commuter. He puts more than 35,000 miles on his truck each year while working as a utility engineer at Ball State University and wanted to improve the mileage. Dave is no rookie in the world of diesel technology. He went to work for a diesel locomotive factory right out of high school and has been driving oil-burner trucks since 1983. In fact, Dave was driving a GM truck with an underwhelming 6.2L under the hood before he bought this F-350 in 2000.
The Machine
Now, Dave had the perfect platform to build a fuel-sipping project: a two-wheel-drive truck with a six-speed manual transmission and a 3.73 rear gear set. That's a decent axle ratio for fuel economy, but after some searching, he was able to find a 3.08 ring-and-pinion that would fit inside the differential. It's filled with Amsoil synthetic lube and allows him to cruise at 60 mph at 1,450 rpm (or 70 mph at just 1,700 rpm), which immediately slowed down the needle inside the fuel gauge.
With the engine revs under control, Dave embarked on improving the efficiency of the 7.3L Power Stroke. He added a large aftermarket air filter and a 4-inch exhaust system, then disabled the backpressure valve on the turbo that had caused him to lose about 2 mpg during the winter. He also added a 203-degree thermostat that keeps the engine running hotter than stock, which improved his mileage by three-quarters of a gallon (even more in the winter). The cooling system also had all the water removed and replaced with Evans waterless coolant made of 100 percent propylene glycol. The last drivetrain modification was a custom-burned chip that decreases fueling and advances injection timing under 2,000 rpm to maximize mileage. Above two-grand, the chip switches to its performance mode, which is good for adding 56 hp at the rear wheels.
Engine tricks aren't the only modifications responsible for the magic number 26. You've probably noticed the custom faring constructed over the pickup bed. It's made from the rubber matting used for tread on stairs (with the ribbed side facing down) which is said to eliminate the drag created when air comes off the roof and drops down into turbulence created in the bed. An Excursion bumper was mounted up front because it has an extra-long spoiler that doesn't come on a Super Duty. This modification is very effective at keeping air from causing drag on the undercarriage because the truck has been lowered by 3 inches in the front and 4 inches in the rear.
The Future
Dave has already managed to improve the fuel economy to 26 mpg (up from the stock 20 mpg), so what's next? Lots of things. He's been eyeing a conveyer belt that would make a good front air dam extension, he'd like to remove the side mirrors and replace them with small video camera pods, and you may see land-speed record style solid-face wheels at the corners. Some more expensive modifications being considered include bobbing the bed and using a tonneau cover mounted at a 25-degree angle over the bed with custom side panels.Even without making any other modifications, Dave can drive happy knowing he's dramatically improved the fuel mileage by 30 percent over a stock Super Duty. A Chevy Malibu also gets 26 mpg on the highway, but wouldn't you rather drive a 1-ton?