Our First Look 4 Years Ago at the 6.0L Power Stroke 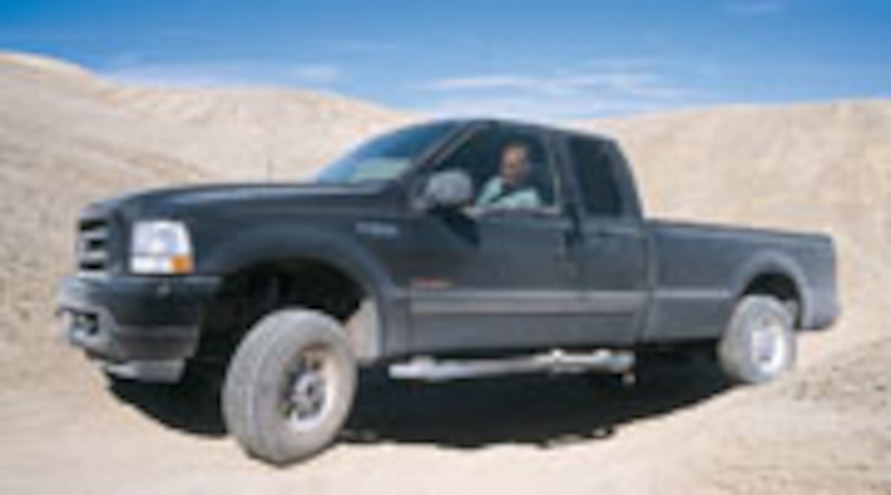 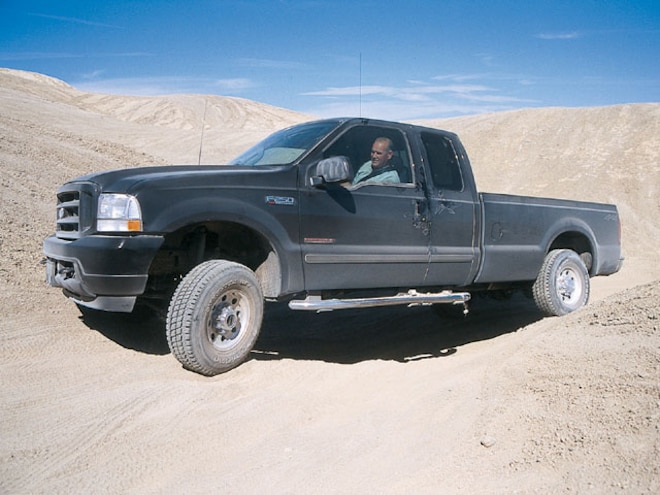 View Photo Gallery | 4 Photos
Photo 2/4   |   2003 Ford F250 Power Stroke side View
The first thing we noticed about the new 6.0L Power Stroke was how much quieter the engine was. The second thing we noticed was how the power came on above 1,500 rpm like a freight train. With 325 hp, 560 ft-lb of torque, and the five-speed auto tranny, we could outrun the '03 Cummins truck with ease. When we popped the hood to look at the new International/Navistar powerplant we concluded that we could have done a cleaner job of swapping this engine into the F-250. The new Torque Shift five-speed automatic transmission got mixed reviews from the judges. Some thought it didn't downshift when it should, others fell in love with the way it would rifle through the gears as you blasted away from a traffic light. The new "Tow/Haul" mode did work to downshift the truck and slow hill descents, but we didn't think it was as effective as the Allison 1000. Perhaps the most unique feature of this transmission was that you can select a Second gear, and even Third gear starts from a standstill. We suppose that if you were driving in slippery conditions it might be hard to control wheelspin with that much torque on tap.
We were so busy enjoying the new power of the 6.0L that we almost overlooked the Super Duty's wallowing suspension and three-lane-wide turning radius. But no such luck! The Ford was judged to ride almost as well as the new Dodge trucks, but it wouldn't carve corners or weave down back alleys like the Ram did.
Likes* Hot rod diesel engine* Five-speed transmission* Monochromatic look
Dislikes*Unnecessary running boards*Empty dashboard*School bus turning radius
KellEy Blue BOOk Value$30,694with 53,000 miles

View Photo Gallery | 4 Photos
Photo 3/4   |   2003 Dodge Ram 3500 Common Rail side View
'03 Dodge Ram 3500 Common Rail 5.9LOur First Look 4 Years Ago5.9L Common RAIL CumminsThe Ram 3500 was a brute, and it was the one everyone wanted to take home at the end of the test. Visibility was good on the road, but the massive A-pillars and tall cowl can limit how well you see that Hyundai in front of you. The Ram 3500 shared many components with its 2500 series brother (1410 U-joints, AAM axles, NVG 273 transfer case) we tested, but the Cummins diesel-equipped 1-ton actually rode better than the Hemi Ram, thanks to its optimized spring and shock tuning. We couldn't say enough good things about the new H.O. Cummins and felt cheated that the 305 hp/555 lb-ft diesel wasn't available in California. When mated to the NVG 5600 six-speed (the automatic was not available with the high-output package), the Cummins made the 7,150-pound truck accelerate like a pickup half its size. Even though the 3500 was slower at the dragstrip than the Hemi 2500 (hey, it takes some time to shift through all those gears), it still felt like it had more power than everything but the 6.0L Power Stroke. Under the hood the inline-six engine was set way back, but there was still room to service everything and maybe even add a second turbo. Inside the truck, judges still thought that the Dodge seats were too hard and flat and that the shifter was a little rubbery and not always easy to get into gear. Be prepared to shift this truck a lot on the street because of the close gear spacing, and don't be afraid to experiment with Third gear launches in the sand just to keep a lid on the explosive wheelhop. Overall engine noise was lower this year, thanks to a new Bosch common rail pilot-injection system. Cummins owners, however, will not be disappointed with the turbodiesel sound or the newfound horsepower. This was a tow vehicle to fight over!
Likes* Earth-moving torque* Six-speed transmission* Tons of cargo space
Dislikes*Needs a seven-speed tranny*Rear limited slip*Small rpm range
KellEy Blue BOOk Value$32,950with 53,000 miles

View Photo Gallery | 4 Photos
Photo 4/4   |   2001 Chevrolet Silverado 2500hd Duramax side View
'01 Chevrolet Silverado2500HD 6.6L DuramaxOur First Look 6 Years ago 6.6L DuramaxThe GM/Isuzu Motors 32-valve, aluminum-head 6.6L replacement for GM's 6.5L diesel was the star of this new platform. The turbo took about one second to spool up, then boom-you'd better be ready for a surge of oil-burning acceleration. The new heavy-duty Allison five-speed auto electronically controls shift timing and locks up the torque converter in lower gears when in "Tow/Haul" mode to prevent overheating. The Allison shifted with a nice, firm feel, but it did shift a lot and there was no overdrive "off" button. We needed to manually pull the shifter down from "D," which was annoying in some situations.
Inside were the same Barkalounger captain's chairs, radio with big, logical controls, and center console with room for a baby elephant as before. However, there was plenty of ludicrousness, namely in the form of a 229.5-inch long vehicle with poor rear legroom and brakes that worked well on pavement but not in the dirt. The ABS released way too early, resulting in a loss of stopping power and causing some pretty hairy situations on muddy mountain roads. Then there's GM's OnStar system, which combines GPS with cellular technology to pinpoint your exact position and speed in case you're lost, broken down, or just lonely. Welcome to the age of Big Brother.
Around town the 2500HD was surprisingly agile for a vehicle of its size, but we were reminded of its length, especially when trying to park. On the highway the familiar diesel clatter goes away, only to be replaced by the most awful bucking you'll ever find outside of a rodeo. It's a 31/44-ton truck that sure rides like a 1-ton. However, with super-low gearing and the age-old Gov-Lock, the diesel strutted its stuff in our rockcrawling tests despite an enormous breakover angle, an exposed tranny filter and pan, and a diesel fuel cooler mounted in harm's way next to the unskidplated plastic fuel tank.
Likes* Obscenely powerful diesel* Crawls like a conveyor belt* Best-of-bunch mpg
Dislikes* Rough ride on- or off-road* Tight rear seating* Sticker shock
KellEy Blue Book Value$25,970with 70,000 miles