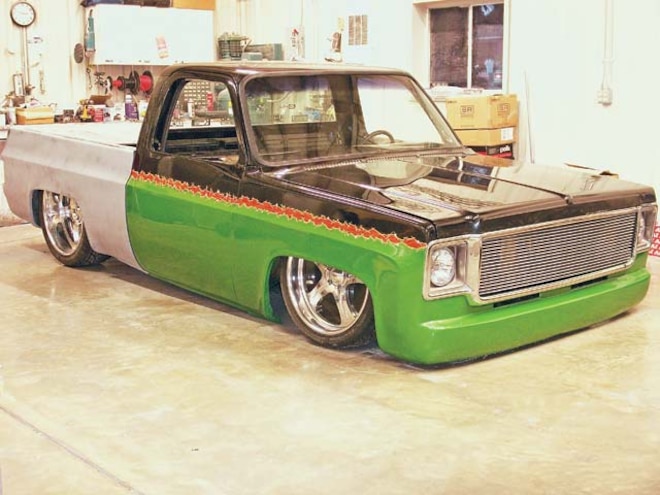 View Photo Gallery | 11 Photos
Photo 2/11   |   1980 Chevrolet C10 front Passenger Side View
There comes a time in every person's life when they must step back and take stock of a project truck. When you're so deep, deep, deep into a project that you can't see the light at the end of the work bench, when your wife dare not enter the garage for fear of being pelted by a flying Crescent wrench, when the money runs out and all hope is lost, you have to make a decision. You can either cut your losses and run as fast as you can away from that hole in the garage draining your pocketbook, run just as fast to the bar to spend your last buck on some suds to drown your sorrows, or simply take a break from the madness and pick up where you left off when you're in a better place, mentally. Each alternative has its merits, although we've never seen beer magically make bodywork disappear, and running away from home doesn't look too cool once you're out of high school. God knows we've seen quite a few projects change hands when the money runs out. We've also seen a bunch just wither away into a pile of rust after being pushed outside into the elements, only to be forgotten. Either scenario is a dismal end to something that had all the potential in the world to be a fun truck to drive, if you could just see it through to the end.
The following pages of Sport Truck are dedicated to some folks who have a great shot at seeing their projects through. Some are further along than others, and there's always a chance that a few won't make it to that magical land of painted sheetmetal and completed interiors. But, each owner has one thing in common: They are all nuts. These are arguably the most hardcore sport truck owners and builders on the planet. The trucks you are about to see are sick and wrong and we love them for it. They are long-term labors of love. Some have been under construction for five years or more. We'd be surprised to see a daily driver among this lot, even though a few are being built to be driven hard and fast. We have everything from insanely fast turbo'd mini-trucks to ultra-hammered fullsizes, so there's bound to be something you can glean inspiration from. So, sit back, relax, and hit the fan in the bathroom, because you're gonna be here for awhile drooling over the detail work of the best project trucks in America. 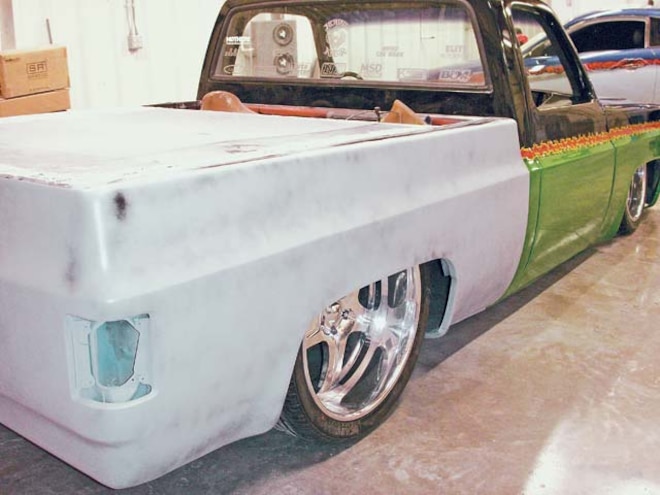 View Photo Gallery | 11 Photos
Photo 3/11   |   1980 Chevrolet C10 rear Passenger Side View
Mike Cotten from Midwest Images in Illinois has been hammering on this '80 Chevy C10 for about 7 years. He picked it up from his next door neighbor, lowered it, and drove it as a daily driver for 5 years. Just when Mike was ready to tear this sucker down, he found out he was going to be a daddy, so he parked the truck and focused on work. After the baby was born and life slowed a little bit, he pulled the truck into the shop and fired up the plasma cutter and body-dropped the truck 7 inches. That first modification, even though it was a big one, is just a taste of all the custom stuff Mike has done. The truck tucks the lugs on the 22- and 24-inch rolling stock, thanks, in part, to the air suspension. Just because this truck is 'bagged hasn't stopped Mike from making it still work on the track. Under the hood, you will find an LS1 with some sneaky head porting, a new cam, and a 500hp nitrous setup, all under a handbuilt sheetmetal cover. The shifts come from a built 4L80-E transmission that feeds the power to a narrowed 9-inch and triangulated four-link back half.
So, the truck is low, and it should haul ass, but what about looks? Well, Mike is just as passionate about the look as he is the performance. One of the more out-of-the-norm modifications has to be the shaved side windows. Mike threw away the glass and completely capped the window area of the door kind of like a hard-top roadster. Everything else has been shaved. The bed was completely welded shut and moved forward a couple of inches, and a handbuilt dash flows between the doors and the custom console. Everything that is not painted in the interior will be covered in black leather, including the floor. Other fun things you will find inside include a slew of Auto Meter gauges, a B&M Pistol Grip shifter, some reworked seats snatched from an early Nineties Grand Am, and a full Polk Audio system with subs in a blow-through configuration. Back to the paint, Mike will complete the House of Kolor Cotten Green (Mike's own mix), black and orange two-tone scheme once he finishes the blocking on the bed.
By the time you read this story, the truck should be done, and if it is, you will see the full feature soon.