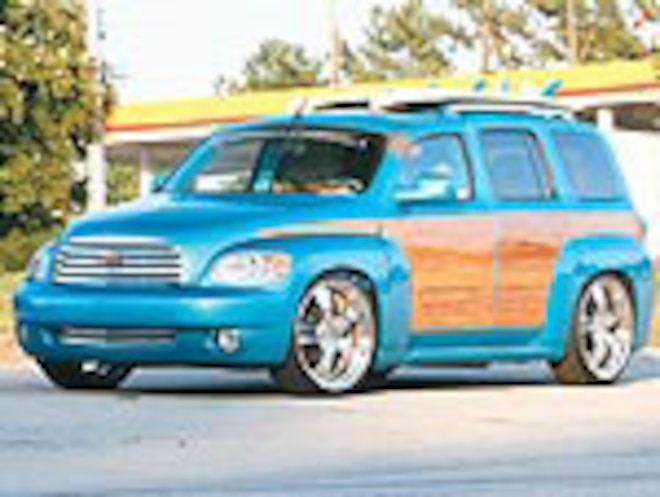 Godfather Customs turns out large amounts of aftermarket parts and accessories under the watchful eye of owner Hal Johnson. Less well known are Godfather's customized rides, which seem to pop up like weeds every time you turn around. Watchful readers will know we have featured a few in this magazine-several even making on our cover-and here we are again. 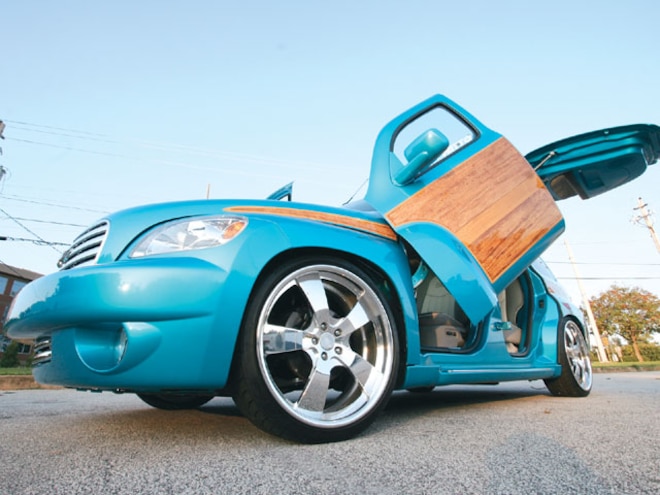 View Photo Gallery | 12 Photos
Photo 5/12   |   chevrolet Hhr drivers Side View
At SEMA 2005 Hal had a prestigious spot in the Primedia booth and was handed the GM Design Award for his customizing efforts. Right then and there we knew this HHR had to be featured so everybody could check out what Hal and Godfather's was capable of.
To begin the build, the Godfather crew got to work by pulling parts from the inventory in their massive facility. The crew brought the HHR down a bit with Intrax springs to close the gap on the 20-inch Bonspeed Huntington wheels enveloped by 225/30R20 Nitto Neo Gen rubber. To roll the package down the road a bit more authoritatively, the inline four-cylinder was augmented with a CGS Motorsports cold air intake. A stainless Gibson after-cat exhaust makes the four-cylinder HHR sound tough. 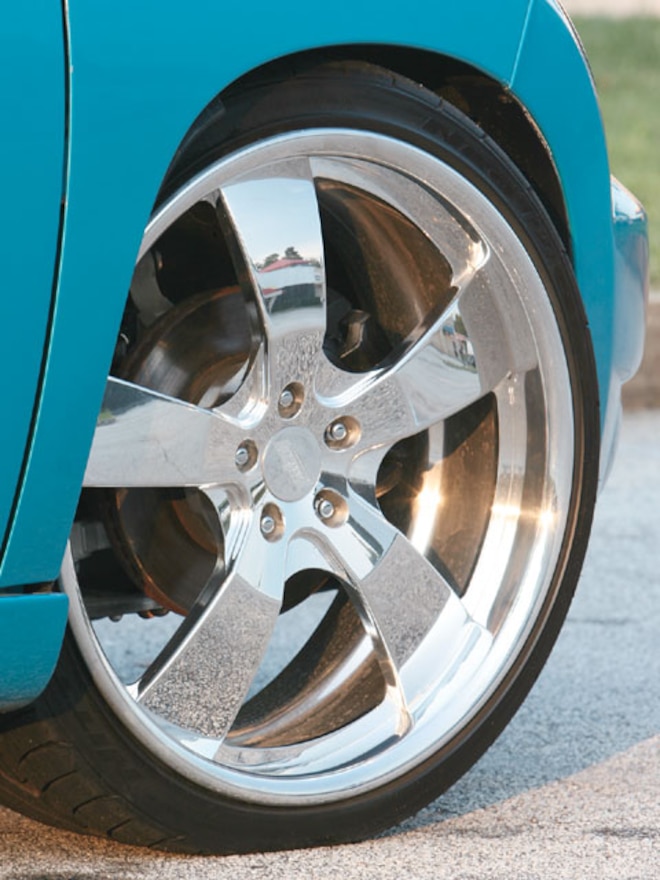 View Photo Gallery | 12 Photos
Photo 6/12   |   chevrolet Hhr custom Wheel
Obviously, the HHR's performance isn't its selling point-but the exterior certainly is. To add some flash to this retro beach cruiser, AutoLoc equipment was used to convert the front doors to vertical opening and the rear doors to gullwing. On the rear, the stock vertical opening hatch was converted to swing barn-door-style before being shaved of its license plate opening. The plate mount was moved to the rear bumper for a smother external view. Additionally, the door handles all the way around were shaved as well. Ryno Mfg. fabricated custom running boards for the project before Larry West, of West Signs, custom mixed a batch of House of Kolor's finest fluids to create the eye-catching color strewn about the Chevy's skin. Larry is also credited with the intense wood grain treatment to offset the blinding HoK coating.
Adrian at Auto Formz gathered his wood and fiberglass supplies to form the HHR's internal subwoofer enclosure taking up space in the rear cargo compartment. Additional 'glass work adorns the dash and all the interior's plastics were smoothed and painted to match the outer hues. A Kenwood head unit feeds the all-Kenwood audio and video extravaganza fit into every point of the HHR's internals. Keeping road noise from interrupting the music, Hush Mat is hidden beneath and behind all of the interior panels. Ted with Gibbs Upholstery displayed his talents by stitching suede into the headliner and recovering the mini SUV's seating surfaces with Katzkin's leather. A Colorado Custom classically styled steering wheel fits the theme just perfect. On the floor are coco floor mats by DM that complement more of West Sign's faux wood and create the illusion of a real woody.