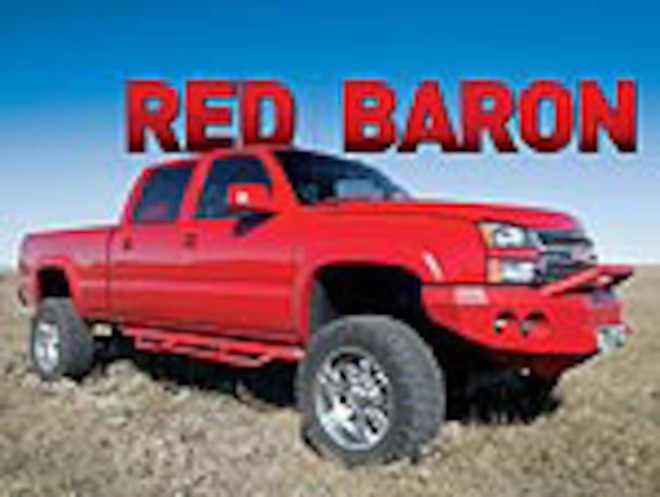 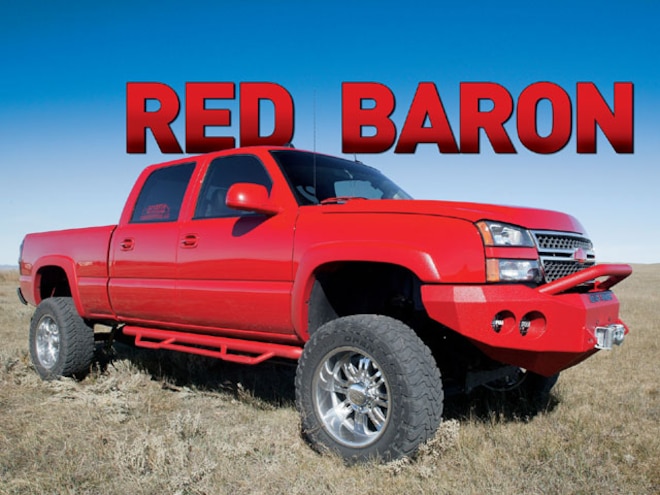 View Photo Gallery | 10 Photos
Photo 2/10   |   The '05 Chevy came with a chrome bumper and black fender flares from the factory. However, Darrin had these parts color-matched with Ultimate Lining for a monochromatic look.
If you like the look of the truck shown here, you are not alone. Darrin Howie has built three previous trucks only to sell them to complete strangers who asked him to name his price. This '05 Chevy 2500HD Crew Cab Duramax is his latest creation. Darrin bought the truck from Queen City Motors in Spearfish, South Dakota, after telling them exactly what he had planned for the Duramax engine, Allison transmission, and suspension. "They said they would have no problem honoring my warranty," Darrin reported. Lucky him.
Power-Adders
From the dealership, the truck was taken directly to Rapid Diesel, where a host of performance parts were added to the LLY Duramax engine. Breathing was improved with an AFE Stage 2 intake, BD Power full-bore driver-side exhaust manifold, and Bully Dog 4-inch stainless steel exhaust. The power was further increased with the use of a Bully Dog Power Pup downloader and TS Performance Max Power box. The stacked combination has registered 450 hp and 830 lb-ft of torque on Rapid Diesel's Mustang dyno.
A host of other products were added as a margin of safety and to monitor the increased power. Black-faced Bully Dog gauges are mounted in the A-pillar in an Autometer gauge pod to display boost and EGT. A TS Performance MPD monitor with heads-up display was recently fitted in the center stack under the factory stereo. A Stanadyne Fuel Manager utilizing a huge filter was installed to keep water out of the fuel supply, and a BD Power cool-down timer ensures that oil does not coke in the hot turbo after particularly spirited driving sessions. Kennedy Diesel's EGR blocker plate and boost stick keep the ECM from throwing codes with the host of modifications.
Suspension Lift
After picking the truck up from Rapid Diesel, Darrin took it home and immediately installed a 6-inch Race Car Dynamics (RCD) suspension lift. Bilstein 5100 series shocks were utilized with the lift to smooth out the bumps, and Genuine Steel nerf bars ensure that all family members can still access the cab.
Off-Road Wheels, Tires, and WinchThe added altitude made room for 20x10 American Eagle 114 rims wearing 35-inch Toyo Open Country M/Ts. The aggressive tires are E-load-range rated to handle the heavy loads frequently found hitched to the big red machine. Other than the tires and rims, the biggest visual impact comes from the Road Armor front bumper that is fitted with a Tabor 12,000-pound winch and PIAA auxiliary lights.
Exterior Armor
The bumper, fender flares, nerf bars, and bed were all covered in color-matched red Ultimate Lining for a monochromatic effect. The bedlining is for more than just show, however, as this truck is used daily by Darrin for construction work. Much of the 45,000 miles logged by the Chevy were covered with a load of concrete in the bed, a Bobcat tractor in tow, or pulling a trailer full of dirt bikes to weekend races. All of that towing and power are taking their toll on the stock transmission and torque converter, which began to slip shortly before our photoshoot. Darrin plans to remedy the problems with a billet torque converter from BD Power and Rapid Diesel custom Allison transmission upgrades. That is, unless another stranger writes him a check for his truck before Darrin gets it into the shop..