Not Quite A Semi, But Closer To It Than Most 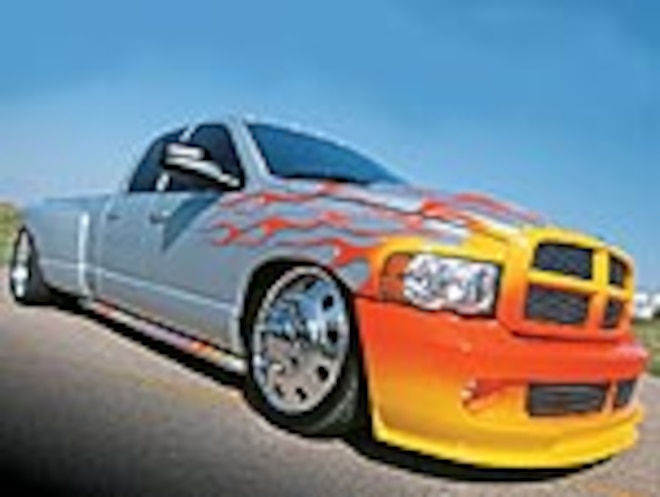 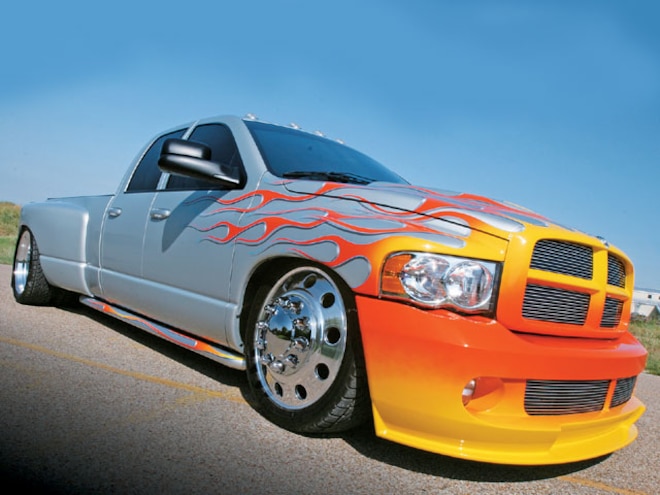 View Photo Gallery | 11 Photos
Photo 2/11   |   When I went to buy this truck, the salesman liked my old truck so much that after the dealership traded it in, he make some cuts and purchased it from them. -Chris Dybala
From as far back as Chris Dybala can remember, he was always getting his hands dirty while helping his uncles' work on their cars. They owned musclecars and were always working on them or customizing them. Once he made it into high school, he took automotive tech as his elective class. With that taste of working on vehicles, he set his sights on doing automotive work for a living. Chris found out about this automotive repair shop in his hometown. He started to work there to earn himself some cash while in school. Rather than going on to a tech school to earn money later, Chris decided to keep on making money at the shop when he graduated high school.
After all of the hard work, Chris went on to become manager and later wound up buying the business from the previous owner. After that, he made some changes and renamed the shop to Dybala Auto Repair & Custom. Instead of getting his hands dirty, Chris decided to do more custom stuff rather than mechanical repairs, which gave him an excuse to work on his own rides. 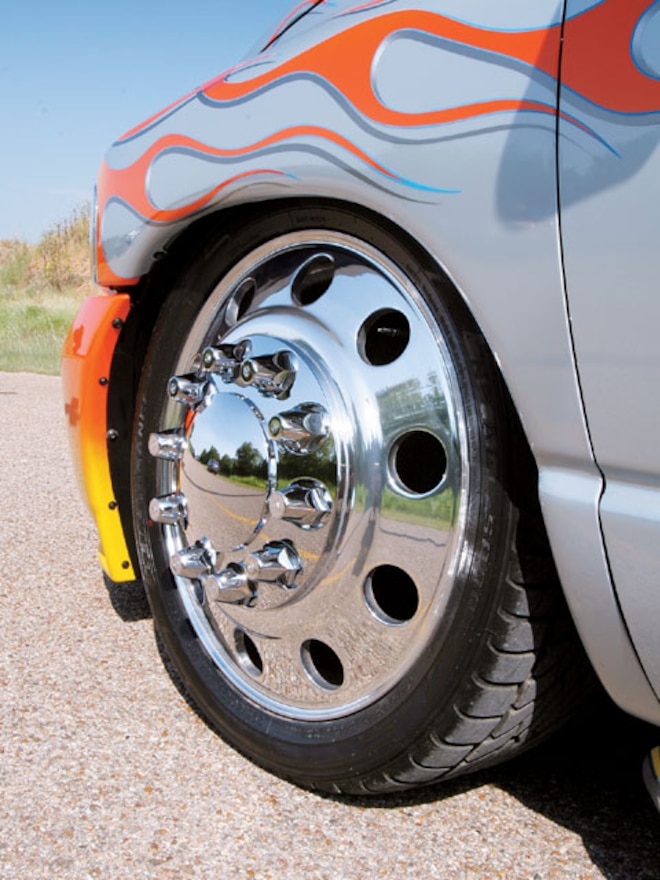 View Photo Gallery | 11 Photos
Photo 3/11   |   2004 Dodge Ram 3500 Dualie front Wheel
Because trucks are stylish and can be used in many ways, his first weapon of choice was a Ford Lightning. Chris had it blacked out, lowered, and pulled 450 horses out of it. It was show-quality and his prized vehicle until he saw a newer Dodge dualie with semi-truck wheels on it. It captured his attention because the truck had more of an 18-wheeler look than the everyday driver it was. Instantly, Chris was inclined to stop over by the local Dodge dealership to inquire about the new Ram dualie. The salesman was so impressed by Chris' Lightning he worked up a deal to sell Chris the dualie. Then, the sales guy bought Chris' Ford.
Chris had his new toy and a plan to make the truck look more like a semi. Since Alcoa wheels are mainly used on 18-wheelers and also spell out the big truck style, Chris ordered a set of six 22-inch wheels. To fit the 10-lug wheels on the eight-lug hubs of the Ram, Chris ordered a set of adapters. Then, to be cool, it needed to be low, and that's when an order to Chassis Tech solved the problem. The frontend uses upper and lower control arms, and in the rear you'll find a modified '02 Ram four-link kit with 2,600-pound Firestone 'bags to get the truck down. 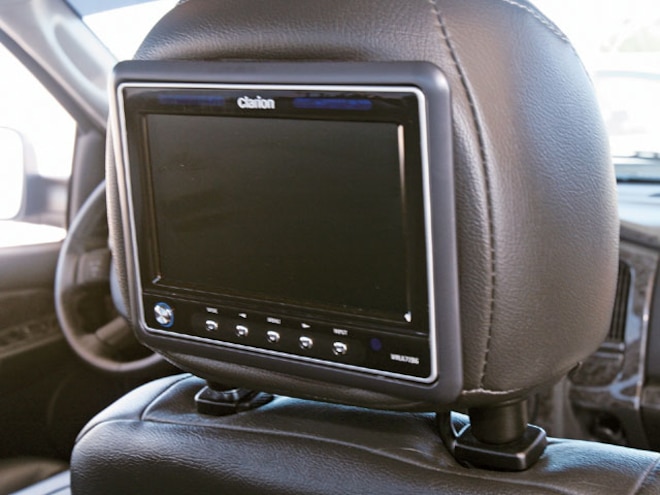 View Photo Gallery | 11 Photos
Photo 4/11   |   2004 Dodge Ram 3500 Dualie interior Headrest Screen
With the air-ride system installed, Chris realized that in order to get the truck down, the wheels needed to tuck behind the fenders. The front stock spacers were shortened 2 inches for the wheels to tuck. But, at the rear, this fix would not work. The only solution was for Chris to cut and extend the dualie fenders for the big wheels. Since the fenders were mocked-up versions and were not too stable, Chris had John Jorewicz of Miffco made new fiberglass versions on the modified fenders. John does a lot of fiberglass work for boats, and these fenders were right up his alley. A mold was made from the modified originals, and then fiberglass was applied to the mold for these clean new fenders.
Since those fenders needed to be painted, Chris purchased a few more things to accessorize the exterior. The front got a face-lift with an SRT-10 bumper and hood to match. Then, the rear got an SRT-10 bumper that was re-worked at the sides to fit with the new fenders. The door handles were swapped out for Jeep Grand Cherokee handles because they were easier to paint. Then, the truck was sent out to the painter to be color-matched with a new flame job. During that time, the truck was down for paint and Chris bought a new set of 24-inch Alcoa wheels to make the truck seem more like a semi.
To finish the truck, a few interior and engine mods were performed. When we photographed the truck, it only had the stock turbo connected to the 5.9L Cummins turbodiesel motor. Since then, Chris has added a B&D Diesel twin-turbo kit that puts out 65 pounds of boost, which makes for an estimated 600 hp and 1,200 lb-ft of torque. What else could you ask for in a truck? It looks beefy, aired out over 24s, and is powerful enough to haul some big loads.
THE 411 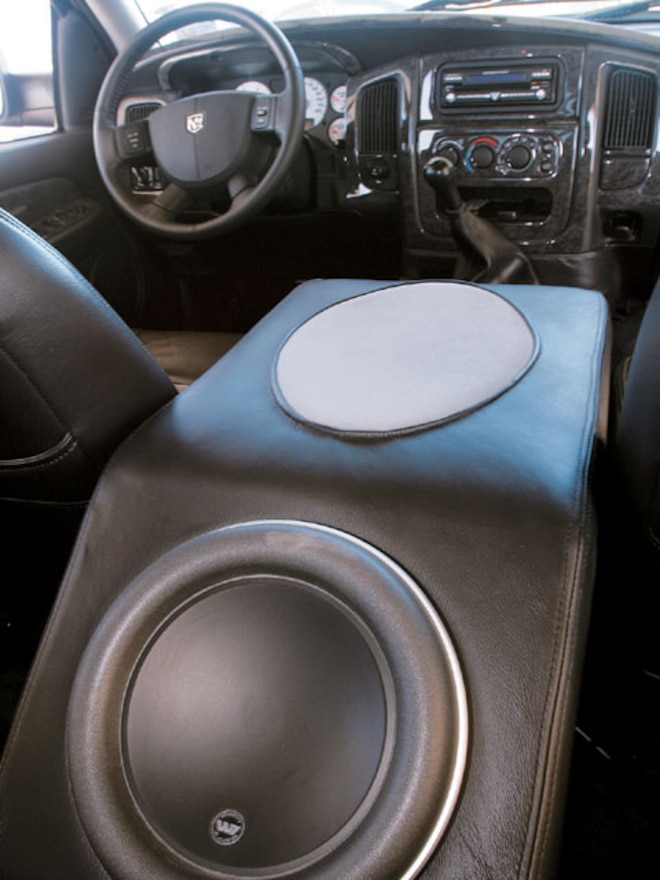 View Photo Gallery | 11 Photos
Photo 11/11   |   2004 Dodge Ram 3500 Dualie interior Subwoofer
Audio/Video:
Phase Linear UDV9010 head unit with 7-inch flip-screen / stock mids and highs / JL Audio 10-inch W7 sub / Sony 800 amp / two 7-inch Clarion monitors in back of headrests
By: Chris Dybala
Club:
N/A
Special Thanks:
Bruce "Nutz" Myhre; John Jorewicz of Miffco; Kevin Shores of Wax Express; Bernie of Chromewheel.com; his wife, Amy, for being understanding when he spent money on his toys; and his crew at the shop for getting work done when he worked on the truck.