From the Diesel Dark Ages 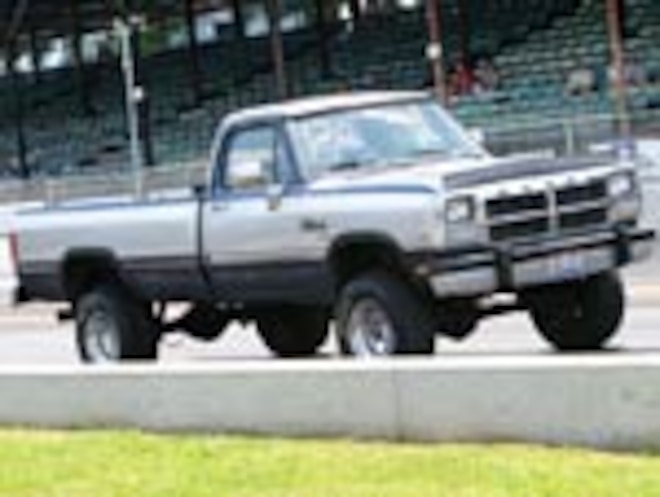 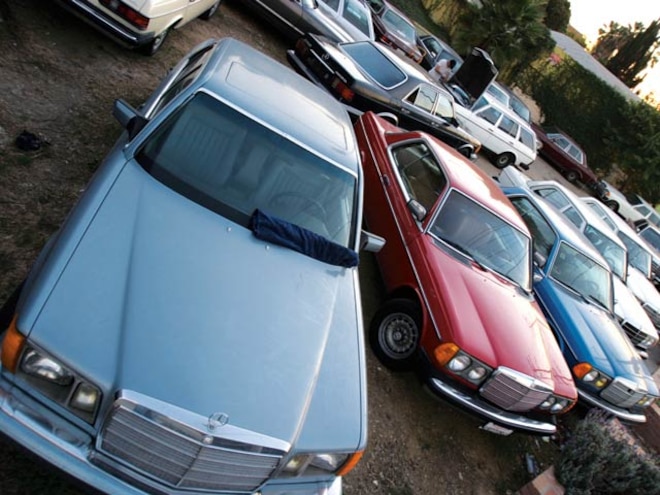 View Photo Gallery | 10 Photos
Photo 2/10   |   1980s Diesel Vehicles mercedes Diesels
Diesels have not always been synonymous with the word "power." Back in the 1980s, diesels were explored by many automakers as an alternate powerplant for their production vehicles. In fact, in 1985 there were more than 70 different models you could buy with a diesel engine, almost half of them manufactured by GM. Sadly, the age of the performance diesel was a long way off, and many of these cars and trucks had trouble even getting up to freeway speeds. Very few were turbocharged, and those that were still didn't come close to equaling the power of their gas counterparts.
So diesel sales were slow for many models (especially passenger cars) and even the ones that did sell relatively well (such as the GM sedans) had reliability problems. That, combined with their painfully slow acceleration, led buyers away from diesels. The gas mileage was still great with these vehicles, and diesel trucks that were made by Chevy, Dodge, and Ford during this time were all used as reliable workhorses rather successfully. The success of the trucks led to the more powerful versions we have today, while the slow sedan sales effectively closed the diesel car market for many years to come.
The good news about diesels built during the 1980s is that they can now be had for a very reasonable price. Not only that, but there were some diesel car exceptions, such as the VW Rabbit and Mercedes-Benz sedans, that were sold in great numbers and were very reliable. Many are on the road with 200,000 miles or more, and parts are still plentiful. With ever-rising gas prices and the newfound popularity of biodiesel and SVO (straight vegetable oil), the price of some of these older cars is actually on the rise! There are still low-mileage trucks out there too, and most can be had for about one-tenth the price of a new diesel pickup, while still having plenty of service miles left. So without further ado, here are the top-10 best, most-influential, and most interesting diesels of the 1980s.

View Photo Gallery | 10 Photos
Photo 3/10   |   First-generation Dodges are actually considered "classics" by the diesel community, and many are well-kept and tastefully modified.
The '89 Dodge Ram laid the foundation for diesel truck performance for decades to come. It was the first Ram to come with the legendary 5.9L Cummins engine, and the motor was virtually the same internally as the later models. Mileage was in the 20-mpg range on the highway and its power and reliability were good, although these non-intercooled trucks lack the performance potential of some of the later models. One of the most important parts of the Ram is that it had a relatively large engine, combined with turbocharging, which would be the successful combination for diesel trucks into the 1990s and beyond.

View Photo Gallery | 10 Photos
Photo 4/10   |   Believe it or not, searching for diesels (any year) on www.craigslist.org brought up more Mercedes diesels than any other make or model. There are still many around and in good shape, and 200,000 miles is considered pretty low for these cars. Vegetable-oil conversions are also easy with these early M-Bs.
Perhaps the most well-known vehicles of this era, the Mercedes-Benz 240 and 300 turbodiesels, could be two of the more common vehicles still around from the mid to early 1980s-diesel or otherwise. The engines had enough power because of turbocharging (approximately 120 hp), and the engines found in these cars are also some of the most forgiving-running on diesel, biodiesel, or even SVO! In fact, the fuel flexibility and reliability of these Mercedes have led to theiir prices almost doubling in the last few years. Many of these cars were also pampered early in their life, leading to them being in relatively good shape today. If you are looking for a diesel car, the options from Mercedes-Benz are hard to beat.
One of the most popular mini trucks of the 1970s, the Chevy Luv got diesel power in the early 1980s along with its brother vehicle, the Isuzu Pup. The phrase "diesel power" indicates the type of fuel, and in no way should be confused with performance; at a whopping 58 hp, these trucks were in no way fast but were reliable and got the best mileage of almost anything out there. Thirty-five to 38 mpg highway was not uncommon for these little trucks.

View Photo Gallery | 10 Photos
Photo 5/10   |   VW Rabbits are still some of the most prolific diesels around from the 1980s, and they got some of the best gas mileage too! Forty-plus mpg was not uncommon for these cars, and some were even turbocharged.
Next to the Mercedes, perhaps the most common 1980s diesel car is the Volkswagen Rabbit/Golf/Caddy. The Caddy is the Rabbit-looking pickup that was available from VW in the early 1980s. Volkswagens are known as being very reliable, having parts that are easy to source, and often cost half of what you might pay for another make. All of these trends can also be applied to the diesels of this era. Volkswagen might also be the mileage champ of the era, with some owners claiming 50-plus mpg!
One of the most interesting stories from '80s-era diesels has to come from the '84-'85 Lincoln Mark VII. In an effort to meld American comfort with European refinement, Lincoln offered a 115hp 2.4L six-cylinder turbodiesel that was actually manufactured by BMW. It was also offered in the Continental as an option, but very few (numbering in the hundreds) of these vehicles were sold. Undoubtedly, the near 2-ton weight of the Lincoln was probably a contributing factor to low sales-acceleration would have been sundial slow. Interestingly enough, this car may have been 20 years ahead of its time; in Europe, many carmakers now use diesel torque to get heavier luxury cars to perform better.

View Photo Gallery | 10 Photos
Photo 6/10   |   Diesel Suburbans and pickups are still around these days and many are being lifted and modified for off-road trail use, where big horsepower is not always needed. Proper suspension travel and gearing are key.
Perhaps the most common and noticeable diesel truck of the era was made by Chevrolet. The pickup trucks, Blazers, Vans, and Suburbans all came with an optional 130hp 6.2L diesel option that was also available in GMC pickups and SUVs. Aside from the Ram, this is one of the few diesels of the era that has performance parts available. These vehicles also benefit from a huge aftermarket; everything from lift kits to complete reproduction interiors can be had, making them a good choice for building a cool-looking ride. For more performance, there are turbo kits available that can give a 40-plus horsepower increase, and some have even chosen to swap a Cummins 5.9L in to give them the necessary power.
Nope, it's not a Cor-vette, rather a Che-vette. The Chevy Chevette may not have looked or performed like a Corvette, but it might interest you to know that some were also oil-burners instead of gas-burners. Perhaps the most made-fun-of car from the 1980s should have deserved a little more attention with 40-plus mpg combined with a 1.8L diesel option. Another car ahead of its time, now ultra-mpg cars that are on the drawing board are also looking toward diesel technology.

View Photo Gallery | 10 Photos
Photo 7/10   |   Chevrolet was a major player in the '80s diesel market. The 6.2L (pictured) was one of the best of the era as long as horsepower wasn't something that was needed. Unfortunately, the horrible reputation of the 5.7L diesel engine found in GM cars overshadowed some of the better diesels built by GM.
GM was deeply into diesels in the mid-1980s and, unfortunately, had not embraced turbocharging for any type of performance. The Chevy Celebrity, Caprice, and Impala all came with either a 4.3L six-cylinder or a 5.7L V-8 for the bigger cars, both diesels. The same engines were also used in the Buick, Cadillac, Oldsmobile, and Pontiac lineups-with so many vehicles made by GM, there are still a decent amount of them out there. Despite being the same size as a 350-cid gas engine, they only produced 105 hp and were known to be unreliable. One note of interest is that so many of these cars were later equipped with hot-rodded gas V-8s (350 small-blocks and 454 big-blocks are almost direct bolt-ins) that the California smog book mentions these cars specifically in its diesel-to-gas conversion laws.
One of the best workhorse trucks of the 1980s was a diesel made by Ford. Ford teamed up with International to put in a 6.9L and later the more common and popular 7.3L engine, which can be found in '88-and-later models.

View Photo Gallery | 10 Photos
Photo 8/10   |   Thousands of F-250s and F-350s are still around from the 1980s and most are still being used as work trucks.
These trucks were very reliable and surprisingly powerful for non-turbocharged engines, coming in at 170 hp and 180 hp, respectively. There are also turbo kits available that can increase horsepower at the crank to over 300 hp. These older trucks do sometimes have starting and idling problems, but the good news is if anything does break, it's usually a cheap fix. If you are on a shoestring budget and are looking to tow something (or looking for a ranch truck), these early Fords are hard to beat.
In the mid-1980s, when Volvo took the diesel from its 240 model and put it in the 740/760 class cars, the company created the "hot rod" of the mid-1980s diesel world. To give an idea of how slow diesels of the era were, the Volvo had a 0-60 time of about 13 seconds, and it was considered one of the fastest production diesels in existence! Unfortunately for the diesel, the turbocharged gas model was decent on gas and surprisingly fast, going 0-60 mph in a little over 7 seconds, with quarter-mile times in the mid 15 seconds. The good news is that there are a lot of gas Volvos out there, and most non-drivetrain parts can interchange. If we were shopping for a diesel car, however, we would still opt for the more common VWs and Mercedes.