Tow, Show, and Go All In One 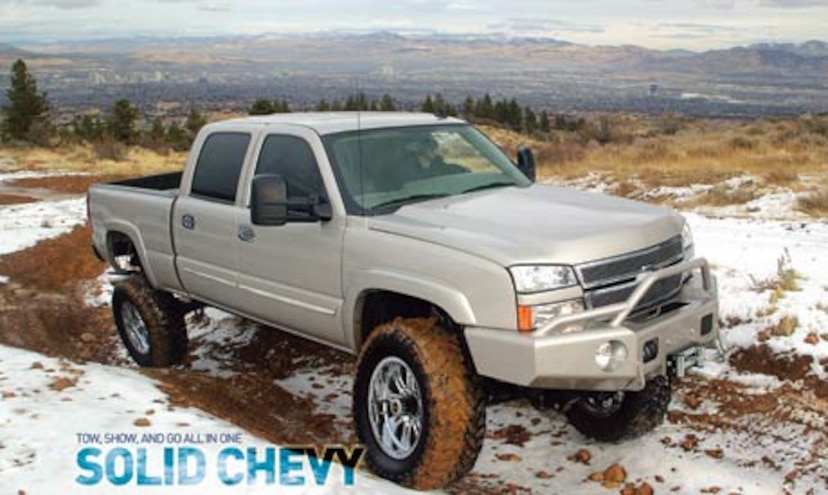 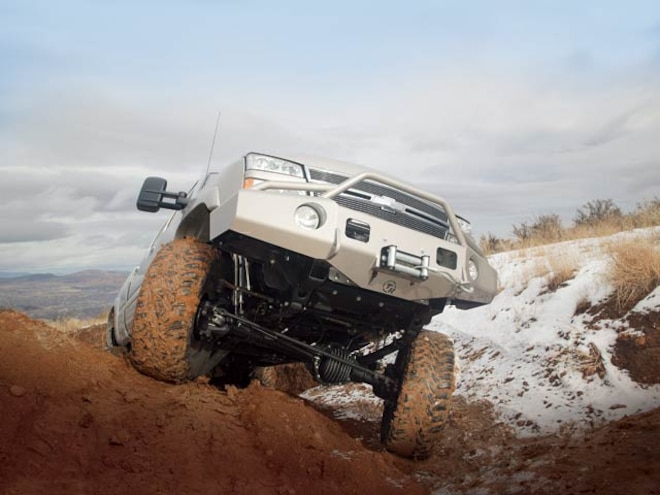 View Photo Gallery | 12 Photos
Photo 2/12   |   The Dynatrac Dana 60 front axle is stronger than the factory independent front suspension and allows the use of more robust steering components as well. Jack Stanko has built lifted IFS Chevys in the past and found they were not strong enough to endure the punishment he subjected them to.
Jack Stanko believes that General Motors makes the best diesel truck available. Many people agree with him, thanks to class-leading power, a stout Allison six-speed automatic transmission, and arguably the nicest interior available in a 3/4- or 1-ton truck. The GMs do have an Achilles' heel, however-the dreaded independent front suspension. Sure, it's great if you want to drive your truck to church on Sundays or toss the keys to granny so she can take your oil-burner to the store for some sugar, but it's not nearly as beefy as the Dana 60 solid front axle offered under the front of new Fords and Dodges.
The ring gear on the Dana 60 is a 1/2-inch larger than the IFS frontend, and the U-joints on the solid axle only have to account for turning, while the CV joints in the IFS must accommodate up and down motion of the suspension in addition to left and right turning motion. The steering on the solid front axle is much stronger than the IFS as well, using larger, thicker tubing for the steering links and larger tie-rod ends. By now, it should be easy to see where this is going. 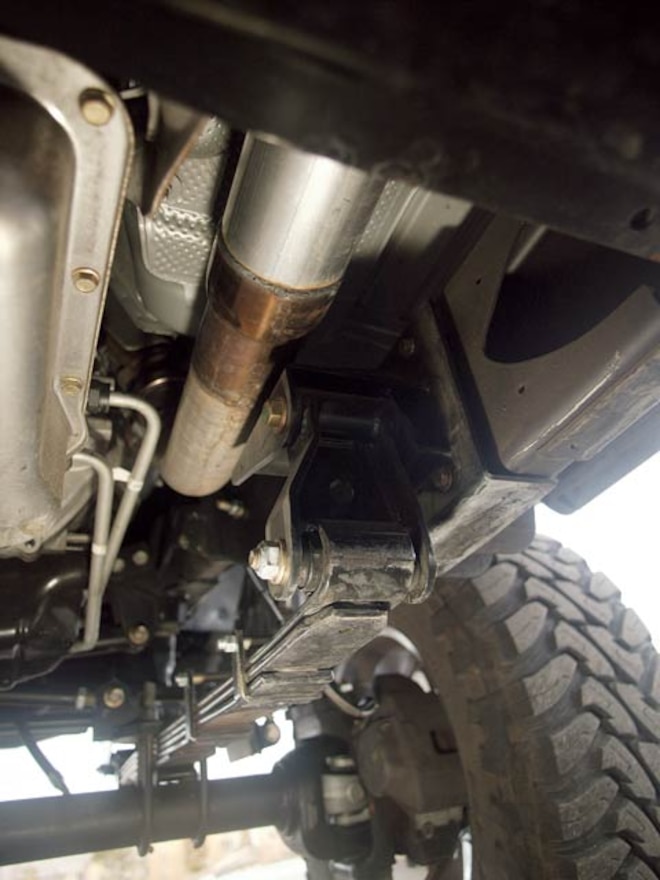 View Photo Gallery | 12 Photos
Photo 3/12   |   The front shackle is mounted inboard of the frame. The narrower spring perch width keeps the tires from rubbing the springs at full steering lock.
Jack was tired of breaking the IFS frontends under his past Chevy trucks, so he ordered up a solid axle conversion kit from Off Road Unlimited for his '06 Duramax-equipped 2500 crew cab shortbed. The IFS was then removed by Jack and his friend, Nate Jensen. New leaf spring and shock hangers were hung to hold Atlas leaf springs and dual Bilstein 7100 series remote reservoir shocks. The rear was similarly raised with Atlas springs and Bilstein shocks. The new suspension provided about 8 inches of lift, which made plenty of room for 37x13.5R20 Toyo Open Country M/Ts mounted on 20x10 Weld Velociti rims.
Steering duties for the big meats are handled by an Off Road Unlimited hydraulic ram that is plumbed to an Off Road Unlimited stock steering box. The tie rod and drag link from Off Road Unlimited also connect the steering box to the front Dana 60. The Dana 60 axle was sourced from Dynatrac and built to ORU's specifications to match the rear axle and driver-side drop of the factory transfer case. The front axle was stuffed with 4.56 gears and an ARB Air Locker, while the AAM 11 1/2-inch 14-bolt rear received matching gears. When the suspension articulation and locker aren't enough on the trail, Stanko can rely on his Warn 16.5ti winch mounted on the front TrailReady bumper.
Other than the suspension modifications, the truck is relatively stock. Behind the Duramax, the stock six-speed Allison automatic routes power to the factory electronically shifted NVG263 transfer case. The only necessary change was a new long-travel front driveshaft from Reno Driveline Service and Gear to mate to the solid front axle. A custom 4-inch exhaust from Mr. Z's in Reno, Nevada, is the only modification that was done to the LBZ engine. As we noted above, the Chevy is not lacking in the power department. With 650 lb-ft of torque from the factory, the only thing the Chevy gives up to Ford and Dodge is the front axle, and Jack Stanko has that little problem solved.

- OF
By Harry Wagner
43 Articles