A More Sensible Powerplant Makes The Hummer A Sweet Ride 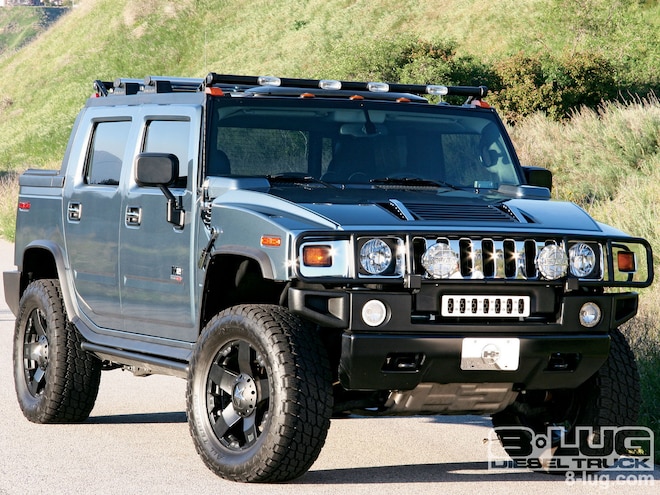 If you're reading this magazine, it's a sign that you're pretty sold on diesel as a fuel source for your ride. So is Daryl Alison. But he liked a lot of what the HUMMER H2 SUT had to offer: comfort, go-anywhere attitude, the fun-to-drive quotient, and more. He just didn't enjoy filling up at the gas station and was tired of showing up at the lake last in his group of friends because he had trouble making some of the steeper grades. He wanted to make what he thought would be a pretty straightforward swap to a Duramax diesel engine and an Allison transmission.
View Photo Gallery | 13 Photos
Photo 2/13   |   Like the H2 Hummer? You'll like it a lot more with a Duramax diesel engine under the hood.
Daryl took his then practically brand-new, highly optioned (navigation, air-ride suspension, factory-installed moonroof, and so on) '05 slate-blue-metallic Hummer H2 SUT to a shop, and they assured him it would be quick and easy. After securing an LLY 6.6L Duramax with only 1,000 miles on it, the conversion was started with no expense spared. Daryl would've liked to spare a few expenses, for sure; it's just that the shop didn't feel like it. After being jacked around by the man Daryl refers to as a "con man," he pulled the truck back out of the shop and was determined not to let it happen again.
After extensive research on the Internet, he discovered that most companies that advertise conversions actually outsource the work. "A lot of them talk as if they are well-versed in the whole diesel-conversion process, but thanks to my experience, I was able to read through the BS," Daryl says. "I realized that most of these guys were just a bunch of talk, and none of them had a conversion in process that I could actually see being performed-or even one that was completed.
"Finally, I got in touch with some friends who work at General Motors, and they referred me to a gentleman in Kansas named Jonathan Goodwin from Goodwin Customs [316/650-8516]. They specialize in HUMMER H1 and H2 conversions and have extensive experience in the Duramax-conversion process. Thank God for these guys! They actually did everything they said they would do and had it done in a week."
The Hummer was completely reconverted the way it should've been done in the first place. The entire body was lifted off the frame, and everything from the fuel tank to the radiator was replaced to complete this massive conversion. Best of all, the H2 is now part-time 4WD instead of the original full-time. Everything works, even the OnStar, with no check-engine lights and no issues.
When 8-Lug Diesel Truck got the opportunity to drive the H2, it already had more than 1,000 miles on it, and we were impressed with the big vehicle's monster acceleration. The Duramax made it a completely different kind of truck.
The Hummer was also fitted with roof-mounted, front- and rear-facing XTC light bars that were retrofitted with PIAA High Intensity lights and a brush bar that has PIAA floodlights. AMP Research electric-retracting running boards were specially designed for the H2 series. KMC XD Rock Star 20-inch, satin-black wheels were fitted with LT325/60R-20 Nitto Terra Grappler All-Terrain tires, which contribute to the H2's tough look.
And, as if the Duramax engine alone weren't enough, Goodwin Customs also installed an Edge Juice system that boosts the power up to 550 hp and an impressive 18 mpg. Want something just like this? Maybe Daryl can be convinced to sell the H2 at some point; he's got a few other projects he'd like to get done. Give him a call at 714/624-6956.