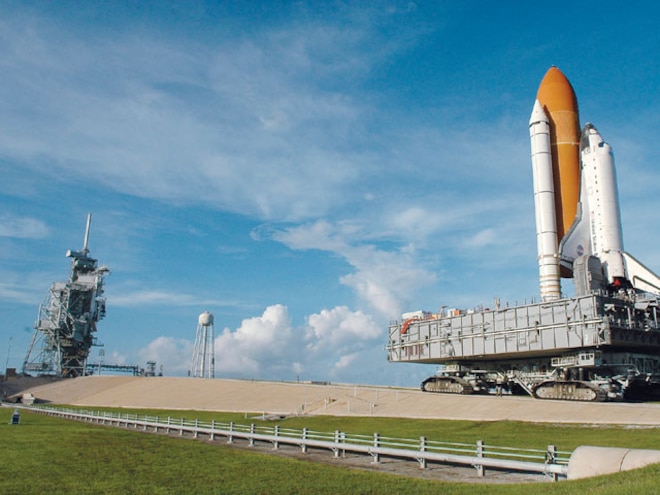 View Photo Gallery | 16 Photos
Photo 2/16   |   nasa Diesel Shuttle Crawler base
Some of the largest vehicles on earth are diesels. Earth-moving equipment, ocean liners, freight trains-all are diesel-powered. It should come as no surprise then that the largest self-propelled land vehicle in existence is powered by, you guessed it, diesel engines-a title the NASA Crawlers have held for 40 years.
There are actually two Crawlers, one nicknamed Hans, the other, Franz. Both Crawlers were designed by Bucyrus International and built for NASA by the Marion Power Shovel Co. The Crawlers were initially built during the days of the Apollo program and were delivered in 1965-they are now used to take the space shuttle and mobile launch platform to one of the two actual launch sites. The Crawlers are aptly named (Hans and Franz don't exactly sound very nimble), traveling at a maximum loaded speed of about 0.9 mph. 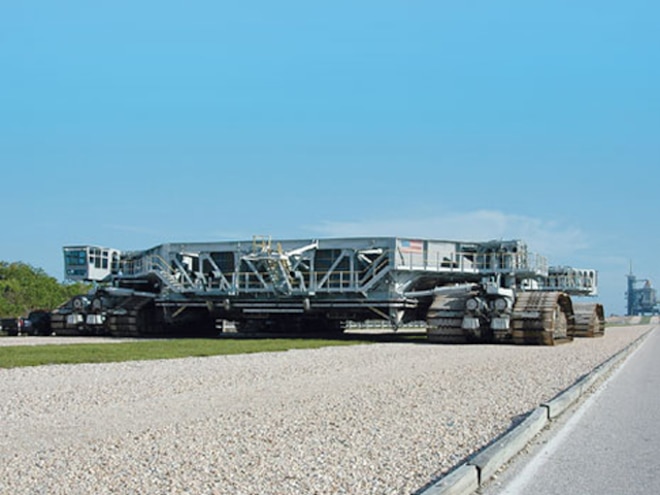 View Photo Gallery | 16 Photos
Photo 3/16   |   nasa Diesel Shuttle Crawler test Base
Let's talk about payload capacity for a second. Your new Chevy, Dodge, or Ford diesels come in at about a 4,000-6,000-pound payload capacity for whatever you're hauling. Unfortunately, the shuttle and launch pad combine for about 12.6 million pounds, leaving the family rig just a little bit short. The Crawlers were built to handle this massive problem, and the solution was equally massive. A Crawler weighs about 5.5 million pounds by itself, which is part of the reason it has to go so slowly. Even unloaded, its maximum speed is a blazing 2 mph. The platform on top of the Crawler where it connects to the launch pad is a 90-foot square (about the same size as the infield on a baseball field), and with the shuttle on top, the Crawler is more than 40 stories high-taller than most skyscrapers.
Everything is massive on the Crawler, and diesel powers it all. There are four diesels: two engines are used for jacking, steering, lighting, and ventilation and two are used for the drive system. Total horsepower comes in at more than 7,500 for all engines combined. The drive system is a combination of 16 electric motors, with two 2,750hp Alco diesel engines used to power four 1,000-kW generators. Two more 1,065hp diesels are used for jacking, steering, lighting and ventilation. Even with all that power on tap, it still only takes one person to drive.
What is it like to drive? Ask Bob Myers, who has been driving and caring for the Crawlers for more than 20 years. Myers says, "When you're walking on the ground, of course, at 1 mile an hour, you can outwalk the Crawler in a heartbeat. But when you have 18 million pounds, and you're up in the cab, and it's moving 1 mile an hour, it seems fairly fast."
So much for acceleration, what about handling? Myers laughs when asked how the Crawlers "handle" on a drive. "How about really slow?" he replies. But Myers explains that there's really no better way to train for driving a Crawler than through hands-on experience. "It takes some time to learn how to get out on the Crawlerway and learn how to anticipate a turn-to keep the Crawler straight-and learn how it's going to accelerate, decelerate, and stop."
The Crawlers have been trudging along for more than 40 years, racking up thousands of miles on the 4-mile drive to the launch pad-which, by the way, can be done in about a day. The Crawlers still remain Earth's largest self-propelled vehicles, doing their job carrying the most powerful vehicle-the 27-million-horsepower space shuttle-to the launch site.
* The overall length and width of the Crawler is 131 by 113 feet.
* The Crawler burns a gallon of diesel every 42 feet, or gets about 0.008 mpg.
* The water pump is a 75hp electric motor, and the cooling system holds 500 gallons.
* The Crawler has six mufflers, the heaviest coming in at more than 3,000 pounds.
* Two eight-cylinder White-Superior 1,065hp motors are used just for electric and hydraulic power.
* For power, the Crawler uses two 2,750hp, 16-cylinder Alco diesel engines to power sixteen 375hp electric motors.
* Just the Crawler itself, without the Shuttle, is still three stories high.
* Each track (or shoe) on the Crawler weighs 2,200 pounds-and there are 456 of them.
* The Crawler's fuel tank will hold 5,000 gallons, giving it a range of about 40 miles.
* The Crawler is wide enough to take up an entire four-lane freeway-all lanes in both directions.
* The instruction manual on how to start and warm up the Crawler is 39 pages.
* Although there are up to 30 people monitoring various systems, the Crawler can actually be driven by just one person.
* There is a speedometer on the Crawler-from 0-2 mph.
* From the vertical assembly building to the launch platform is a little more than 4 miles. The Crawler can make it in about a day.
* The Crawler's drive system (think rear axle ratio) has a gear ratio of 168:1.
* The Crawler has to tilt the 12-million-pound shuttle and platform at up to 5 degrees to keep it perfectly level on the way to the platform.
* A Crawler can move the slightest distance (for example, only 1/8-inch) if it needs to.
* Both Crawlers, combined, have traveled thousands of miles since being built.

View Photo Gallery | 16 Photos
Photo 16/16   |   nasa Diesel Shuttle Crawler bagger 288 Excavator
Those of you who are on the Internet or watch the Discovery Channel are no doubt wondering, Wait, isn't the Bagger 288 excavator bigger? Well, yes and no. The Bagger 288 excavator was made when it was found that the most cost-effective way to strip-mine on a huge scale was to actually move the mine to various locations. Thus, the world's largest tracked vehicle was born. Is the Bagger bigger? Yes, it comes in at 151 feet wide, 792 feet long, and 316 feet high. It's also heavier, coming in at 27 million pounds. The problem in classification comes from the power source. The excavator itself requires 16 megawatts of electricity to operate (enough to power a town), from an externally supplied source. In a direct comparison, the Crawler wins only in height (at 451 feet with the shuttle on top), but the Bagger isn't going anywhere without its electricity. The Crawler can fill up on #2 Diesel and go-well, at least move on its own. Technically, the Crawler is still the biggest self-propelled vehicle on Earth, while the Bagger 288 (and its twin, the Bagger 289) are the largest movable vehicles on Earth.