Drag Trucks Are On The Move

Diesel drag racing will be in a whole new performance realm within the next couple of years. How do we know? Well, just take a look at some of the projects that are under construction. Whether they're made for the street or made for the racetrack, diesel drag trucks are spooling up into the mainstream.
Gale Banks Engineering's Top Sportsman Drag Truck
If you were worried that diesel drag racing was going to be limited to street vehicles, you'll be glad to know there are some full-tilt drag trucks also being built. Perhaps the most visible of these drag efforts is an '01 Chevy S-10, extended cab, Duramax drag truck that's being built by Gale Banks Engineering. The ex-Panella Racing Pro Stock truck was already built and certified to run the 7-second times that Gale was shooting for, and it was even painted red.
The chassis was built by Don Ness Racecraft with a swing-arm rear suspension that's an extremely tunable design found on many dragsters. Front strut suspension is used along with other regular stuff that's found on all of our trucks-like a Funny Car rollcage, mile-long wheelie bars, and a parachute.
While the chassis is standard Pro Stock stuff, the drivetrain is where things get interesting. One of the project goals was to develop racing parts for the Duramax engine through the use of this truck and pave the way for diesels to compete in the NHRA drag racing series.
The highly modified Duramax engine features a dry-sump oiling system, a stud girdle, a custom camshaft, rods, and ported cylinder heads. A pair of turbos is used with nitrous to reduce spooling time at the start of the strip-black smoke at sanctioned drag events is a big no-no. Because of the sub-3,000-pound projected weight of the vehicle, the crew at Gale Banks is shooting for 1,000 hp on #2 diesel and will use the nitrous mainly to keep smoke down while the truck is staging. Gale Banks notes, however, that if the truck isn't fast enough, the nitrous can be kept on all the way down the track or even switched to a double-compound (four-turbo) arrangement. Either way, it will be exciting to see once the truck makes a pass.
TTS Power Systems' Fullsize Chevy Drag Truck
Projects are often shrouded in secrecy, and the TTS truck is no exception. Steve Cole, president of TTS Power Systems, wouldn't give us a complete rundown of all the vehicle specs, but from what we did see, it looks to be a serious effort.
The truck is based on an '07 Chevy Classic extended cab, shortbed body that's completely made of fiberglass. Steve felt his customers would relate more to a fullsize truck than a smaller vehicle with a Duramax in it because most of them drive fullsize trucks. The chassis was built by Hanson Race Cars and is a double-framerail-type chassis similar to those found on Pro Modifieds. The frame features a strut-type front suspension and a four-link rear with a Mark Williams 9-inch-based axle.
The transmission is a five-speed Lenco and is hooked up to a modified Bruno drive with a custom TTS torque converter providing the power transfer. The engine is still mostly under wraps, but what we can say is it will be a highly modified Duramax making approximately 1,200-1500 hp with a TTS camshaft, heads, rods, and programming.
A custom air-to-water intercooler that was fabricated at TTS from a Spearco core will be used, and the exhaust will be 5-into-6-inch stacks. The turbos will be a compound setup using Turbonetics turbochargers that are "really, really big," according to Steve. Boost will be in the 80-plus-psi range, and the engine will also use a sheetmetal intake and an NOS Fogger system, where there will be a nitrous nozzle for each of the eight cylinders that sprays directly into the intake ports.
Work is still being finalized on the engine combination, but so far, a prototype motor reportedly made 1,211 hp on an engine dyno without the use of nitrous. When the engine program is finished, the truck will be ready to hit the strip on its way to some projected mid-8-second passes.
Outlaw Diesel's Twin-Turbo, Supercharged Cummins Ranger
Outlaw Diesel in Miami may have one of the fastest 4WD street trucks around once this bad boy is done. A twisted idea brought to life, this poor little Ranger didn't know what it was in for once Outlaw got ahold of it. 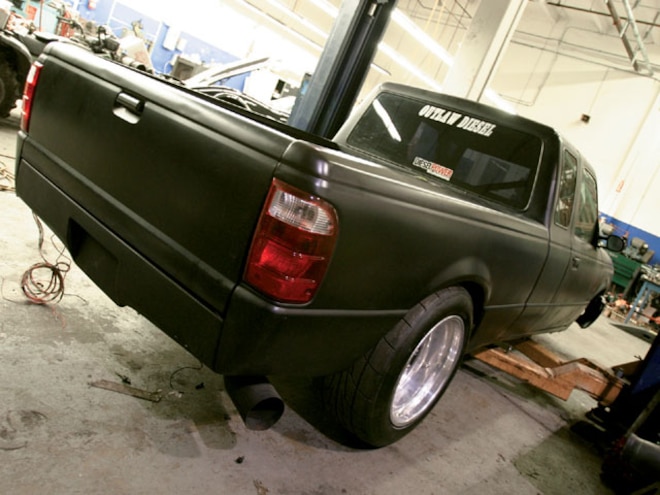 View Photo Gallery | 12 Photos
Photo 8/12   |   1997 Ford Ranger rear View
The truck itself is a '97 Ford Ranger with an '04 front clip and a good ol' 12-valve Cummins shoehorned into it. Did we say shoehorn? Sorry, it took even more than that. If you look closely at the pictures, you'll notice the radical engine setback needed for this project to work. When we asked Felix Aleman, president of Outlaw Diesel, how he did the engine swap, he laughed and said, "With a lot of Sawzall blades."
The truck was originally set up to be a big-tire truck, but Felix was worried people wouldn't identify with a tubbed truck as much as they would a normal-tire-sized vehicle. So a new plan of action was hatched, and the truck was converted to 4WD. The entire frame was first boxed for strength while a custom four-link front and rear suspension was built for the truck. A divorced NP205 transfer case was used along with a built Dana 44 up front and a Ford 8.8-inch in the rear. Both have 3.55 gears and may be up to the task of dragstrip launches because of the Ranger's relatively light 4,500-pound projected weight.
The Cummins 12-valve got a Hot cam from Haisley Machine, as well as Stage 3 ported heads. All the machine work was done at Haisley, while the engine was put together by the folks at Outlaw. Custom lower compression 16.5:1 pistons are used, and the block has been girdled for strength. A modified P7100 215 pump is used with Haisley delivery valves and Industrial Injection Dragon Flow injectors.
The induction setup is where things get very interesting. For boost, the engine relies on a unique combination of a Vortech Mondo supercharger blowing into twin HX35 turbochargers on a custom Outlaw Diesel-built header. All this air is then chilled by an air-to-water intercooler and two stages of nitrous oxide. "The blower should help spool up the turbos so there is almost no lag, and with the way the blower is pullied, we should be able to leave the line at near full boost [100 psi]," Felix said. With a projected 1,100-1,300hp level at the crankshaft, this Ranger should be able to spin all four Nitto 555R drag radials on its way to quarter-mile passes in the 9-second range. And, yes, it's street-legal in Florida.
Building something Crazy? You need this 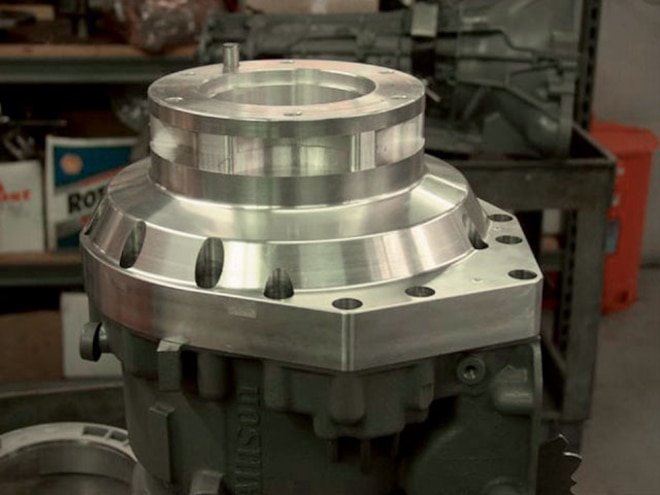 View Photo Gallery | 12 Photos
Photo 12/12   |   1997 Ford Ranger adapter
What is it? Well, with many drag trucks using mix-and-match parts that were never designed to work together-much less work in whichever vehicle they may be going into-custom engine and transmission parts are starting to become a reality.
This particular piece is in the possession of TS Performance's Dennis Perry and is an adapter that will mate an Allison transmission to an NV271 transfer case. This means that newer Fords and Dodges will soon be able to take advantage of the Allison's many speeds.
Currently, this adapter is part of a Cummins-powered Ford project, which along with the Allison transmission, will take the Chevy/Dodge/Ford diesel alliance to a whole new level.