Not Your Average GMC 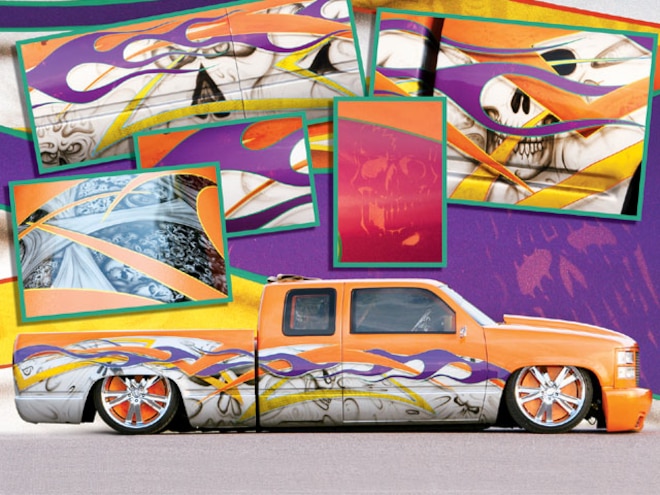 View Photo Gallery | 18 Photos
Photo 2/18   |   1994 Gmc Sierra right View
In a world of crazy graphics and slammed stances, it's hard to really stand out at a show-no matter how cutomized your truck is. Jeff Johnson of England, Arkansas, was able to overcome this difficult task by building a truck that is chopped, sporting two different custom door configurations, an amazing paint scheme, and an attention to detail typically found in the street-rod arena. So, why the obsession with creating a truck that had to stand out? It was simple: the man likes perfection and wanted a truck that displayed both his talents with metal and with a paint gun. The end result is more than just four wheels and an engine. The aftermath of that dedication is a cover truck appropriately named, High Maintenance. 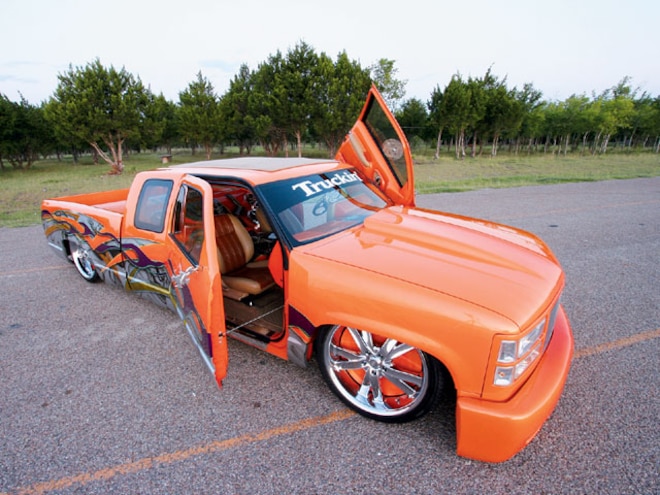 View Photo Gallery | 18 Photos
Photo 3/18   |   1994 Gmc Sierra doors
Jeff owns a paint and body shop in England, which he creatively named, Jeff's Body Shop. When the decision came in July of 2002 to buy and build a truck, Jeff went with a body style that sparked the sport-truck revolution: a '94 GMC Sierra. With only $4,000 invested in the pink-slip transaction, Jeff had a good foundation to begin work, and he wasted little time warming up the welders. 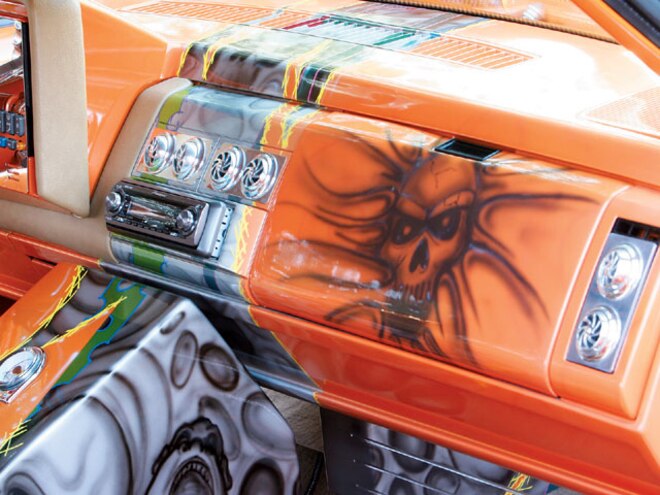 View Photo Gallery | 18 Photos
Photo 4/18   |   1994 Gmc Sierra dashboard
The suspension was the first thing to go on the stock list as Jeff, Randy Hamilton, and David Webb went to work by adding the necessary components to drop the fullsize down to an appropriate level. With the frame blasted to bare metal, it was sprayed DuPont Tangier Orange. After the paint had time to dry, the reassembly began. Up front, a pair of DJM Suspension 2-inch drop spindles, Firestone airbags, 250 Extreme valves, and Air Ride shocks lowered the front. Out back, an Ekstensive two-link was used, along with Firestone 'bags, Extreme valves, and a relocated gas tank that allows the rear frame to touch the ground. The air was supplied by an engine-driven compressor, as well as two smaller compressors in the bed for backup duty. After some convincing from a certain magazine editor, Jeff bolted on a larger-than-he-wanted set of Cruiser Alloy Chillyn wheels measuring 22x9 inches with Hankook 265/35R22 tires protecting the cast hoops. Now that the truck was nice and low, the crew at Jeff's Body Shop went to work on what they do best: paint and body. 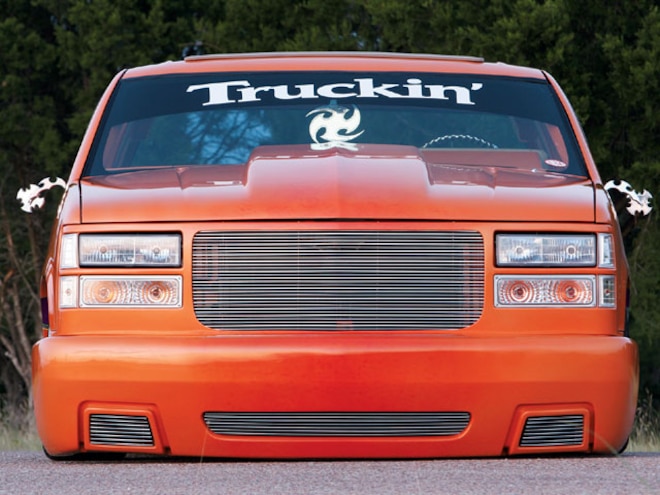 View Photo Gallery | 18 Photos
Photo 5/18   |   With a front view like this, do we really need to say anything?
The bodywork began with the Sawzall, as 6 inches were removed from the top. This large undertaking really changed the overall look of the truck, but that was only the beginning. With the top off of the truck, a huge 42x55-inch hole was trimmed out of the roof and replaced with a sliding ragtop for an open-air driving experience. Continuing with the body modifications, the Jeff's Body Shop team shaved the upper body line, welded the tailgate shut, removed the handles, antenna, and gas lid, and then added a Sir Michaels roll pan. Not to be outdone, they also swapped the stock door hinges in favor of suicide hinges on the passenger side, and a lambo-style on the driver side. Other not-so-subtle body tricks included the installation of a cowl hood, a Street Scene Equipment SS front bumper cover, and full tubs in the bed. 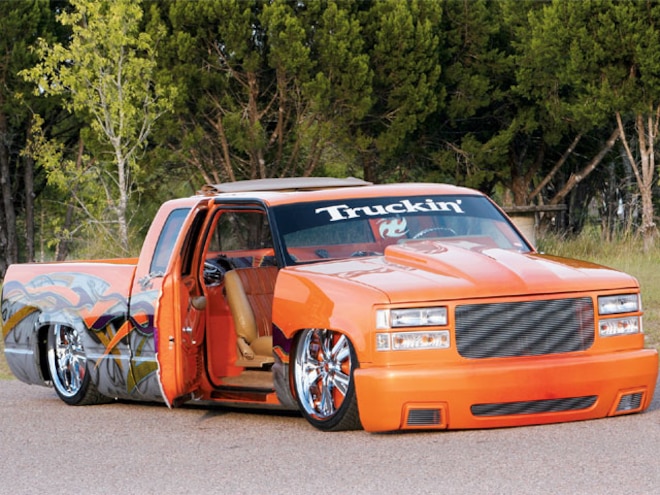 View Photo Gallery | 18 Photos
Photo 6/18   |   1994 Gmc Sierra front View
After the body had been prepped for paint, Jeff filled his spray gun with DuPont Tangier Orange and applied the bright hue as the basecoat. Now that the truck was orange, Jeff went to work masking a myriad of graphics, which included but were not limited to: flames, skulls, nuts and bolts, snakeskin, industrial gears, tear-away patterns, and even an iron cross here and there. By using DuPont Psycho Silver, Purple Passion, bright yellow, green, and black, the truck became as colorful as it is menacing. Hidden within the solid colors and graphics are ghosted skulls everywhere.

View Photo Gallery | 18 Photos
Photo 10/18   |   Out back, Jeff welded the tailgate shut, removed the stock taillights, and added some of his patented airbrushing skills to the skin.
You really need several good trips around the truck to really appreciate how much effort went into this mind trip of automotive artistry. Inside of the bed, those huge wheel tubs were treated to custom paint, as well. Jeff masked off the areas he wanted to paint, then applied color-matched bed liner, and airbrushed in where the graphics were to call home. Once the paint was cut and buffed, Jeff added diamond-clear headlights, a billet grille, and small iron cross billet mirrors to complete the truck. This truck doesn't just smack you in the face when it drives by, it drop-kicks you and then runs you over.
Opening those crazy doors revealed an interior that is just as wild as the paint. Jeff and his crew smoothed and painted the stock dash, door panels, and then built a totally custom center console that houses the air switches and air gauge, which had also been painted and airbrushed. With the bright stuff inside, Jeff turned to Buddy's Upholstery in Cabot, Arkansas, where he added the tan velour headliner, tan carpet, and the leather and ostrich-covered '90 Honda Civic seats. Back at Jeff's Body Shop, Shane Price was recruited to build a subwoofer box where the back seat once resided.

View Photo Gallery | 18 Photos
Photo 11/18   |   1994 Gmc Sierra closeup Skull Paint
The monster structure now houses four 10-inch Kicker subwoofers, one of the two Sony Xplod 1,200-watt amps, and the unfortunate remains of a subwoofer casualty. Of course the box was fiberglassed, painted, and airbrushed to match the rest of the truck. Billet vents, knobs, and a Colorado Custom steering wheel finished off the insane interior.

View Photo Gallery | 18 Photos
Photo 12/18   |   1994 Gmc Sierra ostrich Seat Cover
Jeff didn't leave the underneath of the hood stock, either. He and his crew built custom inner fenders to clear the 22s and smoothed and painted every piece of plastic they could. Chrome and billet pulleys add good looks and an AIRAID intake and Flowmaster exhaust give the truck some extra ponies.
When talking at dinner, we asked Jeff what he loved so much about working with trucks, and his answer was short and sweet, "I think of it as an art form, and I love it." We agree, and we couldn't have picked a better cover truck for our paint and body issue.