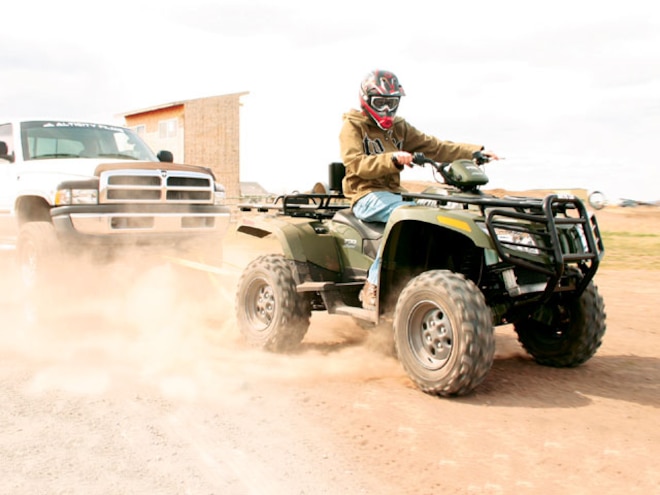 View Photo Gallery | 13 Photos
Photo 2/13   |   700 Diesel Atv Lombardini driving View
When the call came in from Rexburg Motorsports in Rexburg, Idaho, telling us it had a diesel ATV in stock, we were shocked-and very curious. In the diesel-magazine business, we're used to hearing about diesel engines being used in various applications-from land-speed cars to submarines-and we've seen just about every imaginable use for a diesel engine.
This concept is unique because most of the vehicles on the pages of Diesel Power use industrial diesel engines for their power and torque output, and for the most part, these engines are large and heavy. For a diesel engine to be used in an ATV, it must be small, light, and powerful. Naturally, diesel engines are built stronger and heavier than gasoline engines to withstand the pressure from the diesel combustion. Those aren't great attributes in the weight-conscious world of ATVs.
Lightweight Diesel Engine
The 700 Diesel ATV from Arctic Cat answered this power-to-weight ratio challenge with a 686cc (0.6L), inline-two-cylinder diesel made by the Italian manufacturer Lombardini. The Lombardini LDW 702 diesel engine features a 3,600-rpm redline and is typically used in small industrial equipment and generator applications. In the Arctic Cat ATV, the engine is naturally aspirated and fed by a Bosch indirect-injection mechanical fuel system. The 145-pound powerplant is rated at a modest 17.81 hp and 30 lb-ft of torque. At 823 pounds, the whole ATV weighs about 110 pounds more than the 700cc gasoline version.
Built For Utility
The weight and high torque rating will make Arctic Cat's 700 Diesel ATV more suited for utility use than recreation. Arctic Cat plans to market the 700 Diesel ATV for agricultural and industrial applications in markets where diesel fuel is more convenient than gasoline. It's likely these customers will use the Arctic Cat ATV because diesel fuel is readily available on the job site or the farm. Arctic Cat is hoping customers will see the appeal of the 700 Diesel ATV-plus, it will be legal to run tax-free red diesel as long as it's only used off-road.
Military Use
Military sales are also high on Arctic Cat's agenda with the 700 Diesel ATV, so it's no coincidence the ATV is only available in Army green. Engineers worked closely with Lombardini to ensure the engine would meet all U.S. military fuel specifications. The two-cylinder diesel will run efficiently on six forms of the fuel, including jet fuel and biodiesel.
Road Test
We had the opportunity to ride the 700 Diesel ATV on a test track next to the Rexburg Motorsports facility. As you mount the ATV, you're greeted with a digital display on a small dash in the center of the handlebars. To the left of the display, there's a wait-to-start light that stays on until the glow plugs have heated the cylinders enough to start the engine. Surprisingly, the engine doesn't vibrate as much as you might think. The engine noise is unique and sounds a bit like a gas engine with mechanical issues. The ATV handles well in the dirt, and the automatic transmission delivers the power without complaint. Although the horsepower is not very impressive, the machine is very capable off-road and was able to climb some steep, loose grades without trouble
Tow Test
The 700 Diesel ATV has an impressive 1,050-pound towing capacity and comes standard with a 2-inch receiver hitch. We decided to test the towing performance by strapping it to a 3/4-ton Dodge to see if it would be able to budge the heavy Cummins truck. Even in the loose dirt, the ATV had no problem pulling the fullsize truck around. We couldn't even get the engine to bog down when the driver in the truck applied the brakes. The 700 Diesel ATV would spin the tires before the engine showed any signs of throwing in the towel. Quite impressive for a little 686cc engine
LombardiniDiesel Engine Specs
Type: Four-stroke, liquid-cooled, two-cylinder engine
Displacement: 686 cc
Bore and stroke: 2.95 x 3.05
Injection: Bosch indirect mechanical
Cylinder block: Cast iron with integrated liners
Cylinder head: Aluminum
Crankshaft rotation: Counterclockwise
Horsepower: 17 at 3,600 rpm
Torque: 30 lb-ft at 2,000 rpm
Idle speed: 900 rpm
Redline: 3,600 rpm
Noise output: 60 dB (idle), 77 dB (redline)
Weight: 145 pounds