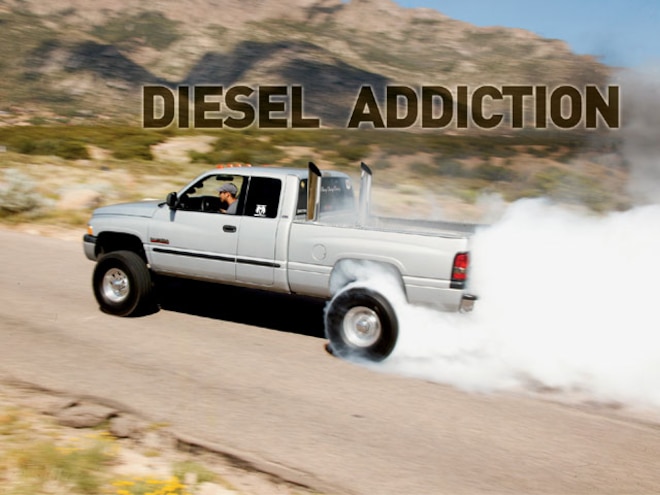 View Photo Gallery | 13 Photos
Photo 2/13   |   2000 Dodge Ram 2500 Cummins smoking Road
People buy diesel trucks for a lot of different reasons.
Some are snowbirds who tow their travel trailers and get good mileage. Then there are ranchers who need lots of torque to pull heavy loads of feed or livestock. Luis Otero is the kind of owner who wanted to tow his heavily modified Toyota Pickup to and from the trail. As the Toyota became more purpose-built for rockcrawling, it became less comfortable on the streets around his hometown of Albuquerque, New Mexico, requiring a tow rig. Luis had some money burning a hole in his pocket after returning from a tour of duty in Iraq with the 150th Fighter Wing of the New Mexico Air National Guard, prompting him to purchase this '00 Dodge Ram 2500 with the 5.9L Cummins three years ago.
It Always Starts With . . .
Luis was already predisposed to modifying vehicles, so it wasn't long before the Dodge received its first upgrade: an Edge chip worth 60 hp. The horsepower was like a drug for Luis, and he knew he wanted more. Soon the Toyota off-road toy was sold, and Luis turned his full attention toward the Dodge. The money from the Toyota was needed to replace the three transmissions, two turbos, and Dana 70 pinion that Luis had broken while drag racing his diesel truck. And he thought rockcrawling was hard on parts.
. . . and Turns Into 1,231 lb-ft
Luis has no regrets about the breakage and considers it a rite of passage. His truck currently produces 534 hp and a staggering 1,231 lb-ft of torque on straight #2 diesel. This has allowed him to run the quarter-mile at a best of 13.8 seconds at 95 mph on 35-inch tires. The power comes primarily from an Industrial Injection Super Phat Shaft 62 turbocharger. The big turbo is wastegated at 45 psi to help the head gasket live and pulls air through a Scotty II intake with a UNI filter. A Holley blue lift pump provides diesel fuel through 1/2-inch fuel lines to the thirsty Diesel Dynamics Stage III injectors. Fueling and timing are controlled by an Edge Drag Comp module cranked up to level 5. The spent fuel then exits through a 4-inch, mandrel-bent, turbo-back exhaust that terminates in dual 6-inch, miter-cut stacks.
Then The Transmission Died
After going through transmissions like Goldilocks goes through porridge, Luis finally found one that's just right: a Goerend transmission with a billet input shaft, upgraded valvebody, Torrington bearings, and all-new internals. A billet flexplate, a Goerend triple-disc torque converter, and a PML transmission pan are also used to stand up to the power and abuse Luis dishes out on a regular basis. From there, power is routed to the stock NV241 chaindriven transfer case, which is still kicking after numerous four-wheel-drive launches at the dragstrip.
Two Sets of Tires Later
The transfer case splits power to the stock Dana 60 and Dana 70 axles, which are capped with 16x8-inch Eagle Alloy rims wrapped in 315/75R16 Pro Comp Xtreme A/T tires. Luis recently purchased his second set of these tires and said he was very pleased with the 32,000 miles he got out of the first set, considering those miles included many smoky burnouts and full-throttle launches.
Luis is finally satisfied with the truck in its current form. Instead of modifying his Cummins engine further, he is focusing his time and energy on an International Scout he recently purchased-the Dodge will finally be the tow rig it was intended to be. If Luis's track record is any indication, though, we don't expect the Scout to remain stock for very long, so he'd better start shopping for a trailer again.