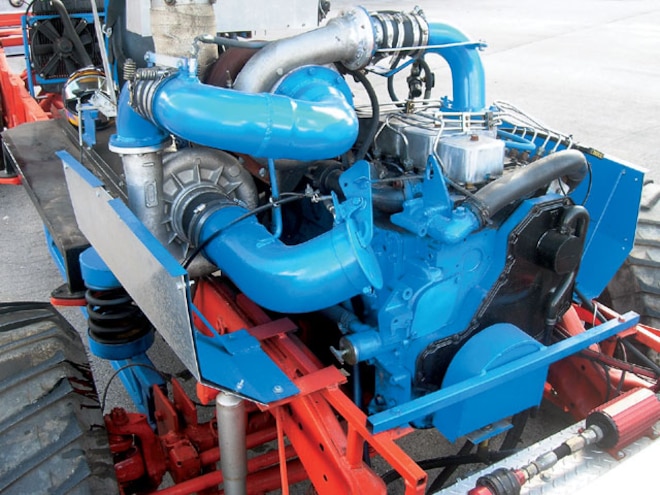 View Photo Gallery | 2 Photos
Photo 2/2   |   sled Puller front View
With gas engines, racers don't want to talk about their cam specs. With a diesel pulling motor, they don't want to talk cam specs, injection-pump specs, or turbocharger specs-in fact, they almost always keep their engines completely under wraps. That's why we were surprised to see the body up and a crowd around Dave Radcierez's "How Do You Like Me Now?" Modified pulling truck at the recent DHRA event in Las Vegas.
When asked about his lack of secrecy, Dave simply said, "It promotes the sport. People want to see what a Modified pulling motor looks like. Even if you had $45,000 to build one of these motors, enough is hidden from view that you could never build an exact duplicate." While Dave didn't reveal all the details of his monster engine to us, he did give us enough to make things very interesting and shared some good ideas for our own 12-valve as soon as we can get an extra $45,000 approved for our budget.
Water Injection
Water injection is a big part of keeping EGTs low enough so pulling motors will live, and Dave uses a lot of it. A Haisley Machine water-injection kit was used and has four nozzles located in the head, one in the intake, and one between the stages of the turbos. During a normal pull lasting 8 or 10 seconds, the engine will be injected with almost a gallon of water.
Turbos
Dave credits much of his success to his custom twin-turbo setup that was built by Mass Diesel of Walpole, Massachusetts. He wouldn't give us exact specs on the 'chargers, but he would tell us the small turbo was built by Schwitzer, the large one was built by Holset, and both combine to produce about 137 psi of boost.
The Tune
"We can make more than 2,000 lb-ft of torque at 150 psi, but then the block will split," Dave says. He found the motor makes its best power with the exhaust gas temperature around 1,700 degrees F but has seen temperatures as high as 2,100 degrees. He leaves the line at a ridiculous 6,000 rpm, and the weight of the sled will load the motor to about 5,600 rpm down the track. Dave credits Fluidampr for making a harmonic balancer that will let the bearings live at this rpm and can go through almost an entire season before he has to freshen the motor.
Short-Block
The short-block assembly was done by Serious Diesel Performance of Reedsville, West Virginia, and features a Haisley Machine "race-block" that has been filled with block filler and has a stud girdle to help everything stay together. The block has been machined for fire rings, and coated Arias pistons swing on a stock crank and rods.
Injection Pump
Top secret stuff to be sure, but Dave revealed more than most. The pump is a P7100-style P-pump that's actually made by Nippondenso then reworked by Scheid. The lines are all custom-bent by Dave and lead to Haisley Machine injectors that were custom-made for this application.
Head
The cylinder head has been reworked with oversized valves, custom valvesprings, and was extensively ported on the intake and exhaust sides. A custom Scheid billet camshaft helps the top end get all the air it needs from the turbos.