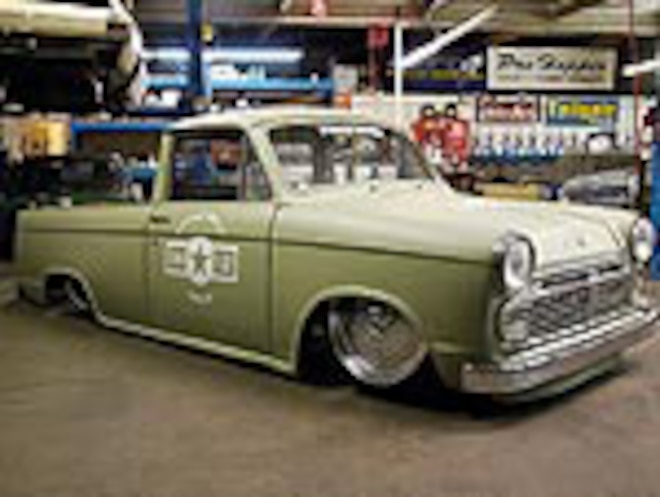 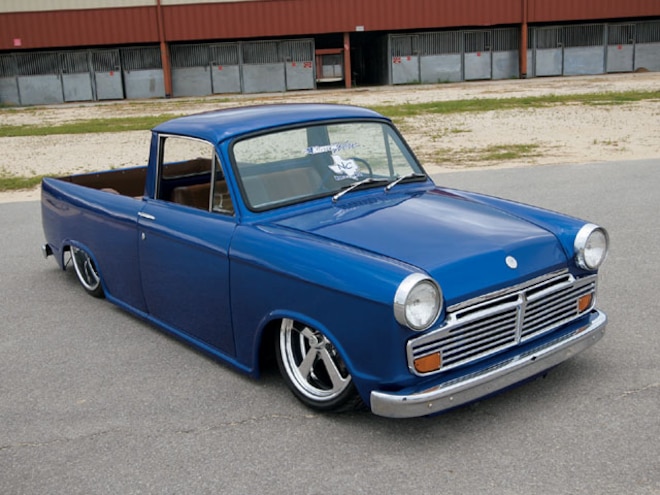 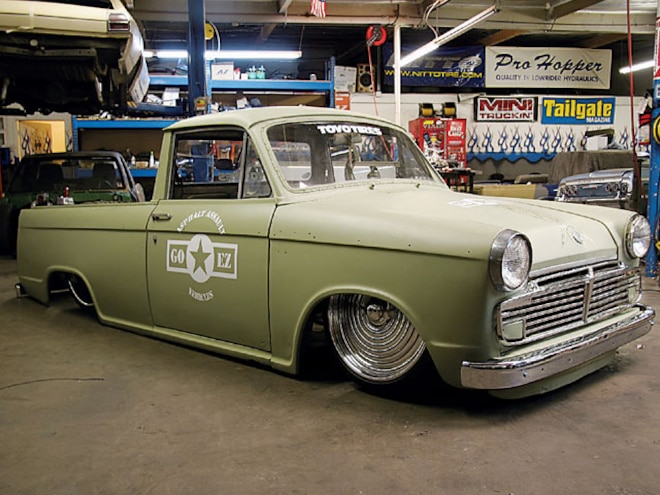 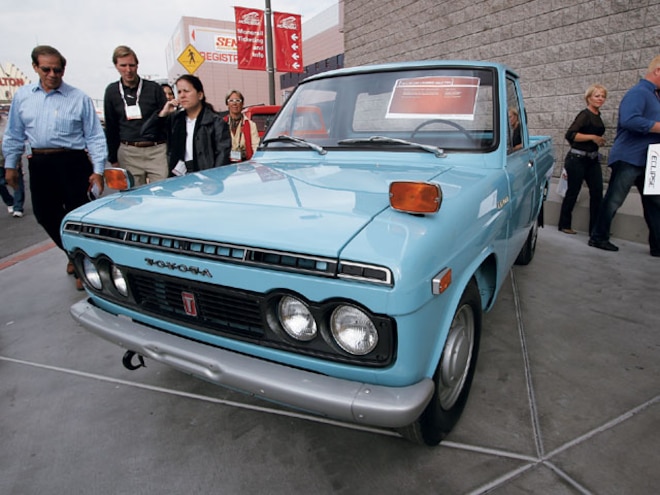 View Photo Gallery | 12 Photos
Photo 7/12   |   A very stock '71 Hi-Lux.
'64 Stout
In 1964, Toyota entered the American market with a little beast known only as the Stout. It wasn't very pretty, but it wasn't meant to pose for pictures. It was durable and needed to compete with trucks like the Datsun 320. The truck was equipped with a 1.9L 1897cc motor, and it put out a smooth 85 horses.
'65-'68 Stout
The Stout continued to terrorize the public with its looks but kept on truckin'.
'69-'72 Hi-Lux
In '69, looks improved, and compared to the Stout, it was luxurious. It was still a rugged little truck that came standard with a four-speed transmission. The motors varied over the years, ranging from 85 horses to 108 horses. 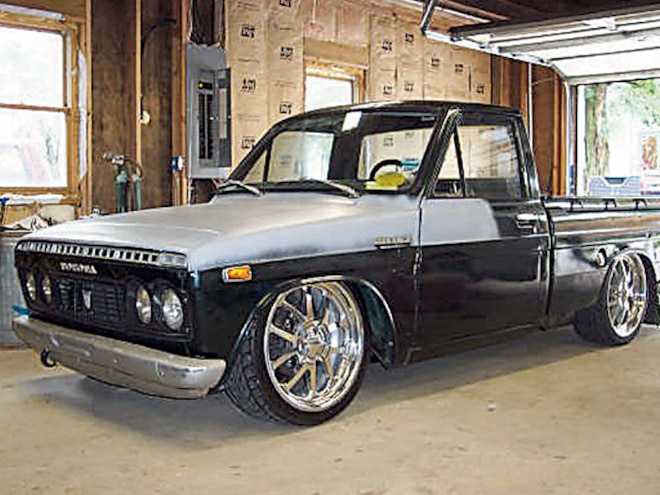 View Photo Gallery | 12 Photos
Photo 8/12   |   This '70 Hi-Lux looks right at home with some big wheels and a lower stance.
'73-'74 Hi-Lux
Interior improvements were the only real changes in these years.
'75-'78 Pickup
A larger and cleaner looking truck came out in 1975 that offered the 20R. Along with this newer motor, the five-speed manual transmission was also an option.
'79-'80 Pickup
The 2.2L motor was one of the only nice things about these trucks. The SR5 package was upgraded, but to make things better, you could now get a 4x4 pickup. People who lived in the mud had a lot to smile about.

View Photo Gallery | 12 Photos
Photo 9/12   |   Not even this '72 Mazda could escape the hands of an eager minitrucker.
Mazda Trucks
In 1972, the Mazda B-series was introduced to the United States Naming these trucks wasn't a problem for the guys at Mazda; they simply named the trucks after their motors until recently, when they changed their name to just Mazda Truck.
'72 Mazda B-series
In 1972, the Mazda B1600 was introduced to United States consumers.
'74-'76 Mazda Rotary
A very overlooked and rare truck is the Mazda Rotary that was introduced in 1974. The truck had a 13B four-barrel carburetor and was available only in the United States and Canada. They had a very distinct look, including a special front grille and tailgate. Only about 15,000 of these trucks were produced. These trucks actually didn't sell too well and were redesigned in 1977.
'77-'79 Mazda B1800
The 1.8L was brought out this year.
'80 Mazda B2000
1980 saw the introduction of the 2.0L 1970cc.
Chevrolet Trucks
The Light Utility Vehicle (LUV) was an easy decision for Chevy. You see, they already owned a portion of Isuzu motors of Japan. So, by simply taking an Isuzu and slapping some Chevy badges on it, the solution was simple.
'72 Chevy LUV
In May of 1972, Chevy introduced the LUV to United States markets. The 1.8L motor had a two-barrel carburetor for power.
'73 Chevy LUV
The grille changed slightly, but the biggest difference was the amount of trucks produced, which was 39,422.
'74-'75 Chevy LUV
The lights went from under the tailgate and moved to the bed. Most importantly for Chevy LUV-ers, the all new Mikado hit the market. It was the fully equipped model.

View Photo Gallery | 12 Photos
Photo 12/12   |   One of the most timeless designs, the Chevy LUV. This truck will always be popular amongst minitruckers you and old.
'76-'77 Chevy LUV
In 1976, new motor and transmission options meant more sales-more than 46,000 to be exact. And then nearly 68,000 in 1977.
'78 Chevy LUV
Two less headlights meant a new look in 1978, and a longbed was available on a new chassis. Sales also reached new higher limits for Chevy this year.
'79-'80 Chevy LUV
Looked like a '78, but now you could take in the dirt with the introduction of 4x4 Chevy LUVs in 1979. The '80 was basically the same truck, but changes were just around the corner for the LUV in the coming years, although they definitely didn't become more popular. The Chevy LUV of the '70s is a timeless beast in our hearts, however.