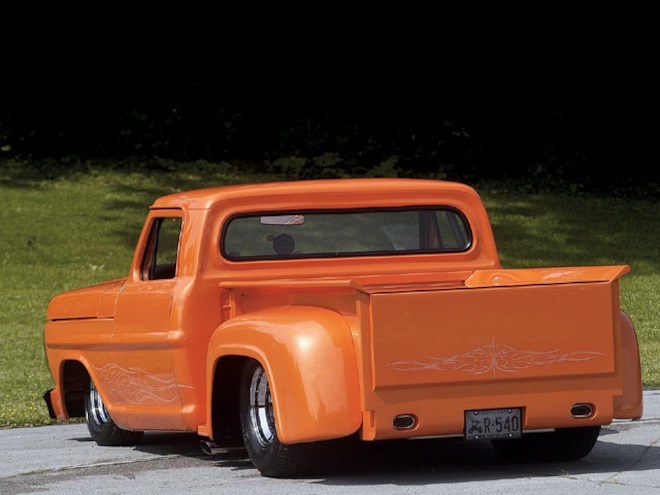 View Photo Gallery | 9 Photos
Photo 2/9   |   1968 Ford F100 drivers Side Rear View
People get into the custom truck hobby for different reasons, and some just come by it, naturally. B.J. Caudill from Prestonsburg, Kentucky, is one of the few born with a passion for custom trucks flowing through his blood stream. B.J.'s dad was a drag racer, and he attended his first National IHRA event at the tender age of 3 months old. B.J. also worked on his dad's race team while growing up and learned valuable lessons on building the best with what you have available.
B.J. bought his first truck, a retired Kentucky West Virginia gas truck, when he was 15 years old for $600. The truck was in decent shape but not much to look at, so B.J. and his dad spent many long hours making the old work truck something only a high school kid could dream of. In fact, it even placed in the top fifteen at the F-100 Super Nats in Pigeon Forge four years in a row. As much as B.J. loved that old truck, he knew he was going to have to get rid of it to be able to afford the truck he had been dreaming of building. So, with his old truck sold, B.J. began a new project with a donor '68 Ford frame, a cab from the truck that his granddad drove, a used welder, and many freezing nights by the potbellied stove in the small family garage. 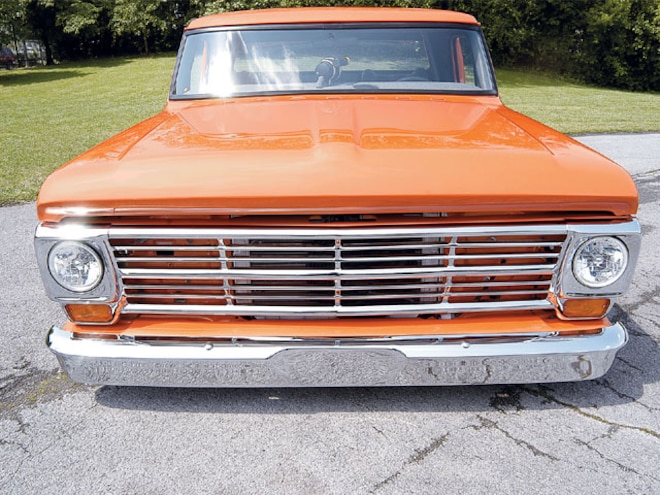 View Photo Gallery | 9 Photos
Photo 3/9   |   1968 Ford F100 front View
They first started by modifying the frame for a four-link rear suspension, Air Ride Technologies ShockWaves, and a Fat Man Fabrications front-end that would eventually drop the vehicle 12 inches at all four corners. While they were in the middle of modifying the frame, B.J. got sent off to the Kentucky Department of Criminal Justice Academy for 16 weeks of intensive training to become a state trooper. B.J.'s dad would cut out various tabs and mounting brackets during the week, so that when B.J. made it home on the weekend he could weld all of the various parts to the frame.
With the frame finally completed, it was time to start on the body of the truck. Using their tried-and-true method of cutting cardboard templates from the frame buildup, B.J. and his dad, with guidance from master painter Bud Bradley, started cutting everything they could think of. If they really wanted to be noticed at the F-100 Nationals, they had to spend the time paying attention to the details. They started by shaving all of the normal goodies like the door handles, keyholes, and emblems. They felt confident with what they had learned and decided, "Why not chop the top 4 inches?" So, in their little two-bay garage they chopped the top 4 inches, smoothed all of the body seams, and even had time to make their own tailgate. B.J. was amazed by the skills they had picked up, and he jokingly said it would be cool to have a shaved firewall, only to come home to see that his dad had already done it. With the body completed, it was time for the truck to make its first trip out of the family garage and over to Bud Bradley's for a slick coat of Tequila Sunrise Orange paint and some TLC.
With the body off at the painter, they turned their attention to deciding what was needed to motivate the truck. The duo knew that a truck with an attention-grabbing look would be a waste with a factory six-cylinder engine between the fenders. Since B.J. helped build his first engine in grade school, he knows a thing or two about engines. Using what money he had left over from selling his last truck, B.J. assembled a 514-cid Ford crate motor, mated to a Joe Mayhab-built Ford C6 transmission. With the rolling chassis back from paint and the new motor installed, it was time to head off to the first show. B.J. was rewarded for all of his hard work with a Top 15 pick at the F-100 Nationals in the full custom class.
B.J., now a Kentucky State Trooper, knows that he would be nowhere without his family and friends. In fact, they are back in the same garage, building a '73 F-100 for his mom and dad that will roll side by side with B.J. at the '07 F-100 Nationals. B.J. would also like to give special thanks to the love of his life, which, even though he forgot to include her name, stood beside him throughout the build. She started out as his girlfriend, and by the time you read this, they will be married. Maybe it won't be too long before there is another young 'un with custom blood in his veins to take up space in that family garage.
The 411