Chris Sainz' First Attempt Building His '04 Gmc Sierra Landed Him More Than Just a Trophy, It Got a Cover! 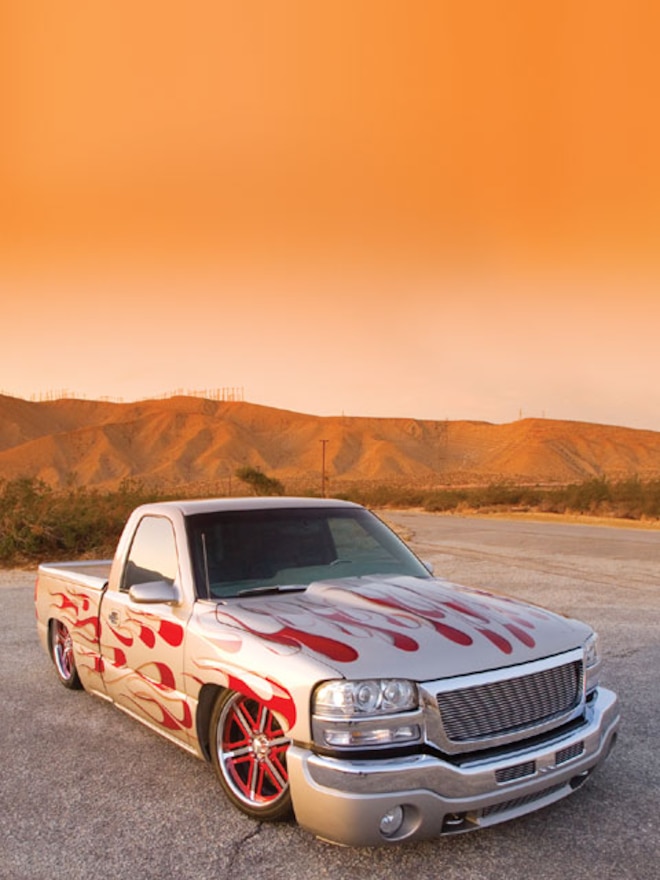 View Photo Gallery | 9 Photos
Photo 2/9   |   2004 Gmc Sierra front View
Chris Sainz is one of those guys who is living the it's-better-late-than-never lifestyle. He grew up always liking custom trucks but never actually had the chance to work on one. Instead, he spent his days starting a business and being a typical American. Starting a business for a lot of people is not easy because it takes an immense amount of time and dedication, and Chris had to shelve his dream of building a truck. After a few years, he found himself in an odd situation. Time was no longer of the essence, and every minute and dollar didn't have to be spent on the business. So, what's a man to do? Chris knew exactly what to do: Pull his dream of building a truck off the shelf and in a blinding fury built this custom. With the guidance of a few friends, Chris was well ahead of the learning curve and wasted no time in changing his ideas into reality.
The chassis of Chris' hauler has been treated to a list of no-nonsense modifications to get the truck low and to keep it riding like a luxury car. With the help of Kevin at Grunion Fab, the front suspension was fit with Belltech drop spindles, Firestone industrial airbags, and a set of custom shock mounts, and the frame was notched for the tie rods. Out back, the framerails were stepped up with a low-profile step notch, and Grunion's chrome-moly parallel four-link was installed with another pair of Firestone industrial airbags and a pair of shocks. The air suspension was plumbed into two 5-gallon storage tanks and a pair of Air-Zenith 12-volt air compressors. The new stance is perfect for hugging the 20- and 22-inch Bonspeed wheels, wrapped in Yokohama Parada tires. 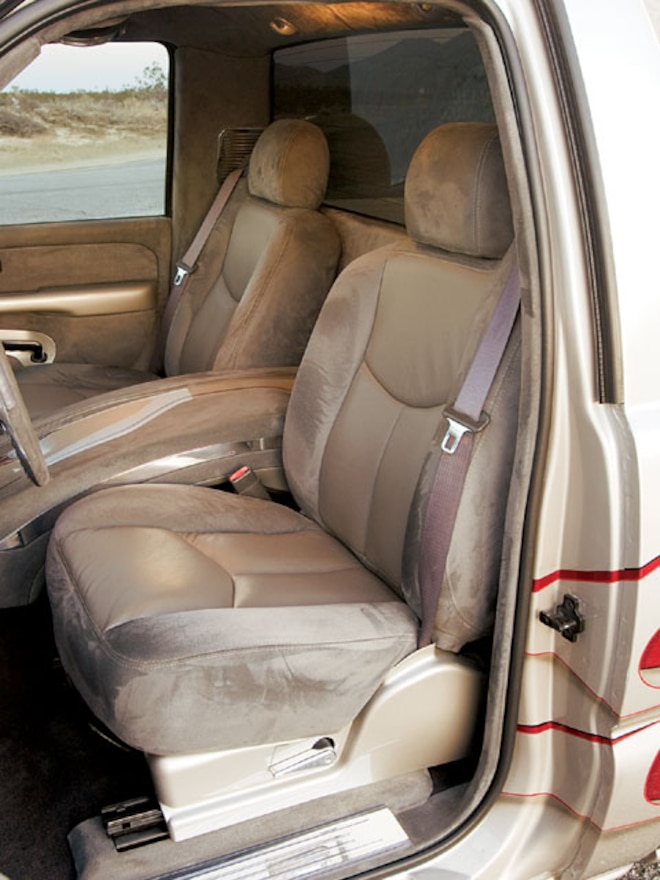 View Photo Gallery | 9 Photos
Photo 3/9   |   "I didn't want to go to shows anymore and spectate; I wanted a show truck of my own." -Chris Sainz
The sheetmetal of this hauler has seen its fair share of modifications to ensure that it looked slick and smooth before the paint was applied. Antonio Sease shaved and relocated the tailgate handle, molded in a steel roll pan, and swapped the factory hood for a cowl-induction piece from Reflexxion, along with a Street Scene wiper cowl. Then, the truck was rolled into the paint booth and taped off for a set of Brandy Wine flames and pinstriped with House of Kolor Red and Black. After Chris got his truck back, it was finally time for all of the goodies waiting to be installed. He installed a billet grille from Trenz, along with the bumper and lower valance, and he swapped out the side-view mirrors for a set of Street Scene sport mirrors with turn signals. Matrix lighting replaces the run-of-the-mill factory lights, and Grippin billet door handles finish off the exterior without going overboard.
Under the hood, Chris has added some performance goodies, as well as a host of shiny accessories to dress things up a bit. In the go-fast department, he bolted up an AEM Brute Force air-induction intake, a high-flow air filter, and combined with Gibson stainless steel headers, a custom exhaust with a single-in, dual-out Flowmaster muffler. In the process, he also added a chrome-plated alternator, an Optima battery, and a set of Billet Specialties polished billet caps.
In the creature comfort department, it is apparent that Chris wanted the interior to look extra special. He called up the guys at The Interior Shop in Phoenix and penciled in a time that he could bring the truck down. Once there, Chris sat down with Todd Jubert and Big D, and he decided on the look, materials, and what stereo components he was going to have installed. Todd started off by constructing the center console that resides between the leather- and suede-trimmed bucket seats that house two JL Audio 10W3 subwoofers. Once inside and looking up, you will see another handcrafted console attached to the headliner with pinstriped flames and wrapped in more suede. Chris accented the cowhide landscape by adding color on the door panels, the dash, and the center consoles. The bed received the same treatment, with a custom sub enclosure that matches the center console inside the cab and houses two more JL subs and a 15-inch video monitor. Attached to the underside of the tonneau cover, Todd built a custom pod that was painted and pinstriped to hold two 7-inch Icon monitors. Todd laid down more pinstripe flames before everything was covered in more suede. After Todd wrapped everything up, the truck was handed over to Chuck Jubert. He runs The Billet Shop in Phoenix, and he milled an army of aluminum dash inserts and speakers covers, polishing them to a perfect finish before they were installed.
One thing Chris really enjoys about his truck is that it gives him time to spend with his fellow enthusiasts. Our sources tell us that Chris has been petitioning the Arizona chapter of Negative Camber for really long time. He has shown the values and the desire that it takes to display the NC logo; he just doesn't know it yet. As you read this, Chris should have noticed the logo that was secretly placed on his window, but if not...surprise!
The 411

- OF
By Galen Armenta
221 Articles