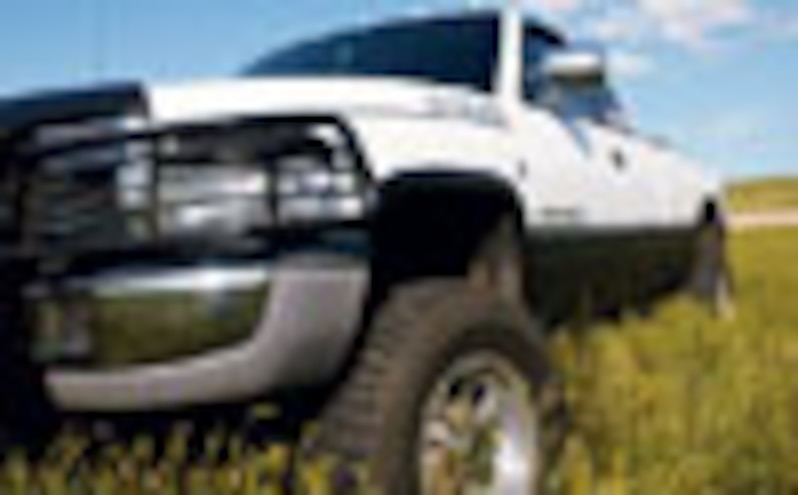 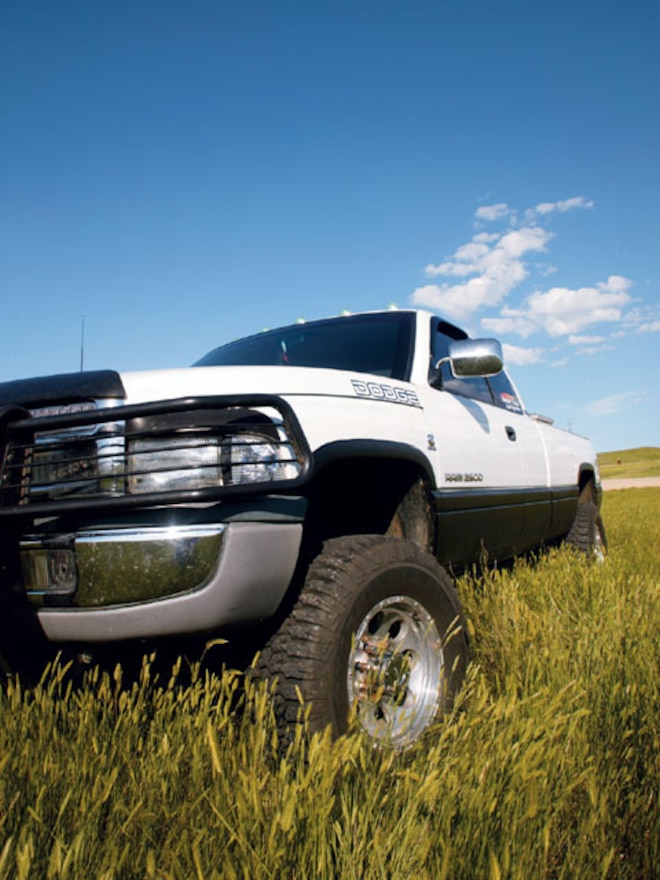 View Photo Gallery | 2 Photos
Photo 2/2   |   1997 Dodge Ram 2500 cummins Side View
Josh Starnes wanted a truck that could do it all-get decent fuel mileage for daily driving around his home of Sioux Falls, South Dakota, tow his boat on the weekends, and run quick times at the dragstrip. To accomplish these tasks, Josh purchased a '97 Dodge 2500 three years ago. His father had owned Cummins-powered trucks for a number of years, and both father and son always liked them. Josh attended WyoTech and studied diesel technology, so the decision to ditch his gas-guzzling, 11/42-ton pickup for a diesel was a no-brainer.
Josh wasted no time in modifying his new truck, jumping in with both feet. Unfortunately, those feet went right through the head gasket. Fifty-five psi of boost caused the gasket to let go, and regrettably, it took the head with it. Instead of patching the truck back together, Josh used the knowledge he gained at WyoTech and help from the crew at Mike's Custom Trucks in Northwood, North Dakota, to tear the engine down and build it right. The 5.9L Cummins block was decked, and all the internal components were balanced before being reassembled. A fresh head was purchased and machined for O-rings and 14mm head studs to make sure the new marine head gasket stayed in place, even under high boost.
With the machine work and assembly completed, Josh was confident his 5.9L could hold up to whatever abuse he could dish out. Power comes from a High Tech Turbo 64/14 Quick Diesel turbo with a 64mm compressor, 71mm turbine, and 14mm wastegate housing. The turbo is bolted to an ATS Pulse Flow exhaust manifold and exits through a 4-inch downpipe that routes to dual 5-inch stacks. Boost is currently set at 61 psi at the wastegate and mixes with 435hp EDM injectors from New Era. The thirsty injectors are fed by a P7100 injection pump fitted with a #0 fuel plate and PDR's governor spring kit. The spring kit, in conjunction with the balanced internals, lets the Cummins spin to 4,000 rpm. This combination has made 466 hp and a whopping 1,133 lb-ft of torque running #2 diesel on Rapid Diesel's Mustang dyno.
To stand up to all the power, the 47RE automatic transmission was sent to Dave Goerend to work his magic. Dave added an upgraded valvebody, Torrington bearings, and all-new internals to the transmission. A Goerend triple-disc torque converter and deep pan were also added to help the tranny live a long, healthy life. Aft of the transmission, the power is routed through the stock NP241 chaindriven transfer case and the Dana 60 and Dana 80 axles.
While the engine has received the bulk of Josh's attention, the rest of the truck has not been neglected. Rhino Linings was added to the bed and the rocker panels to prevent rock chips and similar damage that can result from large, aggressive tires. Daystar front coil spacers and a rear add-a-leaves were used to clear the 305/70R17 Maxxis Bighorn tires mounted on 17x9-inch Pro Comp model 1079 aluminum rims. Inside the truck, Auto Meter gauges mounted in an A-pillar pod monitor the boost pressure and EGT. The end result is exactly what Josh wanted: a truck that can do a little bit of everything. So what's next? "Well, I did just run my first truck pull," Josh said, "and I didn't break anything, so I figure I'll do it again." With the work that has been done to this engine, we don't anticipate the engine will be the weak link at the sled pulls.