Swapping The Duramax Engine Into A Chevy Suburban 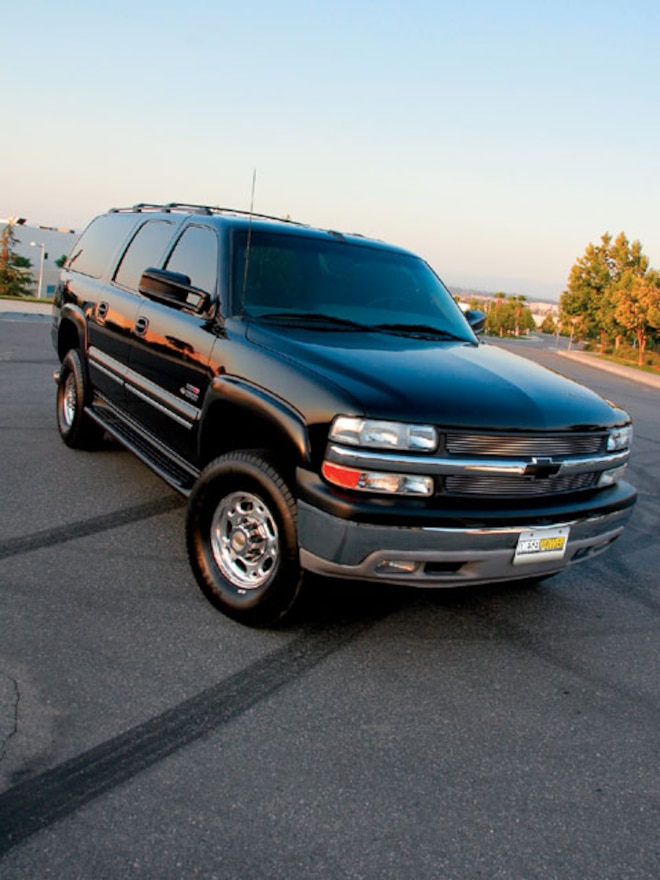 View Photo Gallery | 7 Photos
Photo 2/7   |   2000 Chevy Suburban front View
For years, General Motors has been hinting at the possibility of more diesels in its lineup of cars and trucks, and the latest news is this will supposedly happen. It's been a long time coming, and for the last eight years, Suburban owners have had to settle for gasoline-guzzling V-8s that provide merely adequate power and torque.
Big-Block BluesJust ask Bub Broten. He's been a fan of Chevys, well, forever, especially black Suburbans, and he's been hoping for a Duramax diesel version since he first heard rumors of one back in 1999. That's because he loves to take his family to the desert with a toy hauler trailing behind, stuffed with five quads and a sandrail powered by a 500hp Chevy V-8 (what else?). 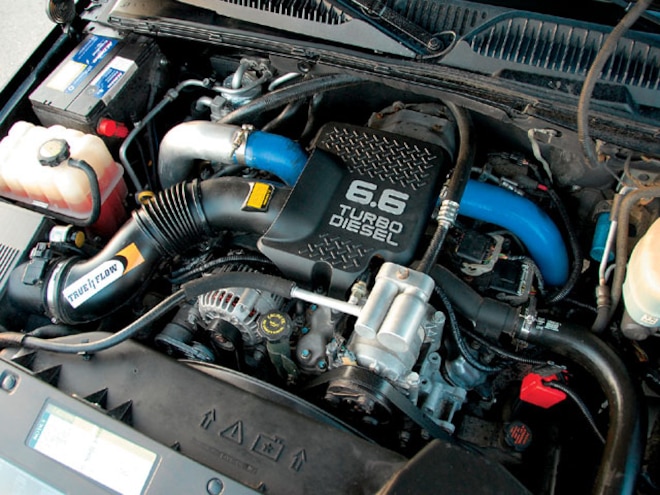 View Photo Gallery | 7 Photos
Photo 3/7   |   2000 Chevy Suburban diesel Engine
Bub's 454-powered 31/44-ton '96 Suburban barely had enough beans to do the job, though, and with a wife and three kids along for the ride, a diesel pickup just wasn't a proper family wagon. Then a friend spotted an '00 Suburban for sale in Colorado on eBay that had a Duramax diesel swapped in, and the glow plugs in his eyes lit up.
Bub caught the next flight to Denver and discovered a rig from a fledgling company called Duramax Suburban (303/888-8388, www.duramaxsuburban.com) that looked like it had a factory-original diesel. After doing the deal, he drove the truck straight home to Southern California in 13 hours and then loaded it up for a two-week vacation in the desert right away, all without a hiccup. Since then, he's put 50,000 miles on the Suburban, and it has been smooth sailing the whole way. 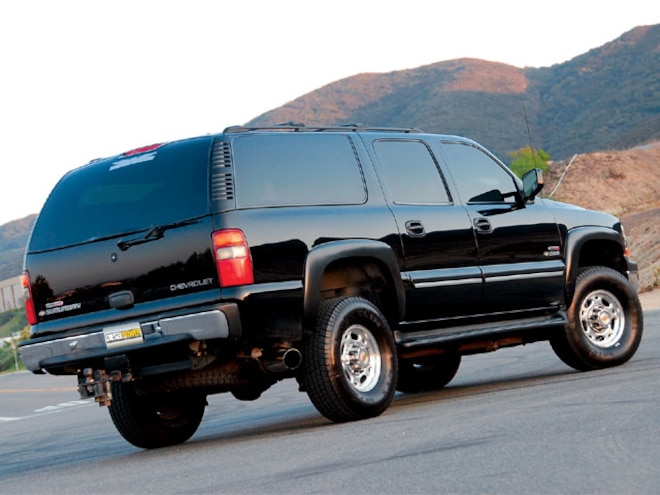 View Photo Gallery | 7 Photos
Photo 4/7   |   2000 Chevy Suburban rear View
The Swap ShopDuramax Suburban was founded in 2002 by Buff Williams, a self-described car nut who only recently has come to appreciate the virtues of oil-burners. A few years ago, he dismissed diesels as being slow, noisy, and smelly. Then a friend who's a diesel mechanic suggested that Buff take a diesel out for a drive that had a performance chip in the computer.
"I never had driven a diesel and didn't know about chipping the engine," Buff says. "Then I got in one and threw the switch on a hill. I was so hooked, it wasn't even funny." Yeah, that sounds really familiar. It's kind of like your first big romance-you just have to experience it to understand.
Anyway, Buff's friend and mechanic, Ed Erekson, had already wanted to do a diesel conversion on a Suburban, and with Buff's newfound passion, he agreed to fund the project. Little did they know it would take about a year of hard work and lots of programming time on the engine computer, even with some help from a GM software wiz. 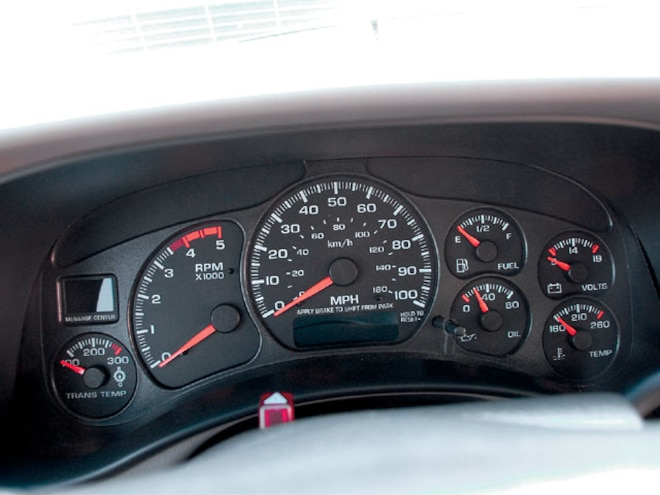 View Photo Gallery | 7 Photos
Photo 5/7   |   2000 Chevy Suburban gauges
"The biggest difference between our diesel conversion and other projects is that we figured out how to make the computers talk to each other," Buff says. "We got the Suburban's computer to adapt to the signals from the Duramax." The result is a seamless, integrated engine-management system that can even work with the OnStar diagnostics, Buff notes.
Indeed, Bub Broten says whenever he pulls into the Chevy dealership, the service writers and mechanics swarm to the engine bay and can't believe it's not a factory install. After 50,000 miles of driving on the diesel, Bub says the only problem he's encountered is an injector failure, but that wasn't related to the conversion. Also, the 3-inch body lift makes the vehicle a little more top-heavy in the handling, but that's not a significant issue.
Duramax DetailsDuramax Suburban conversions are available for '00-'06 Suburbans and use '01-'06 Duramax engines. Buff says he tries to keep the engine model year the same as the vehicle's, or at most, one year apart. He prefers not to tackle the '03 model because of the injector change during that year.

View Photo Gallery | 7 Photos
Photo 6/7   |   2000 Chevy Suburban right Side View
Typically, the conversion takes about 300 hours-or six weeks-but that depends on the source of the drivetrain, whether new or used, and if it's supplied by the customer or the company. Sourcing all the conversion parts takes a couple of weeks, Buff says, and the labor takes another four. The components basically consist of the following:* Fuel lines * Tank floats* Driveshaft* 3-inch body lift * New gauge instruments* Custom air-conditioning lines* Double insulation in the hood and firewall* New tires (285/75R16 Michelin LTXM/S to fill wheelwell)* 4-inch MagnaFlow stainless steel exhaust with 22-inch muffler * Heavy-duty hitch
In addition to pulling out the factory gas engine and dropping in a Duramax/Allison drivetrain, the labor involved includes flushing the fuel tank, reprogramming the engine computer (and sometimes replacing it), and lifting the body to make room for the Allison. The factory diesel cat is enlarged slightly at the ends to accommodate the larger exhaust tubing. And some model years require modifications on the engine mounts.
If the customer supplies a Suburban and a complete diesel donor vehicle, the conversion components (not including the engine and tranny) cost $9,000, and labor is another $16,000. For an extra $3,000, Buff will put the leftover gasoline engine into the diesel donor.

View Photo Gallery | 7 Photos
Photo 7/7   |   2000 Chevy Suburban exhaust
If Buff supplies the drivetrain, he charges $35,000 for a vehicle with a used Duramax setup and $45,000 for a new unit from Detroit. For the used drivetrain, he'll buy two vehicles and swap the engines, and later, he'll sell the one with the gasoline transplant.
21-MPG SuburbanThat all might sound simple in theory, but it's obviously a bit more complicated in practice. Even so, Bub says the results are worth it. Fuel consumption on an 8.1L gasoline Suburban ranges from 8 to 14 mpg, depending on the load, but Buff says a Duramax Suburban can get as much 21 mpg on the highway, lightly loaded, and 15 mpg towing a loaded trailer over the Continental Divide. And the tow rating comes in at an honest-to-goodness 10,000-12,000 pounds-no stress, no strain.
Despite the 900-pound increase in overall weight with a Duramax under the hood, the difference in performance is startling. "That Duramax pushes the Suburban around like it's a Corolla," Buff says with a grin. And that's without a chip, which Bub plans to add later on, along with some other upgrades-a six-inch lift and a conversion to an '04 front fascia.
In the meantime, the factory setup is really smooth, as Bub's wife, Toni, confirms (she's the primary driver of the vehicle). "I feel invincible in this truck," Toni says with a laugh. "I go anywhere I want, and there's no stopping me with all that power." Hey, if a diesel Suburban makes the wife happy, then it's all worth it, right?