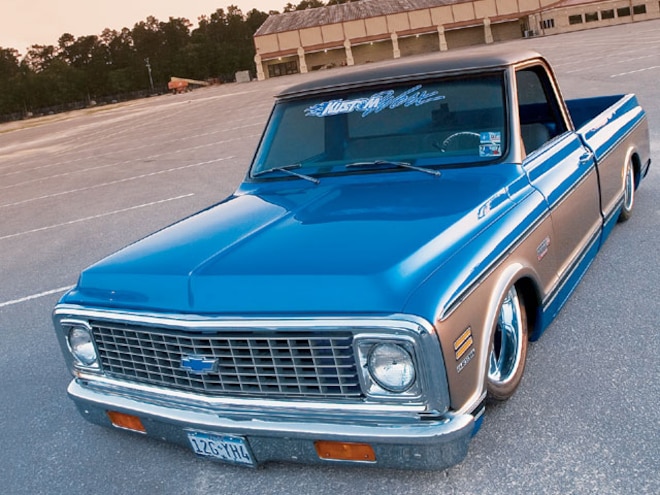 View Photo Gallery | 18 Photos
Photo 2/18   |   1971 Chevrolet C10 front Drivers Side View
Cory Scott's '71 Chevy truck is incredibly deceiving, to say the least. It looks like it's just a really cool classic truck, hammered over 22s, but if you take a closer look at the body, you will realize that what looks like the original trim has been completely painted on. You might be asking why someone would do so. The fact that Cory is the owner of a paint and body business named Kustom Werx in Conroe, Texas, may give you some indication why it has a trick and misleading paintjob. 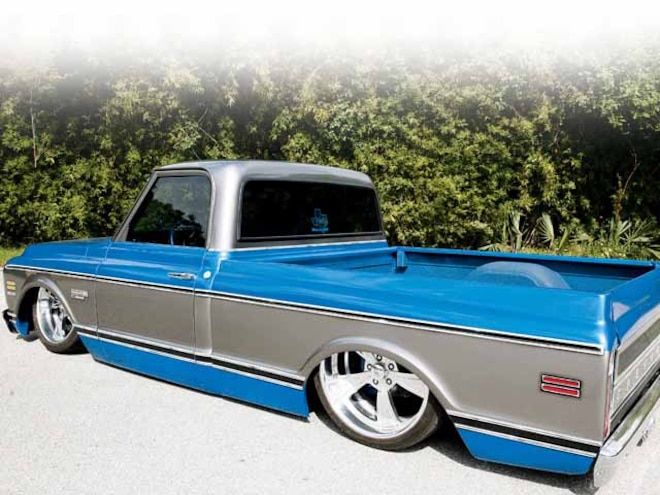 View Photo Gallery | 18 Photos
Photo 3/18   |   1971 Chevrolet C10 rear Drivers Side View
As a true fanatic of modern and classic Chevy trucks, Cory has blatantly shown his passion for these vehicles in his most recent customs. For example, his '85 Chevy C10 featured in our Dec. '06 issue was more like a restoration than a wild show vehicle. The purpose of that truck was to capture a timeless OE style with the benefits of a modern airbagged suspension. Going with that sort of theme, Cory ensured that his truck would never go out of style, unlike the other show-stoppers with crazy graphics. The '85 was a definite hit with everyone, and once it was completed, Cory felt the need to do something similar with a different type of Chevy truck. 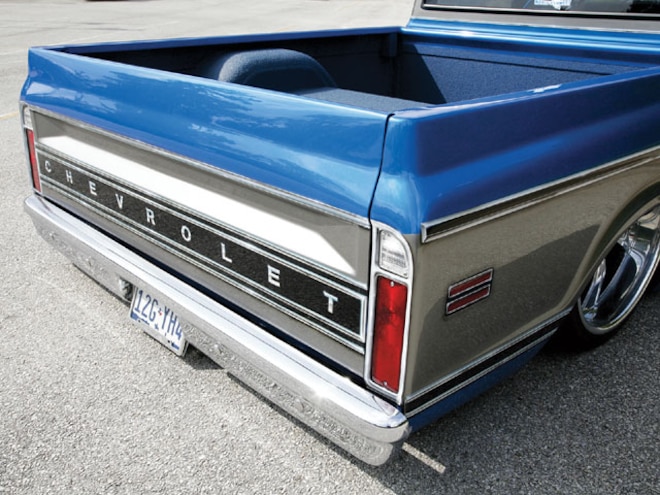 View Photo Gallery | 18 Photos
Photo 4/18   |   1971 Chevrolet C10 tailgate
His second favorite Chevy to the square-body is the '67-'72 C10 that has the more rounded lines. With the notion of customizing one, Cory searched the internet to see if there were any of them in good condition and free of rust. He quickly found the perfect candidate for the project, a recently restored '71 Chevy that was garaged in Fort Smith, Arkansas. Cory immediately called up the owner and took the 480-mile trip from Houston to pick up the truck. 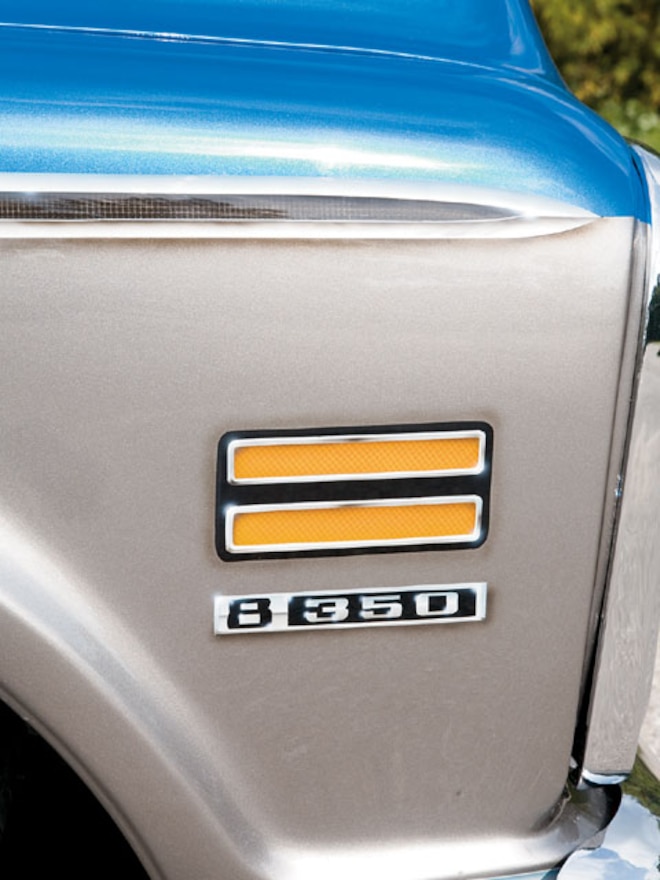 View Photo Gallery | 18 Photos
Photo 5/18   |   1971 Chevrolet C10 b350 Emblem
Once the truck was at Cory's shop, he took some measurements to see how big the wheels could be when the chassis was airbagged and laying on the ground. He figured that 22s would fit and purchased the proper wheel and tire combination. Then, Cory started by dismantling the rear suspension and fabricating a triangulated four-link. For the front, he sought out the help of Bill Carlton of Ekstensive Metalworks to make a custom pair of upper and lower control arms to work with a set of 2-1/2-inch drop spindles. This allowed the truck to lay on the front crossmember, and to get the frame level on the ground, the front section was Z'd 2 inches.
When the suspension was done, the truck looked like a finished custom because the body was already fairly straight and in a single orange color. Since it looked so good sitting over new rollers, Cory decided to take it to two major shows to test the waters. It was an instant hit while the project was still only in its beginning stages. Even though it fared well in the show circuit, Cory still felt that he had to rebuild the truck to make it better represent him. 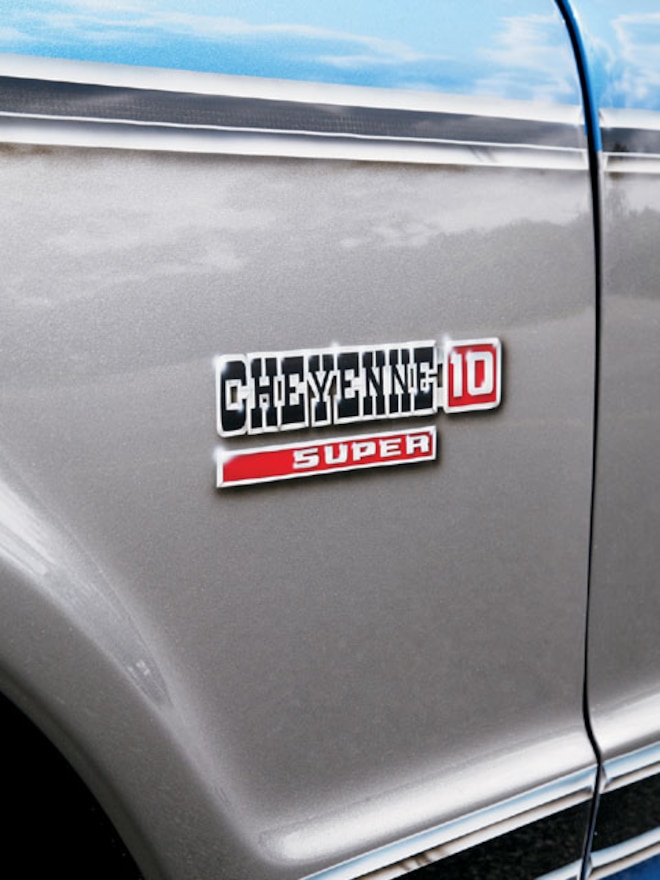 View Photo Gallery | 18 Photos
Photo 6/18   |   1971 Chevrolet C10 cheyenne Logo
After the show season slowed down, Cory tore the truck apart and started from the ground up, cleaning the chassis and motor for paint. The frame was then painted PPG Greystone Metallic, which is a darker silver that is used on newer Chevy trucks. Because Cory loves blue, he went with PPG True Blue to coat the suspension and motor. Even though these two paints seemed like an odd combination, they looked good together, and Cory was sure that they would work well for a two-tone scheme on the body. Before Cory prepped the outer sheetmetal for paint, he had the spontaneous idea to airbrush the trim and other details on. It seemed rather backward to shave all of these items and paint them back on, but Cory knew it would capture the style he wanted while showcasing the high-quality paintwork that can be done at his shop.
Cory finalized his decision on this paint scheme and prepped the body for paint. Because the markers and emblems were going to be painted on, they were shaved, along with the antenna, tailgate handle, cab seams, keyholes, and mirrors. Then, all of the sheetmetal pieces were worked smooth and disassembled for the coats of paint. Once the body panels were sprayed in those same PPG paints, the truck was reassembled for the heap of detailed airbrush work. To do this, Cory hired his regular in-house graphics man, Pat Maxwell, to handle this tedious task. For some extra insight on how the realistic chrome airbrushing was achieved, you can flip these pages to a special article in our tech section. 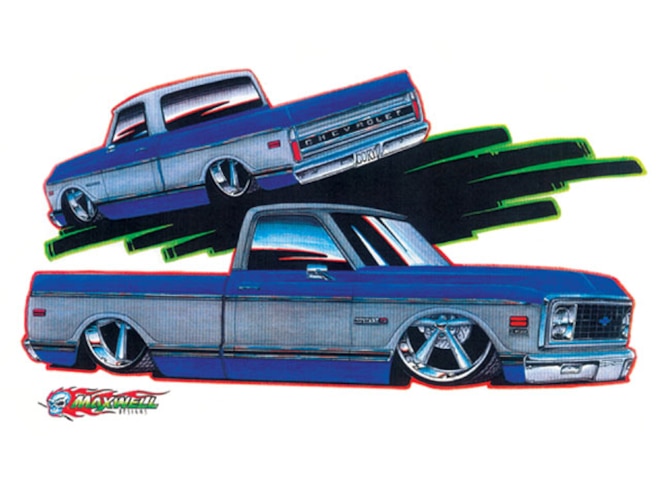 View Photo Gallery | 18 Photos
Photo 7/18   |   1971 Chevrolet C10 artist Rendering
Next, the body panels were finished in clearcoat, leaving the truck close to completion. All that was left to do on the outside was to clean up the doors with a Brothers one-piece window kit and to spray the bed with a color-matched liner. On the interior, the factory bench seat was sent out to Junior's Upholstery to be covered in leather with a simple non-distracting design. Then, the folks at Billet Accessories Direct helped Cory out with a Tuner billet steering wheel to accent the subtle interior.

View Photo Gallery | 18 Photos
Photo 8/18   |   The 350-cid small-block that was in the truck already worked fine, and Cory did not crack it open.
The goal was to get the '71 Chevy ready in time for the '07 GatorDrag show because it is the first major event in Cory's surrounding area. With a ton of hours spent working on the truck during the winter season, Cory finished it right on schedule to debut at the springtime show. As the truck made its first appearance, it was funny to watch the looks on showgoers faces when they came across this truck. You could see that they would first see it as a clean, original custom truck, and when they would notice all of the detailed paint, they were in a state of shock. In the end, Cory got exactly what he wanted out of this truck with its overall factory appearance. It's difficult to comprehend the effect that was pulled off with the trick paintwork, but with the right talent it was all possible to create.
The 411