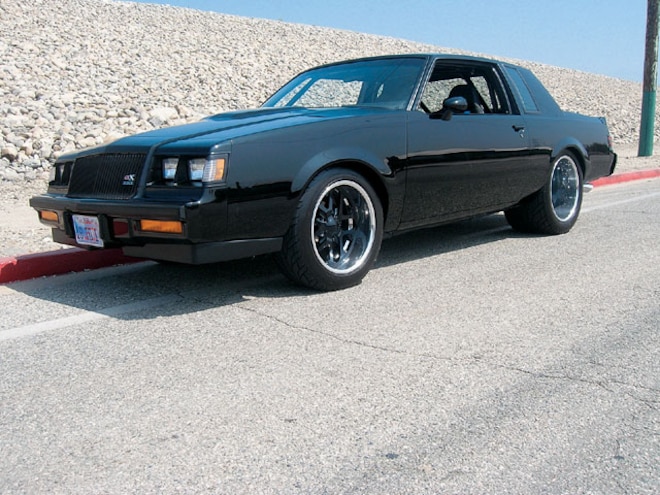 View Photo Gallery | 16 Photos
Photo 2/16   |   1982 Buick Regal left Front View
Back in the mid-'80s, Buick produced the Grand National, one of the quickest production cars of its time. Powered by a turbocharged 3.8L V-6, the car was capable of 14-second quarter-mile times stock and able to dip into the 13s with minor tweaking and a set of slicks. When we first noticed this black diesel hot rod on the Internet, we thought, "Oh, neat, a Duramax Grand National clone-he kept the turbo theme, but added a diesel." When we actually saw it and sat down and talked with owner David Morad, we realized this Buick just may be one of the most incredible diesel-powered vehicles we've ever seen. Don't believe us? Read on, and you'll see what we mean.
It all started about two years ago when David decided that although he loved his LB7 Duramax truck, he felt the diesel engine would be even more awesome in something a lot lighter. But what? He liked cars with newer interiors but didn't want to be hassled by the smog police, so the idea of a Grand National with a Duramax was born. 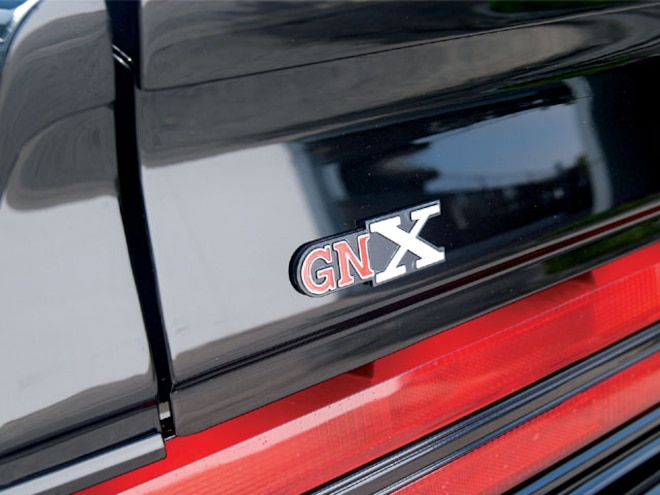 View Photo Gallery | 16 Photos
Photo 3/16   |   1982 Buick Regal gnx Logo
After his decision, David spent another year collecting anything he could that was Grand National-a hood, fenders, taillights, and bumpers were all acquired from parts traders, eBay, or wrecked GNs. Then he found the perfect car: an '82 Buick Regal diesel. The car had been converted to gas but was originally a diesel vehicle, so a Duramax would be a perfectly legal swap as far as the DMV was concerned. Then disaster struck. On the way home, the Regal's gas engine sprang a fuel leak, and the entire car burned to the ground. 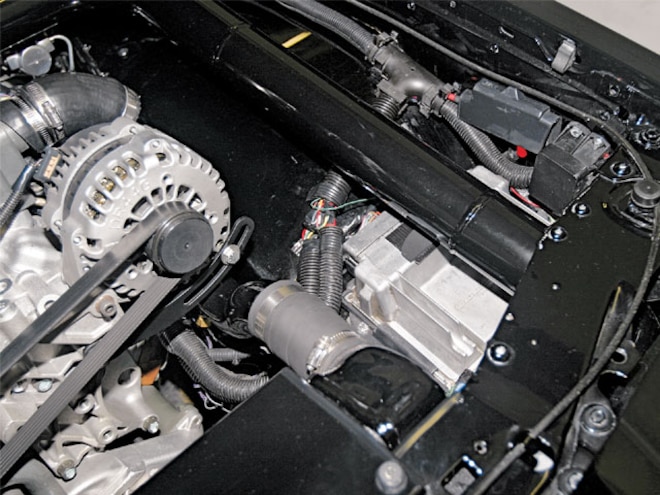 View Photo Gallery | 16 Photos
Photo 4/16   |   The engine's computers are cleanly tucked away on one of the custom fenders. With separate wiring systems for the engine, transmission, and vehicle itself, the electrical work on this car must have been a nightmare.
Determined to stick with his plan even if he had to do it the hard way, David found an '81 Oldsmobile diesel and started again. The body modification list to turn the Olds into a Buick clone was immense. The car was cut in half, and the back clip was welded on from a Buick Regal to make it look like a Grand National. Then the parts were added: a hood, bumpers, a trunk lid, taillights, emblems, and David even went to such lengths as finding an original GNX dash plaque (a GNX was a special version of the Grand National) and aluminum bumper supports from an original GN. The deception is enough that he has actually been yelled at for doing that to an original Grand National. If that's not enough, the car's entire floorpan was cut out and raised up a couple of inches to make room for the big diesel's exhaust.
After a bit of calculating, David soon realized the stock chassis wasn't going to cut it, so an Art Morrison front-strut subframe was added along with a set of cross-drilled Wilwood disc brakes and a rack-and-pinion steering setup. For the rear, Art Morrison was used once again, this time supplying a four-link setup designed for a fully tubbed vehicle. Out back, a Ford 9-inch rearend with 35-spline axles, a nodular centersection, and a Detroit Locker provide all the strength and traction necessary to propel the Buick to warp speeds. Because of the diesel's low-rpm powerband, the rearend was fitted with a 3.23 axle ratio.
With the body and chassis sorted out, it was time to fit the engine and transmission. Just like with the previous steps, David took no shortcuts. The firewall (which originally had A/C) was smoothed and notched for exhaust clearance. Once custom mounts were built for the engine, inner fenders were formed out of aluminum to give the entire engine bay a smoothed look. David wanted to keep the stock hood line, so a custom oil pan had to be made for the engine, the oil pick up had to be modified, and the filter had to be relocated underneath the driver seat. David also didn't want a huge bulge in the interior of his ride, so a 4L85E transmission (the one that comes in Duramax-equipped vans) was used instead of an Allison, and it was installed on a custom transmission mount.

View Photo Gallery | 16 Photos
Photo 8/16   |   David made sure to plan ahead, even as he was building the car, so a second pump was added in case he ever needed more power. Right now, it's not connected, but once the turbo is upgraded, it will be.
With everything mounted, David had to deal with the incredibly time-consuming task of getting the parts to play nice with each other. The '01 LB7 was kept mostly stock, but a second custom low-mount CP3 pump was added (stock hood line, remember?) in case more fuel was needed at a later date. To send all the correct programming to the engine, an entirely new GM wiring harness that was made for an '81 Oldsmobile was swapped in along with another complete Duramax wiring harness modified by Steve Cole at TTS.
A three-position switch from TTS was used with Tow, Race, and Extreme modes to give the engine some added oomph. The transmission was updated with a Trans-Go shift kit, different clutches, and a custom converter from Mike Lynwood at Inglewood Transmissions. In addition to the twin wiring harnesses already in the car, the 4L85E uses a Compushift standalone controller that allows shift-point changes, throttle-pressure adjustments, and much more.

View Photo Gallery | 16 Photos
Photo 9/16   |   The end result of all the clearance headaches that David faced was this: a low stance with a stock hood line, something that we thought to be impossible with Duramax swaps. The "18 to 1" license plate is a nod to the Duramax's compression ratio and tells onlookers this is no ordinary Grand National.
Still, the work wasn't over. An electrical-pump-driven brake system was employed to keep the discs happy, the steering was modified, and an aluminum fuel tank (which took two weeks to fabricate) was shaped and slanted to fit underneath the rear of the car and still holds more than 20 gallons.
Every little detail on this car went through extensive planning and testing before being added, and in the end, David has a vehicle that few of us will ever own-one that was planned and built entirely the way he wanted (and entirely from scratch). Even though it was built to show-car standards, David refuses to let it collect dust. In fact, it's his daily commuter. David reports that the 4,450-pound GNX clone gets about 28 mpg on his daily drive to work and has gotten a best of 36 mpg on the open road.

View Photo Gallery | 16 Photos
Photo 10/16   |   1982 Buick Regal left Side View
But is Dave finished? Heck no! A recent trip to Irwindale Speedway netted him an 8.25-second eighth-mile time at 85 mph. In quarter-mile terms, that translates roughly to the high 12s, and David isn't satisfied. Next time at the track, the car will be on a set of drag slicks and a 245hp tune, and David will be shooting for the 11s. He also said he plans to upgrade the turbo in the future because he still has more fuel to play with.
When David finally finished his two-year story of perseverance, we were exhausted from just listening to all the blood, sweat, and tears (not to mention cash) that he had invested in the car. Our conversation with David had taken well over an hour just to get all the basics on the vehicle and left us with a great respect for his Duramax-GNX and the distinct feeling that his ride will be a hard one to top.