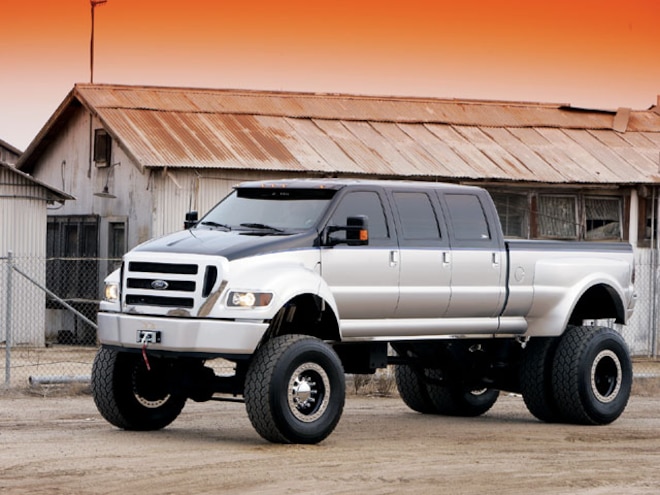 View Photo Gallery | 12 Photos
Photo 2/12   |   ford F650 left Side View
Doug DeBerti is, more or less, a household name in the custom-truck industry. Come hell or high water, he always manages to slip a couple of Ford trucks through the cracks into the annual SEMA Show, without anybody knowing what he's really up to. As such, this past show in Las Vegas held a certain surprise for us in the form of a stretched Ford F-650. With four doors gullwing modified, and two other doors Lambo-style, we couldn't help but delve in further to see what makes this behemoth tick. 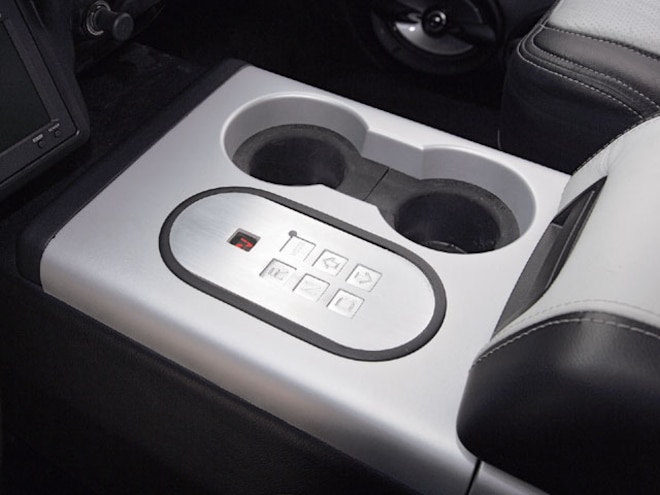 View Photo Gallery | 12 Photos
Photo 3/12   |   Looking like a futuristic remote control that would be more at home in a sci-fi movie, the push-button control handles the six-speed Allison transmission.
Standing in at parking-structure restricted height, DeBerti's six-door Ford rides high on air. No, this truck isn't with the angels, but it is with Goodyear. Altering the front and rear height is a quad setup of Goodyear air springs. Fabtech remote reservoir 4.0 Dirt Logic shocks manage to damp the front-suspension bumps with dual units per wheel. An extra four pack of Fabtech 4.0 nitrogen-charged shocks keep the rear axle under control, as well. The 30 inches of lift stem from modified front and rear suspension, airbags, and a one-off pair of MB-powdercoated custom ladder bars. An Air Ride Technologies controller keeps the four Goodyear airbags under full driver control at the press of a digital control. With help from Paul Temple, DeBerti created the massive rollers to fit under the truck. Painted black and measuring in at a whopping 22-1/2 inches, the wheels feature polished bead locks and are wrapped in Bridgestone M844 tires in a ludicrous 445/65R22.5. Moving this cumbersome mass is a Caterpillar 7.2L turbo inline six. The out-of-the-box power comes in at 330hp, but thanks to some modifications from TS Performance the diesel now sports nearly 400hp and 1,100 lb-ft of torque. Meanwhile, an Allison six-speed automatic puts the power to the wheels. 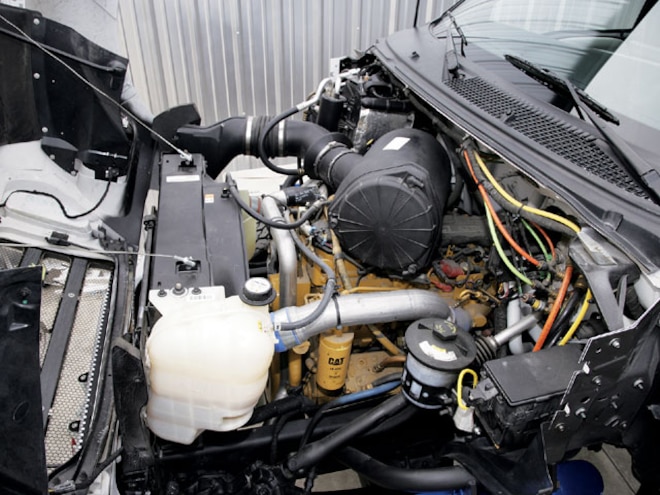 View Photo Gallery | 12 Photos
Photo 4/12   |   ford F650 engine View
The most obvious of modifications done to the truck is the stretched body and chassis. Instead of the F-650 four-door configuration, DeBerti's rig is sporting six full doors. Stretched by the Alton Corporation, the doors on this ride aren't of your garden variety. Both front doors open vertically, courtesy of LSD, but it's the rear four doors that seem to drop all the jaws. Normally, just having a pair of gullwing doors would be cool, but this Blue Oval is fit with two pairs of gullwing doors. With everything opened up, the truck takes on a whole new personality. Minus the height, access to the interior is no longer an issue. To help get you up in the truck are power steps from Amp Research. One-off rear fenders, that began life as a 3-D computer program, do their best to cover the massive four-pack of rear rubber. PPG was sourced for the color and San Joaquin Paint and Body laid it down. Air Syndicate handled the colored stripe and the truck was finished in custom knick-knacks. DeBerti handles the custom headlight covers and monstrosity of a trailer hitch, while In Pro Car Wear taillights fill in out back. Other goodies include a Pace Edwards tonneau cover, C.L. Laurence power rear windows, Grippin' Billet door handles, Recon third brake light, dual Warn 16.5ti winches, and finally, a Street Glow underbody lighting kit. 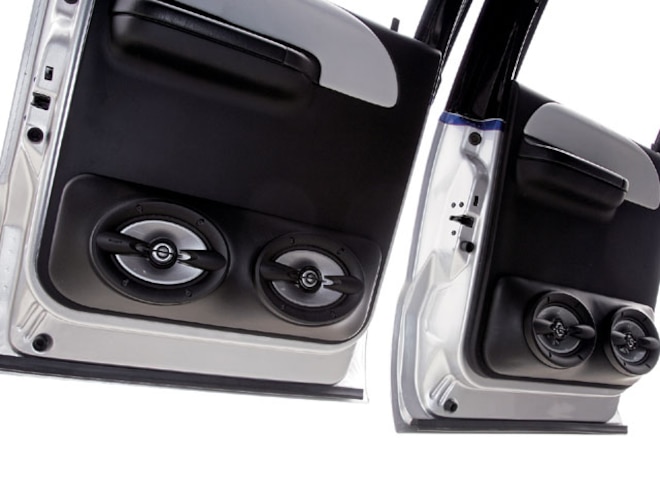 View Photo Gallery | 12 Photos
Photo 5/12   |   ford F650 sony Speakers
It takes a ton of leather to fill a cabin this large; normally anything with this much room is called a limousine. Six Superior Seating captain's chairs fill the truck's interior and are wrapped in black and white cowhide. Like a big-rig, all six chairs ride on air mounts, and for added comfort, are also stuffed with heating and massage inserts. Rear passengers are treated to a movie to boot, because Mobile Audio Concepts stuffed all six headrests with Sony LCD monitors. A DVD source feeds the visual displays, while Sony Xplod speakers and subwoofers belt out the surround sound. Optima batteries seal the power needs, while Monster Cable wires handle distribution.

View Photo Gallery | 12 Photos
Photo 6/12   |   ford F650 dash View
As if all of this wasn't impressive, then telling you that the truck was built in a scant 90 days ought to shake your nerves. The DeBerti F-650 had a line of five deep trying to get a good look at the truck when it debuted at SEMA '06. This truck is exactly the road warrior we've been pining for, while we're sitting in treacherous Southern California traffic. Either click on the seat massager and relax or simply start bashing through cars! Either way, we would come out ahead.