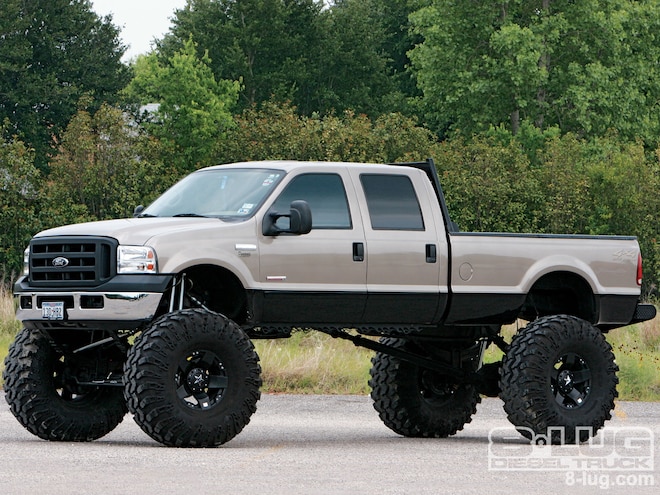 Just because it's old-school doesn't mean it's no longer relevant. The monster-truck look is a good example of how some styles never go out of style. Just ask 19-year-old Michael Schultz from San Antonio, Texas.
View Photo Gallery | 11 Photos
Photo 2/11   |   2002 Ford F350 show Truck
Michael's definitely revved up about seriously lifted trucks, and you need look no further than his black and tan '02 Ford F-350 to see he means real business. To get a better idea why he does what he does, you've got to look back to when he was no taller than an off-road tire, being towed around by his dad from truck event to truck event. At the age most kids start to learn their ABCs, Michael was home-schooled in all things monster truck.
Michael still remembers the day his father, who was totally immersed in the scene, took him to see the first monster trucks at the rise of their popularity in the late '80s. And that sparked a passion that's continued into adulthood. "From that point on, I always wanted big, lifted trucks," he says. "And now that I got one, I want something even bigger." True to his words, shortly after we snapped these photos, Michael was already knee-deep into adding another 19 inches to his truck's overall height using a four-link suspension setup fabricated by BNC Off Road. (Check out its progress at www.bncoffroad.com.)
When 8-Lug caught up with Michael at a custom truck show in Texas, this totally custom F-350 was already turning heads on the show circuit. But Michael thinks of it more as a daily driver, and he's not afraid to put it to good use around his parents' ranch. "You should see the look on people's faces when I pull up at the feed store here in San Antonio to buy hay," he says. "The kids get freaked. It's quite a shock." As pictured, Michael's truck features an 18-inch leaf-spring lift kit from Atlas; nitrogen-charged Pro Comps with reservoirs; and beautiful, flat-black, 20x12-inch KMC XD Rockstar wheels wrapped in popular 49-inch IROC Super Swampers.
Under the hood, the powerful 7.3L Power Stroke diesel is still stock except for the MagnaFlow 5-inch exhaust. With such a dramatic lift, Michael had to swap the stock gears for 5.13 ring-and-pinions (front and rear) from Yukon Gear & Axle, and he lengthened the driveshaft to accommodate the new geometry.
One thing is certain: While the stance of this rig is very cool, the Kenwood audio system is outrageous. Featuring the 25th Anniversary XXV-05V head unit, the truck also has subwoofers that were enclosed in fiberglass by Shayne Maggio. Eight 6.5-inch components were fully 'glassed into the doors to run two 12-inch subwoofers, which were also 'glassed into the back wall. Then there's the battery of video monitors that drive up the intensity of the visuals.
The next time we see this F-350, it's going to look a whole lot different, although one thing that probably won't change is Michael's appreciation for all things big. He's from Texas. We wouldn't expect anything different.