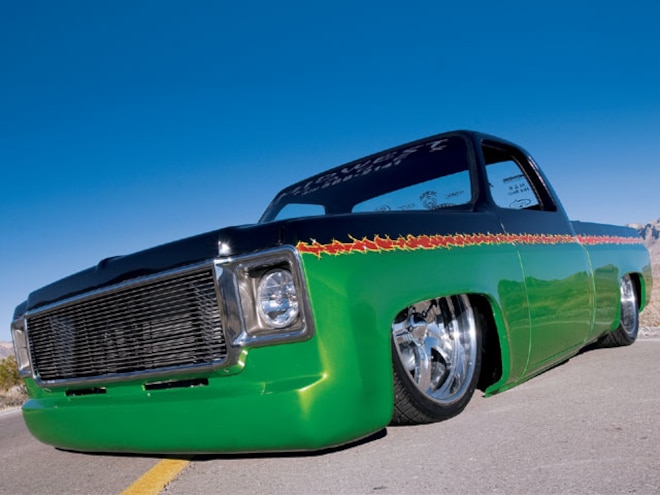 View Photo Gallery | 12 Photos
Photo 2/12   |   1980 Chevrolet C10 front Drivers Side View
There's a building in New Baden, Illinois, that most women of the area are quite familiar with. If you park up front and walk in the front door, you'll be greeted by Mike Cotten's mom, Sue, who expertly stitches wedding dresses for local brides. That's where the women get happy. The men, however, prefer to walk down the side alley to the back of the building that houses Mike's shop, Midwest Images. It's here that you'll find Cotten usually grinning from ear to ear, cutting up sheetmetal, and spouting kung fu references from his favorite video game, "Street Fighter." The video game console is in the front of the shop, ready for break time, in case you were wondering. 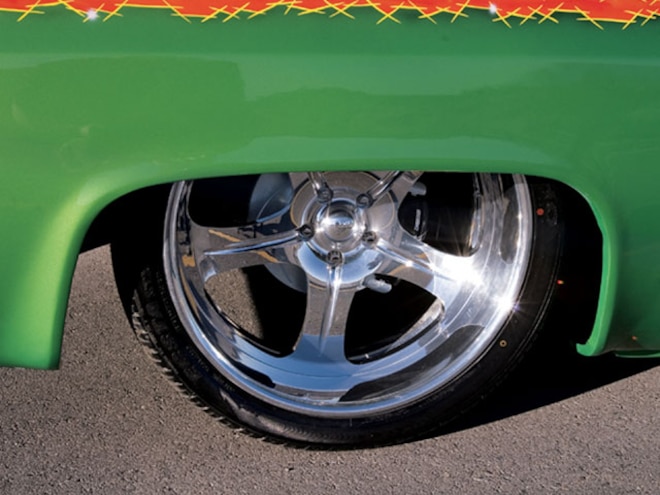 View Photo Gallery | 12 Photos
Photo 3/12   |   1980 Chevrolet C10 custom Wheel
Mike's the most hard-core type of gearhead we know. The passion for creating automotive works of art runs deep in him, and it doesn't end when he closes the door of his shop and heads home to his family. If you walk into the kitchen inside his house, you can't help but notice that the skilled painter and family man covered the floor in metalflake. Downstairs, you'll find a mini bar, fashioned from half of a Chevy S-10. Mike eats, sleeps, and breathes hot rod trucks, so it always seemed funny to his dad that he didn't have a nice one of his own. Like a lot of shop owners and fabricators, the customers and bills come first, and Mike's own ride comes second.
After a bit of ribbing from his dad during a time when Mike's shop was in its infancy, Mike finally started working on this '80 C10 so he could have a nice lowered truck to cruise in. His dad passed away during the construction of his truck. Mike vented the frustration of losing his best friend by spraying a one-off graphic job on his casket and also building a custom grave headstone out of steel, and then he set about finishing his Chevy. He would build it in honor of his dad and finish it in time for a debut at the big SEMA Show in Las Vegas. Out came the Sawzall and a pack of fresh blades, and down went the Chevy. 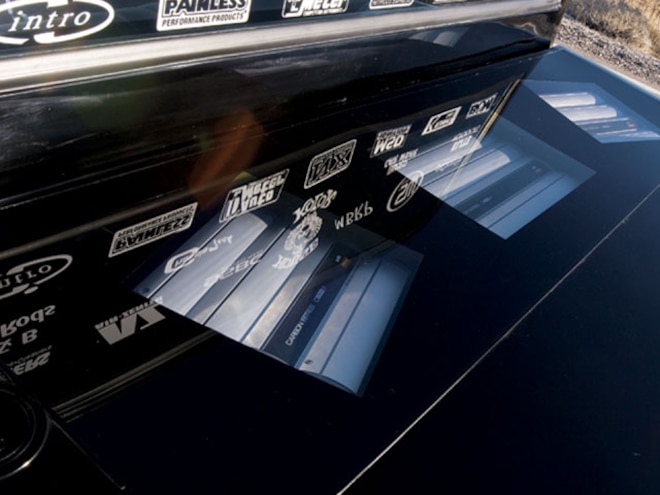 View Photo Gallery | 12 Photos
Photo 4/12   |   1980 Chevrolet C10 custom Amps
Mike likes the rake of traditional hot rods, but he didn't want to spend a bunch of time reworking the front crossmember of the C10, so that the framerails would lay down when the air was released from the suspension. Instead, he performed a 7-inch body drop, which was more than enough to get the rocker panels even with the bottom of the 'rails. He had no intention of allowing the rear of the truck to lay out, though, because again, he wanted to maintain a classic raked stance, even when the truck was parked. Instead, he tubbed the bed and notched the rear framerails just enough to fit a monster set of 24x11-inch Intro wheels and Kumho tires. With a set of deflated airbags at all four corners, the stance is one that hasn't been mainstream among the sport truck crowd in more than a decade, which makes Mike's truck stand out all the more. In case you were wondering, the seating isn't uncomfortable either, because Mike reworked the cab floor to lower the seats down after the body drop. 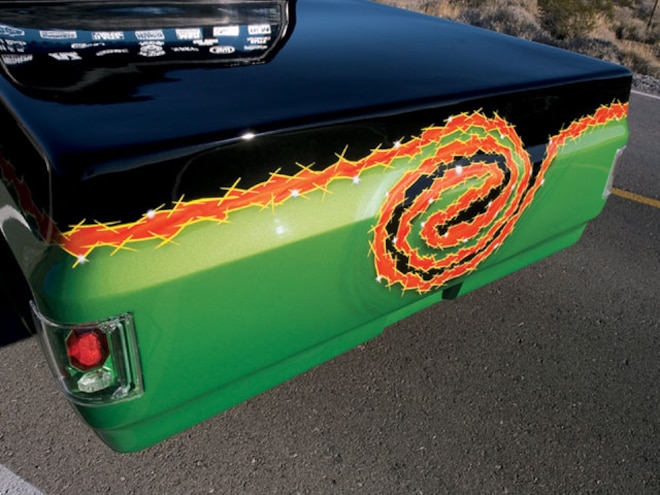 View Photo Gallery | 12 Photos
Photo 5/12   |   1980 Chevrolet C10 custom Tailgate
The graphic element that Mike sprayed on his dad's casket found its way onto the tailgate of Mike's truck, but the homage to his father doesn't end there. The colors were his dad's favorites. Years ago, Mike painted a car in the same eyeball-searing green paint, and his dad fell in love with it, so it was a natural choice for the truck. He combined the green with black and broke the two opposing colors with red, orange, and yellow, but not before executing some slick body mods.
The traditional shave job is present, but there are a few other ideas Mike had that you might not notice unless you obsess over square-body Chevy styling. First off, the front of the rocker panels were pie-cut and pulled downward to match the front fenders. On a stock truck there's a variation in height between the two that Mike wanted to rid his truck of. When the truck is sitting level, you can see where the front of the rocker is lower than the rear, but when the truck is raked, it looks just right. After ditching the stock front bumper, he added a front roll pan with a twist; he extended forward the small valance beneath the grille shell until it met up with the new roll pan, giving the pan the look of a smooth bumper that's molded into the body. Mike also cut open the four vent slots under the grille into two larger openings and ditched the turn signal holes. The details are small, but they are there and work well together. 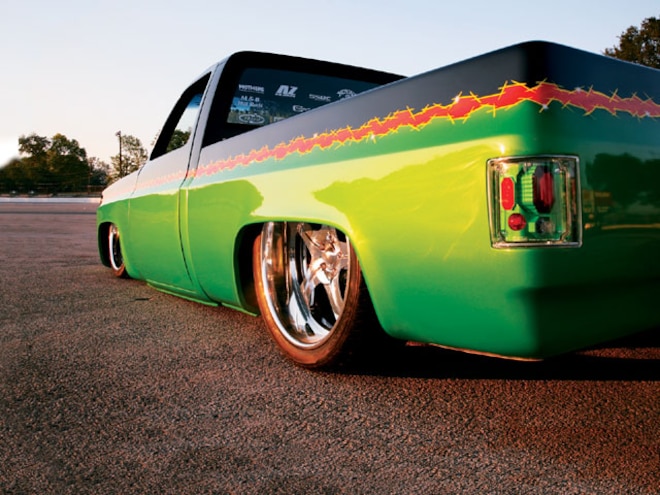 View Photo Gallery | 12 Photos
Photo 6/12   |   1980 Chevrolet C10 rear Drivers Side View
The most obvious mods are the ones that gave Mike the most trouble. Keeping the bed straight when capping the top of it and molding the entire structure shut isn't easy. Many hours went into ensuring the bed was straight enough to coat in black paint. The fabricator also hated the look of the factory vent windows, so he removed them and set about making his own one-piece power window arrangement. He came close to finishing the window project, but when he couldn't get a set of curved glass made in time for the truck's debut, he again got out his tools and ditched the windows altogether. Instead of a glass shield between him and the world, Mike opted to build a new dash that flowed onto the doors and covered up the stock window openings. It's bitchen to look at, if not an impractical arrangement on those rainy Illinois days.

View Photo Gallery | 12 Photos
Photo 7/12   |   1980 Chevrolet C10 custom Interior
Nice guys are supposed to finish last, right? That's how things are supposed to work in the real world. Mike Cotten's world is a bit different, though. His world includes his own shop, the talent to cut, modify, and paint custom trucks, and a wife that is so cool that she not only stitched together the leather interior in his C10, but she also let him spray metalflake over their kitchen floor just because he thought it would look cool. How cool is that? His dad may have left this world too soon, but we're sure he's looking down and smiling not only at the truck but at the memorial Mike created.
The 411