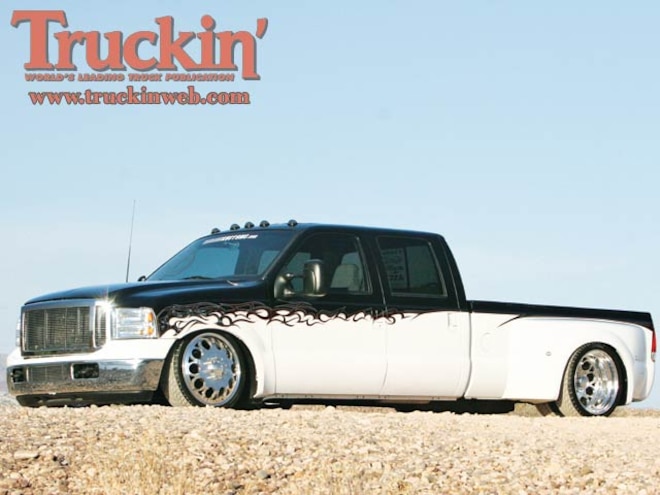 View Photo Gallery | 7 Photos
Photo 2/7   |   2003 Ford F350 Super Duty left Side
Designing and building sweet rides of all types allows Justin Veit, of Phoenix, a daily creative outlet that also serves as his therapy at his 9-to-5 at Insane Kustoms. Adding just the right accessories there, and mixing these colors here, really wakes up a truck when Justin envisions it in his head. A not-too-often occurrence happens when a hidden jewel is dropped in his hand to create something out of something-instead of the usual something out of nothing. In the case of this '03 Ford F-350, Justin used his connections to get the Ford laying low and looking good, the easy way. 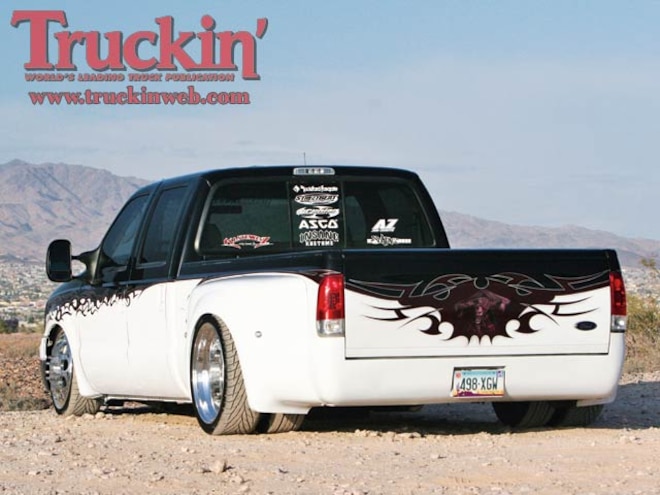 View Photo Gallery | 7 Photos
Photo 3/7   |   2003 Ford F350 Super Duty left Rear Angle
Having a relationship with the StreatBeat Customs crew, Justin was stoked when he found out they no longer needed the services of the long-time tow rig. For just the right price, Justin took it off their hands and began lining up the perfect combinations of parts. Grunion Fabrications, in Phoenix, was first to get dirty on the project, which lowered the dualie on Firestone airbags. The lowered suspension allowed Justin to swallow the new custom-cut 22-inch Brentz Wheels billet hoops. Those gorgeous wheels are wrapped in Toyo Proxes tires sized 265/35R22. This F-350 was now looking awesome, but the crew at Insane Kustoms wasn't real thrilled with the older-looking front end. 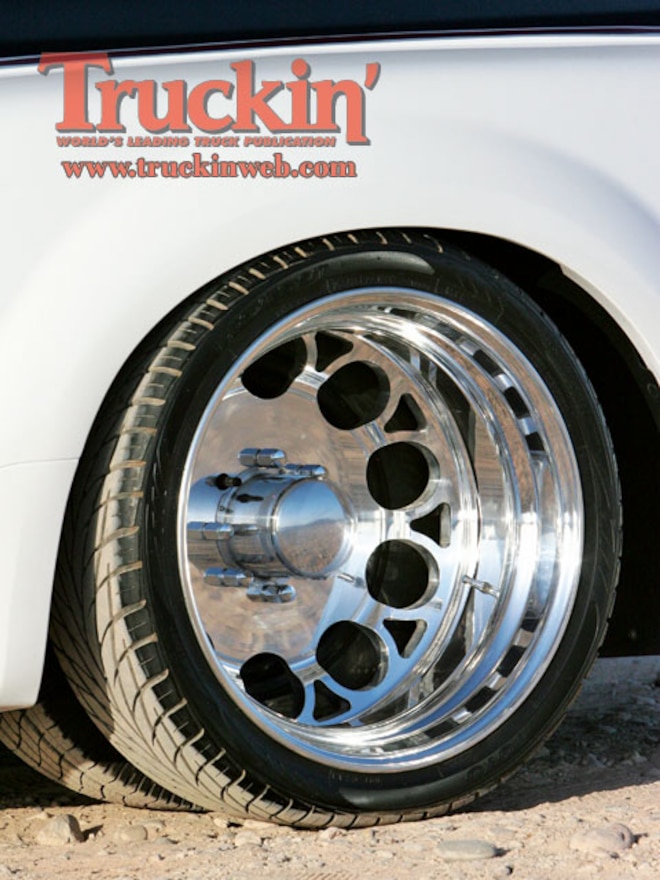 View Photo Gallery | 7 Photos
Photo 4/7   |   2003 Ford F350 Super Duty rear Wheel
Metal Asylum in Glendale, Arizona, handled updating the Ford by adding a new '05 F-350 grille, bumper, and headlights to the dualie. Other cool mods included the removal of the rear bumper, the addition of a Grant Kustoms roll pan, and the installation of a Precision Grilles billet insert into the new grille shell. Chad at Metal Asylum then sprayed the Ford with House of Kolor Black, Brandywine, and Pearl White, with awesome tribal graphics separating the two solids. Menacing clowns can be seen peering through the graphics, which gives the paint scheme a whole new persona.
Inside the dualie is an interior that is equally as simple, yet effective. A painted dash, door panels, and plastic trim give the passengers plenty of black, whereas the Katzkin-covered seats provide some tan separation. A black suede headliner looks down on the Eclipse navigation head unit. Providing the tunes are components from Rockford Fosgate in each door, which are powered by Rockford Fosgate amps. Rockford Fosgate amps also power the multiple 10-inch subs behind the bench seat. Insane Kustsoms performed all of the interior and audio work on the Ford. Finally, tunes can be heard at high levels blasting over the 4-inch MagnaFlow exhaust.
It only took six months to turn this dualie from a tow-pig into a show-rig. Nice work, Justin. Keep the insane rides coming our way.